Share All sharing options for: ...And That's How It's Done 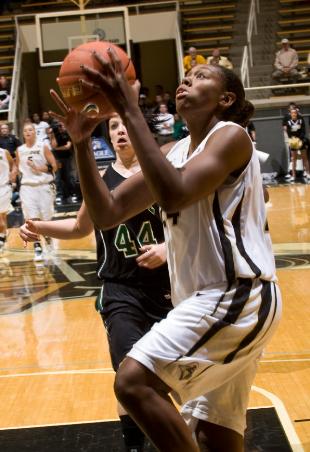 The Boilers cruised to a win in their first exhibition game last night, and the issue was never really in doubt.  They were the better team, and they played like it, and they won easily.  Take notes, football team.  Anyway, since this is my first recap, let me explain how this'll (hopefully) work.  First is what I'm calling the "Helmet Stickers" section for now.  I know it doesn't fit, but I can't think of somehting better (ideas?).

Player of the Game: Drey Mingo. The Maryland transfer was excellent in her Purdue debut, scoring 19 points on 8-for-12 shooting and grabbing 7 boards.  She also picked up three steals and drained a three-pointer late in the game, something that will give a lot of teams pause about sagging off later in the year.  Even more impressive, she did all this in just 21 minutes.

KK Houser: KK was exactly what she needed to be tonight, running the break well and knocking down her free throws.  She ended up with 16 points, 6 assists, and 5 rebounds in 27 minutes.  This was a rinning game, and several of those assists were on beautiful outlet passes downcourt to set up breakaway layups.

Brittany Rayburn: Ho, hum.  17 points, 3 assists.  Nothing to see here, same old, same old.  And that is one of the highest compliments that can be paid to a player.  She shows up every night, and doesn't need to take every shot to score.  Brittany didn't dominate this game, but she picked her spots well and still got her 17.

Next comes some quick-hit thoughts about the team as a whole:

Ordinarily I'd mention areas of concern next, but there really weren't any this game.  So, on to the final analysis.

In sum, this was what an exhibition was supposed to be.  Everybody played and played well, we destroyed a lesser opponent, and no one got hurt.  We got past the first-game shock, and now we're into the swing of things for the real season.  And that's how it's done.