It is the penultimate week in the Big Ten, and for the first time in a very long time it is not the final week of play. Everyone but Illinois is in action next week, with the Fighting Illini heading out to Fresno State for the final week of the season. The bowl picture can be officially finalized too if Illinois beats Northwestern and both Purdue and Indiana lose. The highlight of the week is the Illinois-Northwestern game at Wrigley Field, where you may see the first on-field fatality when someone faceplants against the ivy in right field.

The other storyline this week is that the Rose Bowl could be decided. If Michigan upsets Wisconsin and Iowa beats Ohio State, that would all but seal a trip to Pasadena for Michigan State of they beat Purdue.

The first game in a very weird week is the sellout bowl. I really hope Fred Glass and the Hoosiers hope this was worth it. If they had held on to this game they would have a winnable home game against the Nittany Lions, then a trip to Purdue for a chance at a bowl. Instead, they sold it out for a noon kickoff on the Big Ten Network. Indiana football is already the laughingstock of the Big Ten, but they deserve a proper public shaming for selling a Big Ten home game and making it a virtual road game. This isn't the first time Indiana has done this against Penn State. In 2000 they sold the game to an NFL stadium, but at least it was played at the RCA Dome in Indianapolis. For the record, Lucas Oil Stadium is free this weekend.

Black Shoe Diaries agree that this should be a Penn State win. Indiana has showed absolutely nothing in the last few weeks to make me believe they can win. In fact, I think Wisconsin gets 14 bonus points this week just for the Indiana defense taking the field more than 1,000 miles away. Indiana deserves to lose this game while giving up 83 points, just for selling it. Prediction: Penn State 38, Indiana 21

Even Michigan fans were shocked that their defense didn't give up a touchdown to Purdue last week. That is an indictment of our offense. Now the Wolverines, whose defense is not really any better, must face an offense that rang up the highest single game Big Ten total in over 60 years. Confidence is not high.

The Badgers still have a pretty stout defense. It is J.J. Watt's turn to go Ryan Kerrigan on Denard Robinson. Watt, generally considered to be the best D-End with Kerrigan in the league, was even stunned by Ryan's output last week, as evidenced in his tweet when he saw the stat line.

@RyanKerrigan94 jeeez man, you wanna save some sacks for the rest of us? Lol. congrats on the big game.

The Michigan offense did not impress me last week. They only managed 20 points against us, and they were given a short field each time. Teams are figuring out Robinson, and I think you'll see a step back next year because of it. Prediction: Wisconsin 38, Michigan 31

One of the biggest reasons that I am not confident about this game is that Michigan State is a solid team. They don't have a major, overwhelming strength, but they don't make mistakes, either. Since we're a team with bullet-ridden shoes, it doesn't bode well. I don't think the Spartans have to do anything special. All they have to do is not screw up and wait for us to do so.

It looks like Rob Henry is going to get the start for us, and that probably gives us the best chance at victory. I like Sean Robinson, but he has been in over his head with few targets to work with. I'm not writing him off as a future contributor, but it is clear he needed this year as a redshirt. That will likely be next year, as I see Robert Marve coming back as the starter with Henry as the backup. One thing you need to consider about our quarterback production is that they have few people to work with too. There is no Keith Smith, no Ralph Bolden, no Justin Siller, no O.J. Ross, and there has been limited Dan Dierking, Keith Carlos, Al-Terek McBurse, and Cortez Smith. That's our top 8 offensive contributors.

We still don't have a strong chance at victory. As encouraged as I have been at the play of our defense lately (especially Kawann Short and Ricardo Allen) I continued to be dismayed that we can do nothing to move the football offensively. The last time Michigan State had a 10 win season we beat them 52-28. We did not score our 52nd point in Big Ten play until our fourth game this year.

I feel like we can win this game if we can have just one performance where we don't screw up. We've been right there the last two weeks. We've been within a possession with the ball in the fourth quarter. Unfortunately, we've also had nine turnovers resulting in 1,567 points (approximately) in those two games. Again, bullet-ridden shoes. Our next injury probably will be someone shooting themselves in the foot. Prediction: Michigan State 32, Purdue 17

While I think it is cool to have a football game at Wrigley Field, have you see how close the back of the end zone is to the wall? 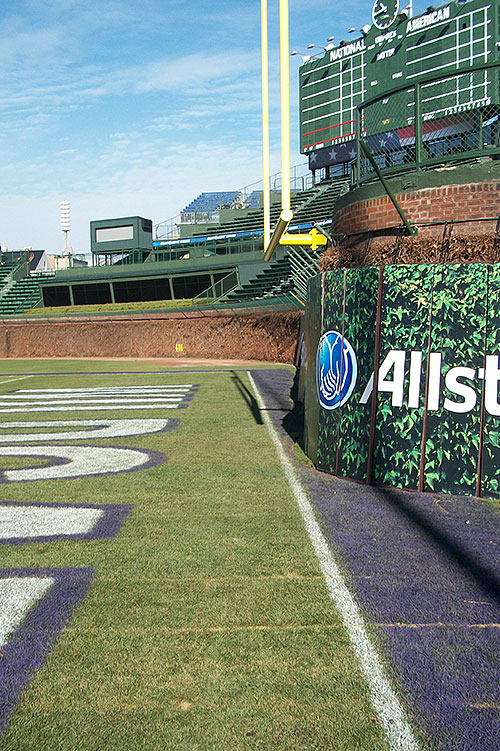 Holy crap! Someone is going to die. Yes, it is padded, but one of the reasons Wrigley is such a hitters' park is because of this wall. Outfielders naturally slow down getting clsoe to it on fly balls because IT IS A FREAKING BRICK WALL! Did no one think of this when they were trying to squeeze in a field? Did anyone bother to measure before committing to a game?

Illinois is naturally a little down after dropping a game to Minnesota last week. Still, I am kind of pulling for them because they painted the iconic Wrigley Field sign purple! As a diehard Cubs fan, that is sacriligious. The Wildcats deserve to be punished for this. The loss of Dan Persa will be too much to overcome against an angry Illinois team. Prediction: Illinois 28, Northwestern 24

I really, really hope Iowa wins this. I am tired of Ohio State winning the Big Ten. I don't think either team is as good as people are projecting, but at least Ohio State keeps winning the games it should. Right now the surest bet in Big Ten play is Iowa crapping its pants against Northwestern. It is time for Northwestern to start referring to them as just Iowa. The Hawkeyes, as our new hated rival, deserve that.

Once again, the BHGP highlight of the week is the top 10 reasons why Iowa will lose. They're probably right, too. Ohio State is starting to get into its late season groove and this has the hallmark of a game where they simply grind it out against a lesser foe. I don't think the Buckeyes are necessarily the end all/be all team somepeople think they are, but they are very good and I don't think many other teams are as good as them. If that makes sense. Ohio State 27, Iowa 17.