Share All sharing options for: Purdue Breaks Ground Against Howard 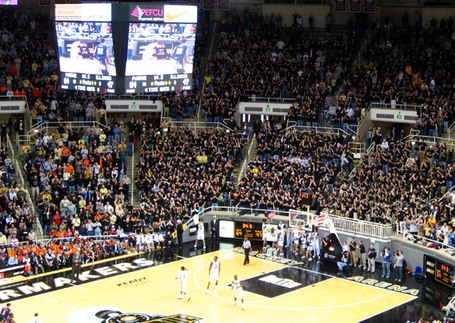 The first step in Purdue's journey towards Houston begins tonight.

The Boilermakers get their first opportunity to remind the nation that Purdue will not fade into the realm of Big Ten mediocrity.

Purdue kicks off the season hosting the Howard Bisons (1-0), who are coming off an opening win against Bowling Green.

The Bisons, who finished #8 in the MEAC last season, shouldn't give the Boilermakers too much trouble. They lack the athleticism and depth to keep the game competitive for very long.

Howard may prove to be a formidable opponent on the boards - an area of concern for the past few season. This should be a good early measuring stick for Sandi Marcius and Travis Carroll. Howard's starting five has a slight height advantage, but their depth in the backcourt doesn't compare to Purdue's (wow, feels weird to say that).

I wouldn't expect a blowout either. Matt Painter is expected to play 3 and maybe even 4 players with no game experience. I expect some growing pains for the frosh as well as chemistry issues as Painter experiments to find the right rotation.

Here are some of the things that I'll be watching for in Purdue's season opener (and throughout the season):

- The guard rotation
i.  Ryne Smith will get the first shot at the starting spot while John Hart and Terone Johnson will fight for minutes behind him. It will be very interesting to see how this one plays out. John Hart looked confident and ready in the exhibition and Terone Johnson showed that he can take over games. If Smith could be the threat he is in practice (apparently), then he'll keep job. But I've been saying that for a year and a half now. The minutes will likely go to whoever can prove to be a reliable threat behind the three-point line. (Now the AJ is redshirting, it makes this battle slightly less interesting)

ii. The point guard rotation would appear all but stable with Lewis Jackson and Kelsey Barlow, but I have a mild curiosity if that is really set in stone. If Kelsey Barlow continues to play recklessly, there might be an argument to move him to wing. TJ played PG in high school and played a little PG in the exhibition. I'm curious if Painter wants to make a move here.

- Sandi Marcius and Travis Carroll
o Tonight's game will be both Carroll and Marcius's first college regular season game. While both are true centers, they both bring something different to the table. Marcius has the physical edge of the two and has the advantage of a year in Painter's system. Unfortunately, he is relatively new to the sport and is fairly fundamentally raw. Carroll on the other hand, is much more polished offensively. I look forward to seeing how many minutes Painter will use either of them, and how the minutes will be distributed between the two. I look forward to seeing if one of them can separate themselves. We'll have 4 years to compare them against each other....

- Team rebounding
o As we've said before, this has been a curse for the Boilermakers for the last few seasons. Purdue has no excuses this year with a loaded backcourt. At this present time, I have more confidence in our guards rebounding consistently than our bigs. Prove me wrong guys, prove me wrong.

-  Will Terone Johnson the 3rd offensive weapon?
o He's obviously a great talent, there's no question about it. Purdue is looking for that 3rd offensive threat and TJ seems to be the man for that role. He'll likely start the season coming off the bench, but it'll only be a matter of time before he makes a solid case to start.

- JaJuan Johnson at the 4 spot
o Will JJ play significant minutes at the 4? Can he guard the perimeter against quicker 4's? Will he be a true threat behind the three-point line? Lots of questions about this one. Guess we'll find out soon enough...

- DJ Byrd's second year reboundo Can DJ Byrd rebound from a difficult freshman adjusting period? His worth might not be measured in the box score, but the energy and defense he brings to the court. But I'd love to see him shoot like he did in high school.

- Patrick Badeo We've heard the hype, we've seen his transformation, we bought the t-shirt. Can he rebound?

- Anthony Johnson's PT
o We've seen AJ play in the exhibition games and he's left us wanting more. But is he good enough to beat out Smith and Hart for PT? Many will obviously say yes, but Painter may not be convinced as easily

Is there anything I'm missing?