With so much buzz surrounding the recruitment of the class of 2011, I wanted to post a (low budget) visualization of Purdue Basketball's scholarship situation for the next few years. Hopefully this clears up some of the ambiguity. 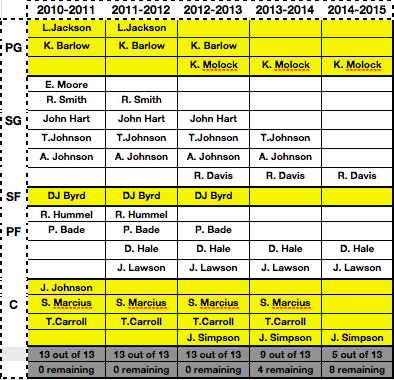 There have been a lot of questions asking how Robbie Hummel's red-shirt year will impact the scholarship picture. Unfortunately, his scholarship will be counted against the 2011-2012 season like any other player. As a result, he takes up the final 2011-2012 scholarship available. Scholarships for the 2012-13 season were already closed out prior to Hummel's injury.

Barring any unexpected attrition, the overall scholarship situation is pretty black and white. We have no scholarships to give until the Class of 2013.

It might not stop Painter from handing them out, but in reality, there just won't be room.

Unfortunately, I wouldn't expect prep school to be a viable option for any of our current targets. Donnie Hale's situation was unique in that he really, really wanted to be a Boilermaker. You wont find too many top 100 recruits willing to commit on the condition that he may have to attend prep school for a year if a scholarship is not made available.

I asked this hypothetical question on Twitter (shameless plug: @PurdueBBall), and I want to ask it here as well:

Even if there is a player you wouldn't mind putting on the chopping block, it's still a moot point. Matt Painter would never take away an already existing scholarship to make room for a recruit. Painter treats his players with nothing but dignity and respect and the act of not renewing a scholarship would badly tarnish the trust he's build with his players and their families. It would also send a bad message out to future recruits considering to play for coach Painter. Knowing everything I know about the Painter and how he conducts his program, I am pretty damn confident it's not even an option.

He just wouldn't stoop that low.

So the real question is: Does Matt Painter know something we don't?

I doubt it, but it might be a fun rumor to start...