I'm in Miami as you're reading this, so I didn't get a chance to add many links. I'll try to find a few and drop them in at the end as clippings.

Well, there is some good news. We're currently in sixth place all by ourselves in the Big Ten. With a win Saturday night we can even be a half game out of first place. Although it is unlikely, we still have just as good of a chance to go to Pasadena as Ohio State and Michigan. Sure, we'll need something crazy to happen like Terrelle Pryor (and half the conference) getting stricken with polio, but you just never know what will happen.

We're also in the marquee game this week, taking place at 7:30 on Big Ten Network. It is probably our only chance to play in a night game this year, as we're the king s of the noon kickoff. Even the road game at Ohio State is a noon kickoff for crying out loud. Speaking of noon games, all three noon kickoffs feature heavy favorites this week.

I know I am crazy, but I think the Hoosiers have a chance here. Ben Chappell, Tandon Doss, and Demarlo Belcher are on fire of late. Their offense can score on anyone, even Ohio State. The Buckeyes didn't fill me with confidence last week either. They got hyper-conservative once again when Pryor got hurt, and all Indiana needs to do is force him to throw on the run to mess things up. Sure, it remains to be seen if the Hoosiers actually have a defense, but all they need is a modicum of defensive effort to become a very dangerous team.

Eleven Warriors is on the ball this week talking about the sky falling in Columbus. I really wish Purdue had an 11 point win to bitch about. They have also lost Tyler Moeller for the season. That's not the type of injury you want with a great passing game coming to town. I think Ohio State wins, but Indiana makes this a lot closer than anyone expects. Ohio State 38, Indiana 28

The Fighting Illini are Penn State's guests for homecoming, but the Nittany Lions have underperformed to this point. Nathan Scheelhaase hasn't exactly lit teams up through the air, but he is a threat with his legs along with Mikel Leshoure. Penn State absolutely should win, but Illinois is playing with a lot more confidence than they did at any point last year. Derek Dimke is the best offensive threat, being 6 of 7 on field goals.

Robert Bolden has been the better freshman starting quarterback. He's fine when it comes to yardage, but he only has three touchdowns against six interceptions. That means the Nittany Lions must avoid turnovers. Even Evan Royster hasn't blown up yet. This will probably be a low scoring game because neither offense can do much. Penn State 24, Illinois 10

Tehre is one corner that does not want to see Tim Brewster get fired, and that the blogging community. Specifically, our most hated enemy in Black Heart Gold Pants. They love Brewster because he is completely detached from reality. Adam Jacobi's latest gem about Brewster even made it to CBS because Brewster stated that Minnesota could easily be 5-0 right now.

Yes, a team that couldn't defend against a 1-AA team and has looked completely lost for most of the season could be 5-0. I watched the end of their game last week. I have never seen a four play sequence as bad as the one leading up to the clinching interception by Adam Weber. Even then, he was facing fourth and long, but threw a pass five yards short of the yard marker.

Paul Bunyan's Axe is on the line, a trophy that is the most dangerous when being paraded around on a crowded football field. The way Minnesota's season has gone, they'll ask to borrow it from Wisconsin after it is one in order to end the Brewster era in style. Expect the angry Badgers (after last week's loss) to roll at home against a really bad Golden Gopher squad. Wisconsin 31, Minnesota 14

I still think Michigan's moniker of "Little Brother" is one of the most derisive in all of college sports. That said, the Spartans have gone more than 1,000 since their last loss in football and basketball to the Wolverines. It is rare that they have a two game win streak, and now they have to show that they have an actual defense. An actual defense is something Michigan has yet to face. What happens when Greg Jones levels Denard Robinson?

This game is bigger for Michigan State because a victory likely has them dreaming of Pasadena. Remember, they don't face Ohio State this year. Wisconsin is already notched as a victory, so it almost becomes a three game season for MSU after this one with Northwestern, Iowa, and Penn State left. I think I'll give MSU the edge because they have a defense. Michigan doesn't. If they can prevent Michigan from scoring quickly like they did against Indiana it will give the Spartans an edge. These two usually play some entertaining games, so this will be fun to watch. Michigan State 35, Michigan 32 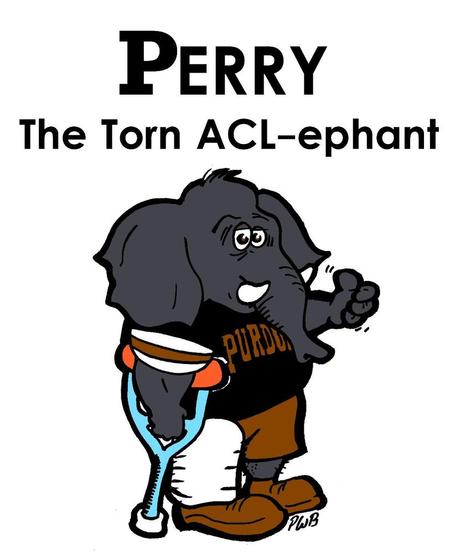 Our new mascot? (Thanks to reader Patrick Bobillo)

I want to feel good about this game, I really do. I want to think that rob Henry will get the offense moving and that the defense will finally start defending screen passes or dumps over the middle to slot receivers and tight ends. I am a realist though. Dan Persa is incredibly accurate and can run, something we have never defended well in a quarterback. Yes, it took six turnovers for the Wildcats to beat us last year, but I don't think it will take anything as dramatic as that.

The only way Purdue wins is if Henry can complete a few passes and we keep moving the ball on the ground. We need to have long drives that result in points and take time off the clock. Our best defense is to keep the ball from them as long as possible. Unfortunately, I don't see it. Too many of our few defensive stops have come via dropped passes. With Persa completing nearly 80% of his passes it is clear we can't rely on that. Northwestern 31, Purdue 17