I'm headed out of town today. Mrs. T-Mill wanted to go to a Miami game, so we're taking a long weekend down to the MIA to see the Hurricanes take on the Seminoles. In addition to some scehduled posts over the next few days, you guys will be in charge of the asylum during the OpenThread Saturday night. I'll be following along via phone, but the Boilers will have to get it done without me watching.

Before taking off, however, we have a guest post. Regular reader Brad Warbiany wanted to do a themed power rankings based on: Thomas the Tank Engine. I know this isn't the usual aura of manliness we try to project, but we're getting back to basics here. It's about time we had a trained themed power rankings, and it proves to the Iowa conspiracy theorists that we have communist plans even for the youth of the conference. After all, if they learn our ways they'll never know the difference, will they?

When TMill asked on Twitter for potential Power Poll themes, I suggested a befitting theme would be the very boilers that our beloved Boilermakers build - the steam engines of Thomas & Friends.  Unfortunately, Mr TMill is not well-versed in the world of the Island of Sodor.  He has a busy week, and as I have 3 year old and 1 year old boys at home, I offered to lend my extensive expertise to the matter.  Here's to hoping I can be a Really Useful Blogger! 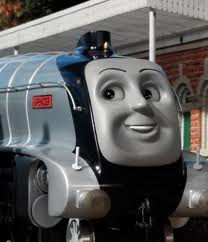 Spencer is big, he's brash, and he's as silver as a Buckeye helmet.  He's boastful and insulting, always putting other engines down for their shortcomings (invariably, the shortcoming is not being Spencer).  He's not well liked by the other engines due to his arrogance, but like the Buckeyes, he is respected for his strength.  For all the trash he talks, he has the tools to back it up - just like the Buckeyes.  Spencer is disliked enough as an engine that if the Buckeyes were to face Boise State in the national championship game, the Bucks would probably be disliked enough to root for the underdog Broncos rather than our brethren from the Big Ten. 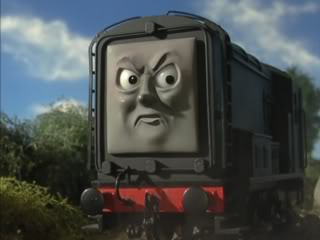 Of course, I can't let a Power Poll go by without disparaging our Most Hated RivalTM.  And to do so, I must level the most damaging insult that exists in the world of Thomas the Train - Iowa is not even a steam engine at all - Iowa is Diesel!  Big, black, and stinky, Diesel is mean-spirited and spent many years away from the Island, much like Iowa's 20-game losing string to the Good Guys.  In later episodes, Diesel has seemed to finally be accepted by the steam engines, but I, for one, am holding on to the Hate. 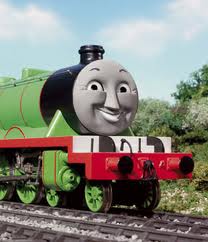 Henry, like Michigan State, is an old engine with a rich history on the island.  He's been around the island since the beginning, yet is quite often overlooked when compared to the other engines.  Like Michigan State, he is quite often a Really Useful Engine, but Henry has had bouts with reliability issues during his service.  He has shown depression, "illness", and mechanical breakdown - much like the teams coached by John L. Smith.  His main design flaw was fixed, though, and much like Mark Dantonio's team, he's beginning to return to his proper form.  Sadly, he still seems to be overlooked from time to time, but engines that overlook him do so at their peril, because he's at his biggest and strongest in years. 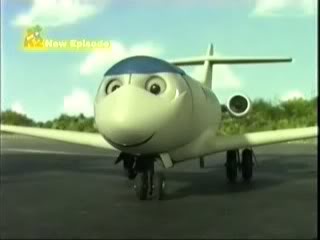 Why Jeremy?  Because much as Jeremy is a high-flying jet unlike any of the engines of Sodor, the Denard Robinson-led Michigan Wolverines are high-flying unlike any team in the Big Ten.  Jeremy can go faster and farther than just about anyone else, but as you can plainly see, he's a commercial aircraft - no defensive armaments to be found.  Much like this year's Michigan Wolverines, the only way to victory is through speed - outscore your opponents in fast, energetic shootouts. 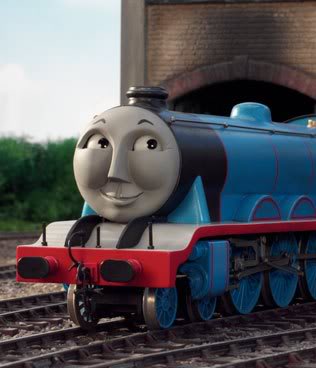 Gordon has a very important job on the Island of Sodor - pulling the Express passenger train.  It requires strength and speed, building up a big head of steam and barreling down the track imperiling anyone or anything in its way.  Look at the photo - doesn't it remind you of Ron Dayne, P.J. Hill, or John Clay coming your way?  Gathering up a head of steam and barreling down on your opponents is a perfect description of the Wisconsin ground attack.

Toby the Steam Tram, like Jeremy the Jet Plane, is included here largely because Northwestern is a bit of an ill fit in the Big Ten.  I know that they are one of the original members, but being a small, private university always makes them a bit of an outlier, much like Toby.  Toby isn't the biggest or strongest engine, but he does his job reliably and is clearly a Really Useful Engine.  Every once in a while, he can truly step up to the task, such as the episode where he helped push Gordon and the Express up a large hill, while Gordon didn't think Toby had the strength to do it.  Northwestern is like that - quiet, unassuming, but occasionally shows you strength where you didn't see it coming.  Also, much like all the engines are friends with Toby, everyone likes Northwestern.  He rarely gives you a reason not to.  One can only hope that this Saturday, Toby plays the part of the small, weak engine rather than the overachiever that Northwestern can often be. 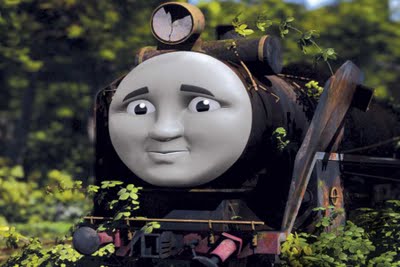 In the film Hero of the Rails, we are introduced to a long-forgotten train named Hiro.  Apparently from the Far East (Japan), Hiro was known as Master of the Railway both on his home island and when he first appeared on Sodor.  This is much like Penn State far to our east, who came to the conference with a rich history and won the Big Ten in their second year, finishing in the top 3 their first 5 years.  Sadly, Hiro began to break down and was forgotten, abandoned in the woods of the island as parts broke and were hard to replace, such as Zack Mills in the atrocious 3-9 season of 2003.  Later, he was found by Thomas who rehabilitated him and restored him to his former self for the 2005 and 2008 seasons.  But much like the Hiro of the movie, they broke down again, to the level of replacing their motor (starting QB) with a completely untested prototype, true freshman Robert Bolden.  Perhaps, though, this new configuration will lead Hiro to become Master of the Railway again. 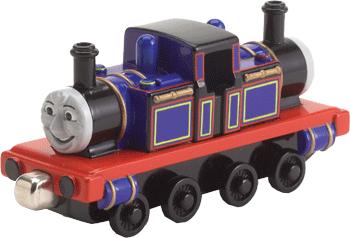 In the mountains of Sodor lies the narrow-gauge railway.  These small engines are smaller and weaker than the engines of the main railway, riding on narrower track than those below.  However (much like MAC schools), they can be Really Useful in their own way as Purdue and Minnesota have found this year.  Indiana's recruiting over the last several years has made them very similar to the engines of the narrow gauge railway, but perhaps still stronger - which brings us to Mighty Mac.  Mighty Mac is a graft of two narrow-gauge engines, resulting in the strongest engine of the entire narrow-gauge bunch.  However, the engines have a bit of conflicting personalities, and being grafted to face opposite directions, one thinks that they can move as quickly forward as they do backward.  This appears to be the case also with Indiana's offense and their defense. 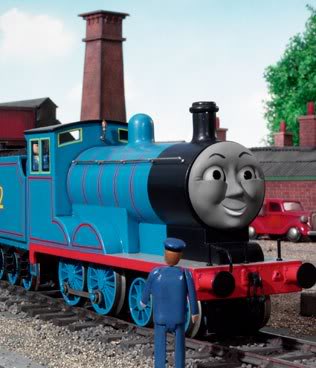 Edward is one of the oldest engines, and one of the most stable and reliable.  With a long history of wisdom and congeniality, Edward is well-liked by all of the engines, although he can be chided by the "big engines" for being a bit slow.  In the later seasons of the show, though, Edward became a bit more flaky and his judgment suffered, much as happened to Illinois since Ron Zook was hired.  This is still a team that has potential, but as long as Ron Zook is at the helm, they're never going to be known for the "wisdom" that fits their reputation. 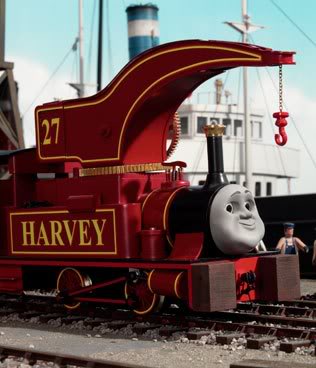 Being a Boilermaker, it would be easy to assign the star of the show, Thomas the Tank Engine, to our boys from West Lafayette.  Unfortunately for the team (but luckily for this posting), current events have given me an easy out to avoid such vanity.  Why are the Boilermakers best represented by Harvey the Repair Crane?  Because let's face it, some repairs are exactly what we need.  I hope he has experience with ACLs. 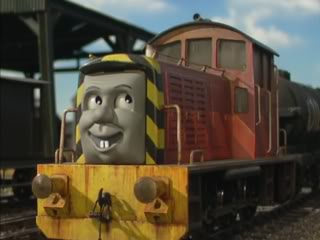 Salty, like Minnesota, has a rich history.  While Minnesota fans can regale you with tales of national championship stories before they were born, Salty will bore you to tears with stories of the sea.  Today, though, they are both more likely to be the butt of jokes than the object of praise.  And while Minnesota fans may quibble on this point, it's highly unlikely that either will return to their former prominence. 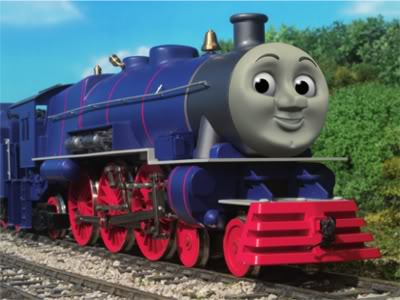 Hank is a newcomer to the series, and while much of the Thomas universe is British, he's known as the All-American Steam Engine.  He's big, powerful, and with a rich tradition of heartland excellence, much like Nebraska.  He's the new kid on the block, but carries a swagger of confidence matched with good old-fashioned Midwestern courtesy.  One can only expect that as he becomes a permanent fixture on the Island of Sodor, he's going to carry a very big impact with him.