Meet Your Boilermakers, Part 1 - The Guards

Share All sharing options for: Meet Your Boilermakers, Part 1 - The Guards 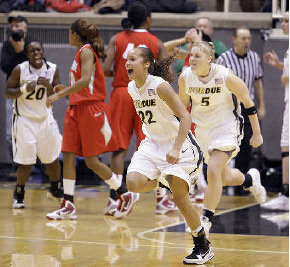 After the horror of that football game, I thought we all needed a pick-me-up, and where better to start than Purdue's outstanding guards for 2010-11?  Led by the young but experienced duo of Brittany Rayburn and KK Houser, the talent level in this group is extraordinarily high.

Brittany was the star of the team last year, and for good reason.  A pure scorer in the mold of E'twaun, she was the #1 go-to player.  Known for fiercely attacking the rim, she can also rip off a string of 3s if she gets going.  A constant threat to go off for 25 or 30, she is the one player every one of Purdue's opponents will be trying to stop.  Also like E'twaun, people see the points and not the defense sometimes.  Brittany is one of the toughest players on the court and has no hesitation about stepping up to draw a charge or dig out a tough rebound.

Last year KK began the year as a mistake-prone freshman running the point behind FahKara Malone.  She ended the year as a genuine leader in her own right, and this year she will be expected to step up and run the show, in addition to tutoring an understudy of her own in Courtney Moses.  Everything that I've heard to this point indicates that she is embracing the role, and that she and Sam Ostarello have seized the leadership mantle vacated by FahKara.  On the court, she is a exceptionally fast, and has excellent floor vision on the break.  Another player who is not afraid to attack the rim, she is also a solid free-throw shooter in the clutch.  Along with Brittany, KK will be one of the players we need to have a good season to have any hope of going anywhere.

Chantel missed the entire 2009 season due to an AC...I mean Achilles injury.  As a freshman, she averaged 8.4 minutes per game.  Coach Versyp has called her the most athletic player ever to play at Purdue, citing her ability to get up near the rim even at 5-10.  Her injury was one of the ones that seriously hurt the team last year, as it removed almost all depth at the guard postions.  Assuming she is fully recovered, and all signs show she is, she should be a solid player.

Antionette Howard is one of two transfers who becomes eligible this year for the Boilers.  She comes to us from Florida State.  Rated quite highly coming out of HS, she was Georgia's class 5A player of the year in 2007. In a sense, this was almost a delayed recruiting success, as Howard had Purdue in her final two before choosing FSU.  More of a wing player than a pure shooting guard, she will likely see time at the 3 in 3-guard lineups.

The second PG on Purdue's roster this year, Moses should fill the role KK vacated.  She was the definition of a star in high school, holding school records in points, assists, and steals.  Anyone familiar with Oak Hill knows that is no small feat, even at a Class 2A school.  She also led them to a 97-9 record in her 4 years.  Her senior year, however, is what made it clear that she was head & shoulders above the competition.  She scored an absurd 31.7(!) points per game her senior year on her way to the 2010 Indiana Miss Basketball.  Explosive and fast, with a solid outside shot, she has the potential to become  truly special player.

If Courtney was the small-school star, Dee Dee was the big-city player.  A key part of the 2008 Ben Davis team that went 30-0 and won a national title, Ben Davis had a sparkling 72-7 three-year record over her time there.  The only reason she missed out on Miss Basketball was Courtney (31.7!), instead finishing second in the balloting.  Coach Versyp praises her as a versatile slasher who creates mismatches with her size.  She should see time at both the 2 and 3 this year, depending on the lineup and opposition.

As you can see, our backcourt should be a strength this year, especially our second unit.  After only having 4 true guards in the rotation last year, one of which had bad knees, the depth here should allow us to control the game even when the starters are on the bench, something we sometimes struggled  with last year, as we either had to move players out of position or play our starters 35 minutes a game.

Tune in next time for...the frontcourt.