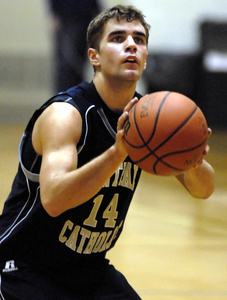 In most top-ten programs, there's an equal chance for the walk-ons to see meaningful minutes in a game as the mascots.

Fortunately for sophomore Dru Anthrop, Matt Painter justly holds his walk-ons in the same light as the scholarship players. If a walk-on can help the team win, he'll play. Simple as that.

Anthrop has joined the growing fraternity of local basketball "stars" paying their way and helping out the boilermakers. Former walk-ons Bobby "Buckets" Ridell and Mark Wolford can attest that devotion and sacrifice to Painter's team will be rewarded.

Considering Purdue's recent injury woes, Anthrop should expect to start at some point in his career.

2010-11 Projection: Bench (outside of regular rotation)

As a freshman, Anthrop boasted a team best 100% field goal and free throw percentage. I didn't look this up, but he might have played the most efficient 15 minutes of anyone in college basketball.

In all seriousness, it's difficult to write a bio on a player that's played 15 minutes and only shot the ball once. But if his high school career with Lafayette Central Catholic is any indication of his potential, he might surprise some Purdue fans sometime down the road.

Anthrop averaged 23 points, 7 rebounds, 4 assists, and 3 steals during his senior year. He finished his high school career with 1,298-career points. He was also recognized as the Lafayette Journal & Courier Small School Player of the Year his junior and senior year and honorable mention for nearly every all-state award out there.

Here are some highlights of Anthrop's high school exploits:


If we've learned anything lately, it's that everyone needs to be ready to play at any time. If you told me that John Hart would play more than 5 minutes in a game last season, I would have called you crazy.  The guard position was the deepest position heading into last season. Thankfully, Matt Painter has proved that if you're is not getting it done in the game, he'll find someone who will.

Although it's unlikely Anthrop is part of the rotation, there will be a lot of (relative) inexperience at the guard position this season. If Smith, Hart, TJ or AJ fail to execute in the game, there's no question in my mind that Painter would look in Dru Anthrop's direction in an attempt to find something that works.

I mean no disrespect by this, but I really hope Painter doesn't have to look in Anthrop's direction.