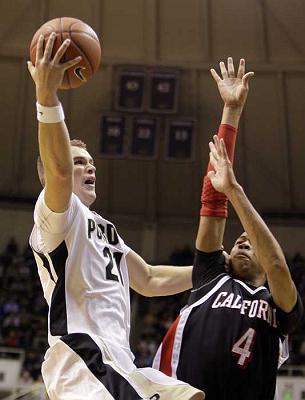 Prior to DJ Byrd's arrival on campus, he was commonly dubbed the next Chris Kramer, but with a much more developed offensive game. These are some pretty lofty expectations for anyone's standards....  The Rivals 4-star recruit averaged over 20 points a game in his final three seasons in high school and ended his high school career as North Montgomery's all time leading scorer. His game has the blue collar toughness that  Purdue has built its program around.

Playing guard throughout his entire high school career, Byrd was called upon to play wing since his size and strength were needed due to Purdue's thin front court.

In retrospect,  unrealistic expectations and the position switch basically set Byrd up for a difficult season. He had to learn a brand new role in addition to the incomprehensible difficulties of adjusting to Matt Painter's brand of basketball.

However, this is now water under the bridge now. Byrd has a season worth of experience under his belt, he understands the offense and defense, and he's ready to showcase the offensive arsenal that many are unaware he even has.

DJ Byrd, in my opinion, has the talent and mindset to be a very special player for Purdue. Although the comparison seems insane now, I like to project him as a more physical version of former MSU guard Drew Neitzel. That might seem a little ambitious now, but once Byrd finds his shot, watch out! There's no question he has the talent to succeed at the collegiate level:

Byrd can easily become answer to offense that we have been searching for in the wake of RH's injury. Much like Ryne Smith, it's a matter of him getting comfortable enough with his role so that it comes naturally and he don't have to think about it too much. Easy enough, right?
it goes without saying that If Byrd wants to compete to be a 6th man (or even starter), it's imperative that he improves upon last year's performance. Obviously, he'll need to significantly improve his FG and 3PM % (30.7 and 27.1% respectively). Furthermore, his 0.8 rebounds a game will need to vastly improve. Looking back at the game logs last season, he was virtually non existent on the boards. He recorded  3 or more rebounds only 3 games last season. There are no excuses for Lewis Jackson to be averaging 2 more rebounds. If Byrd has any hopes to take Hummel's minutes, these two areas must be addressed

Luckily,  I'm a nice guy and I will chalk his freshman year as an adjusting period. Now that the culture shock of his rookie year has passed,  Byrd should be entering this season with new found confidence. He knows what he has to do, and he knows that he can do it.