Editor's Note: Sorry this post is a little late. I had to push it out a a little faster than usual due to conflicts. I apologize in advance if the quality is not to your standards.

Now back to your regularly scheduled player profile... 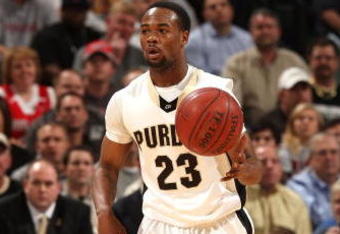 Calling Lewis Jackson's sophomore season forgettable is a bit of an understatement. Jackson missed the first 19 games with a bum foot (and 5 game suspension ) and played the remaining season at about 70% with a broken screw in his foot. Purdue fans haven't seen a healthy Lewis Jackson since the March '09 loss to UConn.

Thankfully, Lewjack enjoyed a quiet off-season and is entering his junior year 100% healthy. He's but a cliff note in most pundits' projections of this year's team, but as leader of such a potent offense, he'll be the true keystone to a successful season.

All you have to do is watch a minute of Lewis Jackson's high school highlights to see why Matt Painter has given him a chance to lead his team:

Jackson might be diminutive in size, but his quickness, athleticism and aggressive nature quickly makes up for any of his size deficiencies.

As a freshman, Jackson's performance awarded him a Big Ten All-Freshman Team honor. People don't realize how difficult it is to play the point guard as a freshman, let alone starting 30 out of 36 games out of necessity. He basically had to learn the offense on job. Despite his youth, Jackson played over 23 minutes a game and led the team in assists ,118, which is second most of any Purdue freshman. He averaged a respectable 5.9 points, 2.5 rebounds and 3.3 assists per game.

Beyond the box score, Jackson played tougher than anybody on the court not named Chris Kramer. He plays like a pit-bull in a pug's body. Deceivingly strong, he never back down to anyone defensively.

Unfortunately, his sophomore year was a bit of a bust for reason beyond his control. Many wish he would have red shirted, however, Purdue could not count on riding into the playoffs on the back of Kelsey Barlow. Lewjack's 8 point, 6 rebound 9 assist performance against Siena was a glimpse of the types of lines he's capable of...and that was with a bum foot.

Unfortunately, his poor shooting percentage hurt the offense. Defenses didn't have to play him too close and could help out on other players.

A healthy Lewjack brings a quickness and headiness to the offense that it lacked for the better part of last season.But an improved jump-shot would take him from good to great. If he was a scoring threat, defenses would not have to sag, thus creating opportunities for others, or himself with his quickness.

If Lewjack combines the experience he's gained with the athleticism he showed his freshman year,  he might be hell of a playmaker! We'll know soon enough...