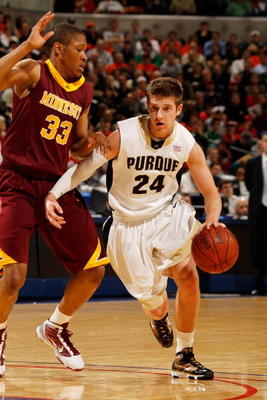 The iron has never been hotter for Ryne Smith to step up make a huge splash in the Purdue offense. At this point in the preseason, the void left in the back court by graduating Chris Kramer and Keaton Grant gives Ryne Smith the perfect opportunity to step up and become a big contributor. Add in the points we've lost by RH's ACL and it's crucial that someone steps up on a consistent basis and helps plug the gaping offensive gap.

Can Smith be that man?

Ryne Smith has the ideal opportunity to carve a notch into Purdue Basketball lore. Yes, that sounds absolutely insane considering his contributions up until this point, but he if he finds his shot he'll be dubbed this season's hero.

In full disclosure, this is not the first time Smith has had the opportunity to make his mark on the team. As a freshman, Painter could not afford to play as he was a defensive liability. Smith took that to heart and used the off-season to turn things around. After gaining 20 lbs and being a solid contributor for the Global Sports Academy Team USA All-Star team, Smith entered the 09-10 season with a head of steam. Painter publicly stated on on several occasions that Smith was/is the best shooter on the team in practice. Many, including myself, predicted Smith was on the verge of a breakout season.

Unfortunately, Smith had one simple problem: his shot wouldn't fall in the games. This is actually a much bigger problem when your primary objective is to be a scoring threat. Despite more than doubling his minutes, he still only shot 32.5% from the floor and 29.7% behind the arch. He averaged only 2 points in over 12 minutes a game. He did, however, show that he can be a viable defender. Unfortunately, he did little to help offensively, which is an area that the team was desperately searching for a spark. After John Hart flew in off the bench like superman against Illinois, Smith's saw his minutes all but vanish.

The good news is, his setbacks are just cerebral. That talent is there. He can defend to Matt Painter's standards and he can sure as hell shoot the ball. Painter's practices are anything but relaxed and easy, so he is clearly practicing against better talent than he sees in games. He just needs to get to...well...shoot better in games. (I know, I'm insightful)

But Smith's spot in the rotation will not come without healthy competition. John Hart, Terone Johnson, and Anthony Johnson will also be battling for the departed seniors' minutes. While he should have the advantage of knowing the system the best, everybody is on a level playing field with Matt Painter.

And once Smith does start knocking down the trey like he's capable of doing, watch out! He has the talent, he has the experience, and he could be the X factor that helps us forget about October 16th and turns our attention to the best hotel rates in Houston.