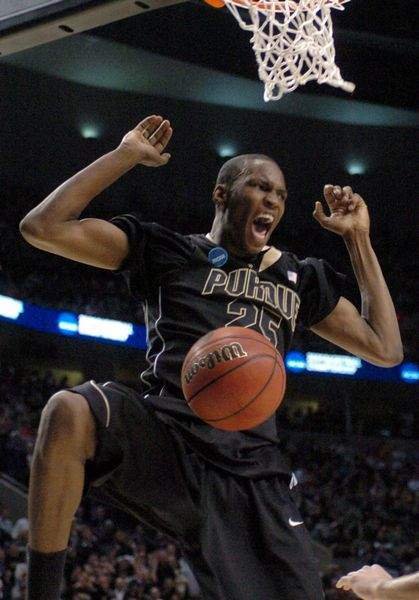 Considering the last week's events, JaJuan Johnson's decision to stick around is slightly more meaningful to the team, huh?

After testing the waters following his junior season, JJ has spent his off-season developing the "weaker" aspects of his game that were identified by NBA scouts, as well as competing against some of the top players in the nation on NBA Select team. He also finally figured out that magical formula to gain weight (he should have asked me) and has brought his weight respectable 225 lbs. and his bench to a remarkable 325 lbs.

The work he has put in the off season is more than evident and will prove crucial as he'll be called to shoulder much of the void left behind the wake of RHACL2.0 (trademark pending). The soft-spoken center will be heading into this season with a new look, a chip on the shoulder and a hunger to end his final act on a high note.

The path that JJ has taken to get to to where he is now now speaks volumes about his work ethic and character.

As a freshman, the rail-thin ball freshman was pushed around by nearly all the bigs in the Big Ten. That year, he never scored more than 7 points or grabbed more than 6 rebounds in a conference game. He did, however, show flashes of the potential that attracted Matt Painter to JJ before any other major college. The growing pains he endured during his freshman season might have been frustrating, but they were the catalyst that sparked JJ's transformation into what he has become today. JJ took up the challenge, put in the off-season work, and has became one of the most prominant big men to ever put on a Old Gold and Black jersey.

A quick glance at his season averages shows the type of work he's put in between each season:

After enjoying a nearly dominant 2009-2010 season, Johnson continued to work on areas of his game that needed some improvements to succeed at the next level.

This year should be a special year for the senior. He's already got the moves and the confidence. Add in the improved strength, added weight, and the benefits from the stiff competition he endured over the summer and it's safe to speculate that he'll be an absolute monster this year. Along with his own personal development, RH's absence will require JJ to carry more of the offensive load and need to do the same on the boards.

There's no doubt that Johnson will be playing in the national spotlight this year. He's on the first or second team in nearly every All-American list out there. Hubert Davis called him the 'best player in the nation' during the ESPNU midnight Madness special. That's a lot of pressure, but there is nothing that can distract him from his only true goal: A National Championship.

The biggest difference from last year's team, besides the obvious, is the added help of Sandi Marcius and Travis Carroll down low. Coupled with a more physically developed Patrick Bade, and the front court should have a completely new look. If Marcius or Carroll prove to be capable at the 5 spot in any capacity, Painter will have some opportunities to get creative with the lineups. He could play JJ at the 4, which would give Purdue a much bigger look of the circumstance calls for it. It's been reported that he's added the three to his arsenal over the summer which has left me with with mixed feelings. Obviously JJ at the 4 might pose some problems on the defensive end against quicker 4's, but it may also cause mismatches on the offensive end in Purdue's favor. If Bade has made the improvements the team has been raving about, foul trouble would not be as detrimental as it was last season...err...forget that...

Only time will tell how Johnson will close his final chapter in a Purdue uniform. Judging by the preparation he's put in up until now, it might be a thriller!