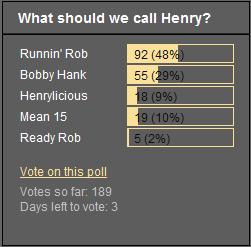 Grounded: Boilers pass on air attack | The Journal Gazette | Fort Wayne, IN
So we know we need a little more passing attack, but Runnin' Rob has some work to do to achieve that.  Also, if you haven't voted on what we should call Rob Henry over at BoiledSports, you have 3 days left.

Henry getting armed for battle | jconline.com | Journal and Courier
During his two-year stint as Trinity Catholic's starting quarterback, Henry threw for 3,700 yards, including 2,600 as a senior at the Ocala, Fla., school.  Those numbers give me hope.

Football Game Notes - Vs. Minnesota
Bob Griese will be back on campus. Plus, other little facts you'll want to know for the game.

Previewing the Matchup Against the Minnesota Golden Gophers | Bleacher Report
Last weekend in Evanston, Illinois, on a balmy night, the Purdue Boilermakers solidified themselves as one of the most bi-polar teams in the country...

Boilers tied for 4th in nation with 17 sacks | The Journal Gazette | Fort Wayne, IN
Watch out Mr. Weber... Kerrigan and Short are coming for you

Northwestern recap | Boilers Insider | The Indianapolis Star
Some good points to look at from the NW game.

Midseason review: Purdue - Big Ten Blog - ESPN
Purdue Boilermakers Record: 3-2 (1-0 Big Ten) No team in America has been hit with more adversity from an injury standpoint than Purdue. And arguabl

Prospecting Purdue | The Journal Gazette | Fort Wayne, IN
*NEWS FLASH* if you haven't heard, we are supposed to be good