Share All sharing options for: Stating our case for a number 1 seed: Purdue dumps West Virginia

You can no longer ignore us.

That is what Purdue collectively said today. People doubted we could play against a solid Big East team. People said we couldn't compete against "elite" NBA talent. In a recent poll on ESPN we had a plurality of votes, making us the nation's choice to be the first of the remaining six unbeaten teams to lose. Nevermind we were playing one of those unbeatens at home. We were Purdue. We were from the Big Ten. We sucked.

This was not just a validating victory. This was not a resume builder for March. This was a thorough beatdown and emphatic win that showed just how much this team has matured in 12 months. In a similar atmosphere last season Duke came in and humbled us on our own floor. They never let the crowd get into it. Today, however, Purdue showed that are a deeper, more talented, more mature, and more dangerous team. I have no doubt now that Purdue will not lose at home unless they beat themselves or someone plays out of their minds. Just chalk up nine Big Ten home wins right now.

As a fan, the atmosphere was absolutely perfect. There were several moments where the crowd spontaneously stood and cheered as Purdue brought the ball up the floor. This entire game was deserving of a standing ovation. Make no mistake: The Mountaineers are a very good team. They did not have an answer for the Boilermakers today. 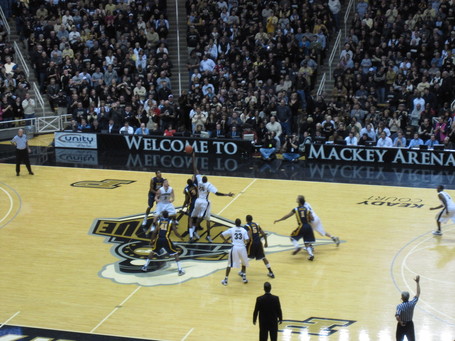 Positives from the West Virginia game:

JaJuan Johnson - West Virginia had absolutely no answer for the big man today. None. JJ did what he wanted, when he wanted to. Everyone looked to get him the ball. They could not deny him the ball, and once he had it either a dunk or free throws followed. Imagine if how well he would have played if he was an elite, NBA-level talent. JJ had perfect position on the offensive glass for some key second chance points too. He wanted the ball in every big moment and knew as the game went on that West Virginia could not stop him. Best of all, he played 37 minutes with only one foul. Oh, I should also mention he DUNKED SO HARD HE BROKE THE FREAKING RIM once.

E'Twaun Moore - E'Twaun wanted to take the game over at the start of the second half and did just that. His rebound jam of a missed free throw was not only one of the most amazing plays I have ever seen in person, it ripped out West Virginia's soul. The Mountaineers had not matched our toughness to that point. After that dunk, they wilted and Purdue pushed the lead from 10 to 20 over the next four minutes.

Robbie Hummel - E'Twaun struggled shooting the ball, but still had a great game. Robbie hit numerous shots with a hand in his face that further demoralized West Virginia. Best of all, he shook off first half foul trouble and closed the game better than Mariano Rivera.

Ryne Smith - Smith was instrumental in the big run at the start of the second half. He hit a big three, had a layup on a backdoor cut, and hit two free throws all in the first five minutes of the half. As I told the guy next to me, any time Ryne Smith gives us seven points it is a good game.

Keaton Grant - Keaton was today's sub of the game. All eight of his points came in crucial moments where he attacked the basket. He also had a big steal and one of our many dunks. As a sidebar, that is a great sign of how well we were playing. We had so many dunks I lost count.

Toughness - Watch this game again. There is absolutely know question that Purdue was the tougher team and West Virginia was soft. They never adjusted their defense or applied more pressure until the game was out of hand and we were up 25. Bob Huggins had no idea what to do and neither did his team. Here is an excellent example of how soft West Virginia was. In the first half Barlow had a steal and breakaway. Da'Sean Butler, one of their stars and an alleged elite NBA talent, quit on the play. He flat out quit when he could have chased and at least tried to block the shot from behind. This is why I cannot respect Huggins because he never had his players prepared to face any adversity today. I knew the game was ours from that moment. If West Virginia wants to be the elite team people say they are they must learn not to back down when challenged. They tried to challenge us, we handled it easily, and turned it back on them. Once they showed they couldn't handle the pressure it was blood in the water.

The Crowd - Paint Crew members, you deserve a standing ovation for returning to campus today. Alumni, you were loud and made Mackey incredibly intimidating. This place was packed today. I am talking "they sold an extra ticket in each row and gave everyone one cheek of space" packed. It was an incredible atmosphere, matched only by last year's Michigan State game. Everyone deserves a round of applause today.

Team defense - Once again, this falls under toughness. It becomes very easy to win when you hold a team 15 points below their season average. Ebanks had been one of the hottest players in the country but did virtually nothing until late. West Virginia shot worse than 40% for most of the game. The only bad thing was that they were 9 of 12 from 3-point range. Of course, Huggins never realized that and adjusted to shoot some more threes. Instead, he continued to bang his head by trying to drive on us.

Offensive flow - I just went back and counted our number of dunks in the ESPN box score. We had eight dunks for the game. We would have had nine if Kelsey Barlow had not botched one in the first half. That means our offensive flow (remember, we can't score) was working very well because we were getting such high percentage looks. That also gets the crowd up and into things as well. It opened things up for Robbie's perimeter shooting and even Ryne Smith to hit those big shots at the beginning of the second half.

Negatives from the West Virginia game:

Bob Huggins - I don't know if I have ever seen a more underprepared coach for a game. He whined. He begged. He did everything but adjust to the style of play for the game. That attitude carried over to his players too. By the second half he was reduced to throwing his hands up in the air because he couldn't do anything. Because of his attitude, it was fun to get that win today. 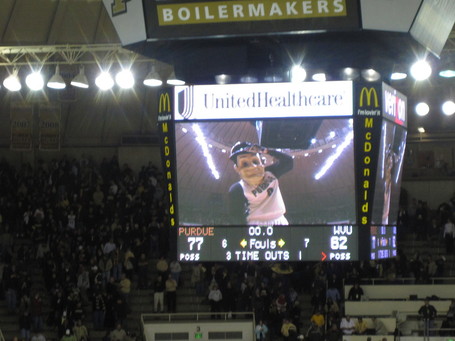 Pete had reason to dance with that final. Defend That, Digger!

Defend That, Digger! That, my friends, was a damn fine win today. We should now be in the driver's seat for a number one seed. We have four quality wins from non-conference play and two of them (Tennessee and West Virginia) are "elite wins". The Tennessee win is now in danger because of this wonderful news, but the West Virginia win has some serious heft to it because of what they have already done too. Also, for a team that cannot compete with "elite" talent we are the only program with wins over two top 10 teams.

As I mentioned after the Tennessee game, this win is like a 401k for March. We can now sit back and let it grow as West Virginia has hopefully a good season in Big East play. They are a very good team with a trio (Butler, Ebanks, and Jones) that is as good as any in the country. They will make some noise, but we proved to the nation we were the better team today.

That is the best part of the day. There was no doubt we were better. We dominated them in nearly every phase of the game. People expected a close game or even a West Virginia win. Instead, we led by as many as 25 and never led the lead get to single digits after bumping it to ten early in the second half. It is the type of win that even the most cynical of people cannot deny.

So now we jump back into Big Ten play. Tuesday we have a chance to tie the 1994 team for the best start in school history. More than that, we can now focus solely on Big Ten play knowing that it will garner us a much higher seed in March as long as we take care of business. We can only take care of what is in front of us and everything else will work itself out. In the words of Chris Kramer, "We don't retaliate. We just get W's."

Let's go get some more.