Share All sharing options for: Welcome to the Fold: Tracking Edition week 3

It is a Labor Day edition of this newest feature. We do have sad news on the other end of the spectrum, as cutdown day in the NFL was very hard on former Boilers. Some, like Charles Davis, Greg Orton, and Eugene Bright were longshots to make their respective rosters. Others were surprises. Stu Schweigert and John Standeford were both cut by the Lions. Kory Sheets was shockingly cut from the 49ers after having a fantastic preseason. Anthony Heygood suffered a similar fate as an undrafted free agent with Carolina. The most shocking of all was that Bernard Pollard was cut by the Chiefs. I'll keep an eye out for them, as many of these guys could land elsewhere as the season goes on.

In the mean time, here is what our current high school commits did last week, as a few more finally got their seasons underway.

Sean Robinson - QB - Rochester, IL (Rochester) - Rochester moved to 2-0 behind Robinson with a 57-35 victory over Rantoul. Statistics have not been fully posted for this game yet, but judging from the crude box score Robinson had five touchdown passes on the night. Three of these touchdown passes were 40 yards are more, so it sounds like a very good night for the young quarterback.

Joe Gilliam - LB - Southport, IN (Southport) - Southport began Conference Indiana play against a pretty good Pike team in Lucas Oil Stadium Saturday night. Unfortunately, the Cardinals already find themselves playing catch-up after winning the league undefeated last year. Pike won 33-7. The Indianapolis Star, in their crack coverage, covered two of the four games at Lucas Oil on Saturday, but provided nothing on Pike-Southport. Any in person reports on Gilliam's play would be greatly appreciated.

Jeremy Cornelius - WR - Harrisburg, PA (Bishop McDevitt) - The 4th ranked Crusaders began the season with an impressive 41-16 win over Harrisburg this past week. Cornelius did not find the end zone, but he had one catch for 15 yards.

De'Ron Flood - TE - O'Fallon, IL (O'Fallon) - O'Fallon got into the win column for the first time this year with a 38-7 win over Mt. Vernon. Flood had four catches for 44 yards and a touchdown, while also adding a two point conversion catch. His performance was the best receiving performance for his team.

Josh Davis - DT - Plain City, OH (Jonathan Alder) - Alder fell to 0-2 on the season with a 49-14 loss at home against Canal Winchester. Once again, stats were hard to come by, but we'll see if Jsoh's dad e-mails me againt his week, so stay tuned.

Mike Lee - LB - Pittsburgh, PA (Woodland Hills) - Woodland Hills began its season with a 13-0 loss to Steubenvill Friday night. I found no stats for Mr. Lee, but this was a defensive struggle for most of the game. I am sure he was prominently involved as a linebacker.

Ryan Isaac - DE - Michigan City, IN (Michigan City) - Michigan City moved to 3-0 for the first time since 2005 with a 31-21 win over Chesterton Friday night. While there have not been any stats posted for this game, Isaac has been impressive in his first two games. I also did find some photos of MC's very nice new home field. 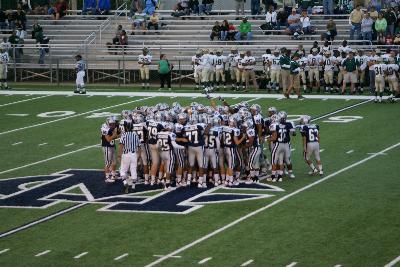 E.J. Johnson - DB - Cocoa, FL (Cocoa) - Cocoa has a very late start, not getting underway until September 11th with a home game against American Heritage. Cocoa carries a #1 ranking into the season in Florida's class 2A. That is to be expected though, as they are the defending state champion in that class.

Jess Schmitt - LS - Louisville, KY (Trinity) - After getting upset by Lawrence north in the opener, Trinity rebounded with a 27-0 win over DuPont Manual.