Truly a work in progress

Share All sharing options for: Truly a work in progress

Highlights can be found here, courtesy of Big Ten Network

Coming into today, no one really knew what to expect. Danny Hope was playing close to the chest with his offense while the Big Ten Network cameras were in town. The media generally assumed the offense would struggle with so many new parts. They also assumed our defense was awful as always. The first look, however, gave us some different impressions.

The offense looked good. Yes, it was only against Toledo, but remember: people thought we were going to struggle against Toledo. One comment I had was that it wasn't good that we gave up a sack to the worst pass rush in America last year on the second play of the game. Then Ralph Bolden broke a 78 yard TD run to completely erase it. To me, the only mistakes on offense were minor. They can be easily fixed. Interception one was on Royce Adams, as it went off his shoulder pad. Interceptions #2 and #3 were tipped just past the line of scrimmage. Since Holland's interception came two plays after one of them it erased it. We had dropped pass, but both Carlos and Edison, who had the most egregious drops, followed them up with touchdowns on their next passes. The running game was more than perfect.

The defense, however, is a concern. Honestly, I think they were just worn out from the no huddle, the heat, and 67 passing attempts from Opelt. Notice, Toledo got 17 points in the final 20 minutes. This was when Kawann Short, Mike Neal, and Nickaro Golding all had to head to the locker room for fluids. Our entire D-line was gassed and getting no rush, so Opelt had plenty of time.

I'll have more on that in a moment, but there are still more positives than negatives to take from this. 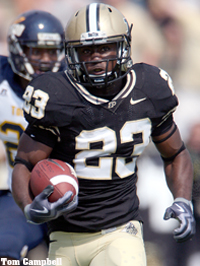 Positives from the Toledo game:

Ralph Bolden - I know it was only again Toledo, a team that was terrible against the run last year, but holy crap! The third best rushing game in school history and best since Mike Alstott's final game! 234 yards, 2 scores, and better than 11 yards per carry. He wasn't a one man show like Kory was last year (side note, Mr. Sheets was cut today). I think I can safely say we had fewer than ten games in the entire Tiller Era where we had more than 234 as a team. Oregon's defense impressed me on Thursday, keeping the Ducks in the game. If Bolden does half as well against the Ducks we're going to have an excellent chance of winning that game.

Carson Wiggs - Said to the people next to us after his 59-yard field goal, "I didn't even drive that far to get to the game." He already owned the school record by three yards. Now he has shattered it. He was solid on kickoffs, had a great tackle on a return, and 7 of 7 on extra points. We now know we can consider points any time we cross the 50 as well. That thing could have been good from 65.

Jaycen Taylor - JT added 81 yards and a pair of scores in his first game since the Motor City Bowl. One of the key things I noticed, however, is that the first person to congratulate him after his long TD run was Ralph Bolden. There is absolutely no ill will between the two, and that makes me very happy because both are more committed to the success of the team than their personal stats.

Keith Smith - He showed he can be the big target we need downfield. Elliott was much more willing to throw downfield than Painter was. Smith made them pay too by making several tough catches and being a general irritant to the Toledo secondary.

Joey Elliott - I felt his play was critical, as well as the receivers, because they made the passing game a factor. We don't need a Drew Brees, throwing 65 times per game for 450 yards. Our offensive line proved the running game can work. We just need a passing game that is good enough to keep defenses honest. I felt Elliott had just two major mistakes, those being his last two interceptions. Even then, they were tipped passes that went up in the air and Toledo ran under them. He looked downfield, completed passes two eight different receivers, and showed he can dump off to the tight end/running back as well as find his receivers. It wasn't a perfect game, but it was not the inept offense everyone expected. If you erase the two interceptions that were not followed by us getting the ball right back (Holland's INT) we have at least two more scoring drives. These are things that can be fixed, I think. Considering it was his first career start, I would consider it a success because our passing game didn't entirely disappear. It was much better than the one game I attended at the old Orange Bowl in Miami two years ago. In that game, Kirby Freeman completed one pass and threw three interceptions. By the end of the game, Miami didn't even bother to try passing. This effort was far from that.

Forcing turnovers - I could see Donn Landholm's emphasis on turnovers come through a bit. Both Torri Williams and David Pender broke on balls that should have been pick sixes. In fact, Pender's third quarter non-interception caused me to raise a question. If you can challenge a catch to see if it incomplete, why can't you challenge it the other way? That was key too, as it was an interception and it eventually led to a Toledo touchdown. Both of our actual interceptions were exactly like Toledo's. Holland's pick went off a receiver's hands and should have been caught by Morgan Williams, while Short's INT was a tip from Neal.

Offensive line - Someone had to pave the way for Taylor and Bolden. These guys did a fantastic job all day. Elliott only had true pressure on the game's second play as well. If they keep it up we will be much improved.

Negatives from the Toledo game:

Pass defense - This goes without saying. I was impressed with the run defense. Normally, we let even bad teams run wild. When Toledo did run, we stopped them. Unfortunately, they ran 22 times versus 68 passes. I wondered why we didn't double Williams, who had a field day, but Opelt was spreading the ball around well. He knew our weakness. We still cannot prevent wide receivers from roaming wide open over the middle of the field. There was some poor tackling too. Any time Opelt needed to make a throw someone was open over the middle. He knew our safeties had to come over to cover in the spread, and our linebackers were awful in pass coverage. I have no idea what the solution is, either. Toledo had good receivers, but they were open on seemingly every play. Honestly, I think the defense got tired. The line was exhausted and couldn't generate pressure in the second half at all. Opelt got rid of the ball quickly and the Toledo receivers ran great routes. Jeremiah Masoli had an awful night throwing the ball against Boise State, but we have to be much better against the pass in week two while facing a much better running team.

Conditioning - Seeing Neal, Short, Golding, and Gooden all leave the field because of cramps was very troubling. It was a much warmer day than expected, but the line simply couldn't stay on the field in the second half. Next week should be easier. It is a night kickoff in the cooler Pacific Northwest, but it was still a concern. We need these guys to be able to generate pressure by themselves. If they can do that, the linebackers can cover the middle of the field and fix some of the pass defense issues we had today.

The drops - I don't think this is as bad of an issue because we have struggled with it even the past two years when we have had more success in the passing game. Edison and Carlos both made up for their big drops with touchdown catches too. This is a minor tweak, and will get better with time. Royce Adams' drop led to a pick.

Aaron Valentin - I list this only because he was carrying the ball like a loaf of bread and looked like he was about to fumble about five times. Even though he didn't fumble, he needs to work on ball security.

I feel like I can breathe a lot easier for many reasons today. The offense did not struggle except for a few minor issues (like the botched play on the 4th down attempt). We were still able to score at will on a bad MAC defense. That is reassuring because people doubted if we could even do that.  I am also encouraged because Illinois and Minnesota, two teams I think we need to beat if we're going to go bowling, looked awfully bad today. In my mind, we're several steps closer to those allegedly in front of us in the Big Ten than those behind us. The games are still out there to win, but I think that with our offensive performance today people can see that it is not so ludicrous that we can at least compete and win some games other than against MAC teams and Indiana.

We are still a work in progress, but I am encouraged that it is work that can be done this season instead of over several seasons. That is the huge difference between us and Indiana, our alleged fellow basement dwellers, right now. The Hoosiers struggled to run the ball at home against a 1-AA team that is naturally overmatched against a Big Ten team. This is with them being a run-oriented team. We are still a pass oriented team, yet we ran with ease against probably a better defense. We seem much closer to being able to compete right now than Indiana, and that is how you get to the point of winning football games.

Our first shot has been fired. The rest of the conference has seen that we can still score at will against bad defenses. That is critical because they didn't think we could even do that. We now need just five more wins to reach a bowl game, which is still a reasonable goal for this team. More importantly, it is a more reasonable goal than it seemed to be before kickoff today. Finally, we are not satisfied with a relatively easy three touchdown win.