It is time to vote in the The Rivalry, Esq.'s Weekly Big Ten Power Poll. As promised, I am making my rankings this week comparison-style since all of them have been a hit so far. The real question going into the week though was what style should I use? I have only a one word answer for that:

You see, the Big Ten this year is down. I know it. You know it. We all know it. When Penn State loses a home White Out game to the same Iowa team that struggle with Northern Iowa, it is a down year. That is why the Big Ten is like Keanu Reeves. It is a big name in terms of conferences, but the actual performance on the field can leave something to be desired. Just Keanu is not known for his range, the Big Ten is not known for its range against non-conference foes. Put us in the right spot (like games against ourselves) and you can have an entertaining product. Put the Big Ten in a big time role (like a BCS game) and it just isn't going to work out.

So, what follows are the Big Ten teams ranked according to a certain Keanu Reeves role. Let's face it, we all need a little more Keanu in our lives. This is my tribute to Big Ten football, the Keanu Reeves of major college football. 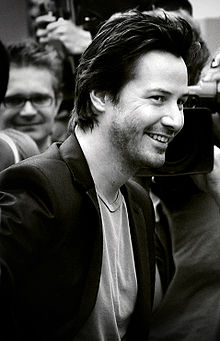 Michigan - Neo (The Matrix) - Michigan gets the number one spot this week because they have the best win over anyone. It came over a healthy Notre Dame team. Sure, they barely got a win over Indiana, but anyone who watched that game knows that Indiana played a damn fine ballgame. Like Neo, Michigan is dressed up by fancy CGI (the spread option) with a Matrix-like QB (Denard Robinson) that relies on flash and shifty moves. It looks good when it is working, but if you look at the actual acting on the surface it is true Keanu in that it doesn't have a ton of range.

Ohio State - Johnny Utah (Point Break) - I don't know why, but I have been obsessed with this movie lately. I am talking "wanting to buy it on Blu-Ray" obsessed. Johnny Utah fits in with Ohio State for more reasons than the fact that the character is a former OSU quarterback. They are the face of the Big Ten, but much like how you would trust Ohio State in a big game, would you really trust Keanu Reeves as an FBI agent? Now imagine Terrelle Pryor jumping out of a plane without a parachute to win a BCS title. The role of any Big Ten team in a BCS bowl is a lot like the role of Keanu in the stage hit Point Break Live!

Iowa - Kevin Lomax (The Devil's Advocate) - Iowa had to have made some deal with the devil in order to be 4-0 right now. That is the only reasonable explanation. The Devil's Advocate, however, is a very good movie under the surface (mostly because of Pacino). The same is true with Iowa as a football team. Keanu's horrible Southern accent is like losing Jewel Hampton to a knee injury. It is terrible on the surface, but the whole product is still pretty good.

Wisconsin - Jack Tavern (Speed) - "As long as we keep teams under 20 points per game we'll be fine." Can you picture Bret Bielema saying that like an evil Dennis Hopper to his team at halftime? I can. Keanu does virtually nothing in this movie except stand behind Sandra Bullock, yet he is still pretty good. It is the perfect vehicle for him. Wisconsin humming along at home is the perfect vehicle for them as well. Get them off the bus (Camp Randall Stadium) and who know what will happen.

Minnesota - Ted Theodore Logan (Bill & Ted's Excellent Adventure) - This is based on the coaching staff alone, as the idea of Tim Brewster's, "We're taking the Gopher Nation to Pasadena" is totally excellent! Brewster is a young coach too, so I am sure the movies are very fresh to him. Minnesota showed with Saturday's win at Northwestern that they can party on as long as they are well within their league. There is no word on if future society will be based on the teachings of Tim Brewster like the music of the Wyld Stallyns

Penn State - John Constantine (Constantine) - I make this comparison because they are clearly tortured souls when it comes to playing Iowa. If you put them against anyone else they are certifiable badasses trying to make up for their shortcomings against the Hawkeyes. If they are facing Iowa though, that is like God deciding to punish them as he does Constantine in the film. I don't know what good they will need to do in order to be admitted to heaven of a perfect season under JoePa.

Indiana - Shane Falco (The Replacements) - Indiana moves up even in defeat as they were very impressive this week. Much like Falco and the rest of the Replacements, absolutely nothing was expected of them. Instead, they are competing with the big boys and will likely have a much better season than expected. Keanu's acting in this film is not bad in the sports scenes, but some of his dialogue is dreadful. Plus, how much money would you pay to see the IU football team doing a rendition of I Will Survive led by Ben Chappell?

Michigan State - Bob Arctor (A Scanner Darkly) - When I rented this movie, I expected so much more. I expected a total mind blow of a movie with a coked out Woody Harrelson as a cartoon and everything. Instead, I felt like I needed to be high in order to understand any of it. That is Michigan State in a nutshell. So much more was expected of them, especially their defense. Instead, they have yet to deliver. Like Keanu in this movie, no one really know what they are doing.

Northwestern - Alex Wyler (the Lake House) - Both have prominent roles set in Chicago. Both are cute stories that it is a stretch to believe. Both don't have many people showing up at their houses. Yes, I have seen this movie and yes, I thought the general idea behind it was good. The movie is like Northwestern though. They need more of the Keanu Reeves action Speed and less of the Keanu Reeves pithy dialogue. At least in both Keanu got with Sandra Bullock. What would Northwestern's equivalent be, a trip to Phoenix for the Insight Bowl?

Purdue - Johnny (Johnny Mnemonic) - Johnny is a data trafficker who has an implant that allows him to securely store data too sensitive for regular computer networks. Purdue is a university skilled in technical aspects and computers. Johnny freaks out when he is given too much information in the film and Purdue freaks out and cannot close a game at the moment. Doesn't this sound familiar? I know I wish I had a memory chip in my head so I could simply erase the latest heartbreaking loss. Who is the Dolph Lundgren of our team? Just questions all around.

Illinois - Klaatu (The Day The Earth Stood Still) - This was terrible. I went to see it in the theater and it is just about the only movie I wish I could unwatch. It's awful in every respect, just like watching the Illinois offense right now. No one knows what they are doing, yet they are trying to remake it like the 2007 offense. It is appropriate then that it is an awful remake of a classic. Keanu's wooden performance is a spot on parallel to Juice Williams' wooden quarterback play so far.

Oregon (42-3 W over #6 Cal) - I guess our two point loss out there doesn't look so bad now. I get the feeling we will take a lot of credit for our close losses so far, but I want a win, dammit! In my mind, Oregon has a one game season now. If they beat USC in Eugene on Halloween they have no excuse for not winning the Pac-10.

Northern Illinois (L 31-34 to Idaho) - Looks like the Huskies weren't immune to the hangover, either. Our loss to them now looks much worse after they lost to probably the worst Division 1-A team of the past decade. This was a dominating game by the Vandals, as NIU had to stage a furious comeback to make the score as close as it was.

Toledo (41-31 W at Florida International) - This was a nice road win for the Rockets over two fairly evenly matched teams. The win over Toledo is still looking to be better than expected. I just wish we had a few more to go with it.