Share All sharing options for: Welcome to the Fold: Tracking Edition week 5

We had some Florida guys as official visitors this weekend. It is my hope that they are encouraged by the chance to make a difference rather than appalled as we all were at losing to a middle of the road MAC school. I know the one thing that encourages me about many of our 2010 commitments here is that they all come from championship level programs. That means before they even get to Purdue, they will know what it takes to win. That should carry over in the future. Hopefully yesterday was rock bottom for our program.

My assigned high school game this week was a blowout as Kokomo thumped Muncie Central 55-0. Of note, however, was Kokomo running back Braxton Shelton. Shelton is not receiving a ton of interest by many schools, but he did break former Purdue running back Dondre Johnson's all-time school rushing record in this game. Dondre was a year ahead of me at Kokomo and played just one season as a redshirt freshman in 1999. It is a shame that injuries ended his career prematurely as well, because he would have been a phenomenal running back at Purdue by the time he was ready to leave campus. After seeing Shelton a few times over the past few years he is a shifty back that fights for extra yards, but does not have a ton of speed. He might make a decent third back if shown a little interest.

Here is what our 2010 commitments did this weekend, including newest commit Jhony Faustin. 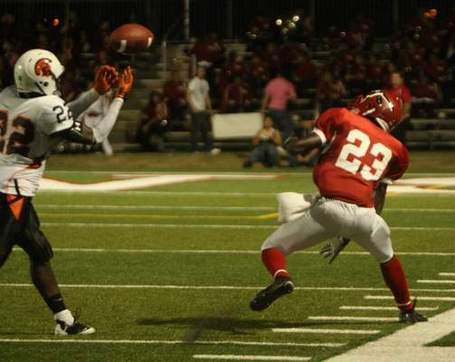 Purdue's newest commitment, #22 Jhony Faustin, had maybe the best week of anyone.

Sean Robinson - QB - Rochester, IL (Rochester) - I just noticed something in this week's article about Rochester's 49-7 win over Pontiac. They play in a place called Rocket Booster Stadium. Let us hope they boost Mr. Robinson to the promised land of the moon, meaning championships for Purdue since we're known for fostering the space program. Okay, I know there is a better way to link that analogy, but words fail me right now. As for Sean Robinson's performance, the young man once again had a solid game. He had 104 yards rushing and a touchdown to go with 235 yards passing and three touchdowns. With his size and running ability it will be very interesting to see what role he will play in next year's quarterback derby.

Joe Gilliam - LB - Southport, IN (Southport) - Southport gathered its second consecutive win by squeezing past Bloomington South 36-33. As usual, it is pretty hard to find some defensive statistics, but Gilliam apparently had a pretty good game. If anyone has access to the Bloomington newspaper (a pay site) Gilliam's name comes up quite a bit apparently.

Charles Torwudzo - WR - Brownsburg, IN (Brownsburg) - Chuck T had another touchdown in this game, this one a 44 yarder in the fourth quarter that was the winning score in a 21-17 win over Avon. He had three catches for 73 yards total. Brownsburg now sits in second place in the Hoosier Crossroads Conference a game behind unbeaten Fishers. Brownsburg still has game against Fishers and fellow second place team Zionsville.

Jeremy Cornelius - WR - Harrisburg, PA (Bishop McDevitt) - Cornelius caught two passes for 40 yards and a touchdown as Bishop McDevitt continues the winning trend for our recruits with a 49-16 win over Central Dauphin East.

Mike Lee - LB - Pittsburgh, PA (Woodland Hills) - Lee had a solid week in helping Woodland Hills move to 2-1 with a 37-7 win over Canon-McMillan. Lee actually has two catches for 20 yards on offense for the year, but I could not find any defensive statistics for him this week.

Ryan Isaac - DE - Michigan City, IN (Michigan City) - Well, our recruits were undefeated on the week until this game, as Michigan City fell to Merrillville 25-13 at home. Isaac had at least a sack in the game, but again, defensive statistics were hard to find.

E.J. Johnson - DB - Cocoa, FL (Cocoa) - Cocoa held onto its #1 ranking by the smallest of margins with a 15-14 win over Bayside Friday night. Kicker Cody bell nailed a 39 yard field goal with 4 seconds left for the win.

Will Lucas - LB - Lakeland, FL (Lakeland) - Will Lucas helped Lakeland coach Bill Castle notch his 400th career victory with a 60-0 win over Tenoroc Friday night. Lucas helped limit the Titans to 44 yards of total offense. The Drednaughtshave not surrendered a point in two games this season. Lucas leads the team with 21 tackles, five for loss, and two sacks.

Jesse Schmitt - LS - Louisville, KY (Trinity) - Trinity fell to 1-3 with a loss to Louisville St. Xavier 43-13, meaning Schmitt did not have many chances to long snap other than on punts.

Jhony Faustin - DB - Naples, FL (Lely) - Lely moved to 1-1 on the year with a win over Edgerrin James' former high school, Immokalee 21-6. Faustin had quite a game, as he had an interception and a 63 yard punt return for a touchdown that iced the game in the fourth quarter.

UPDATE: It appears that Faustin is no longer the newest commitment, as 3-star wide receiver Isaiah Williams from Monsignor Pace High down in Miami committed to Purdue Sunday night. Williams is a 6'2" 192 lbs receiver from another traditionally strong south Florida program. Monsignor Pace is also a very good academic school, so we are getting another player that will be well prepared academically. Here is what he did this week.

Isaiah Williams - WR - Miami, FL (Monsignor Pace) - Monsignor Pace got its first win of the season with a 20-8 win over North Miami Beach. I can't find a whole lot more about his performance, but I will be doing some looking this week.