This is a homecoming game of sorts for Northern Illinois. The Huskies feature eight players from the state of Indiana on their roster, with seven of them playing key roles as starters or backups. They are led by Chandler Harnish, an Indiana player who wanted to come to Purdue and very well could be our current starting quarterback had he ended up here. What we will see is an interesting game. We are facing a team that is very similar to Oregon in terms of style of play, as well as one that is in the second year of building a program under coach Jerry Kill. 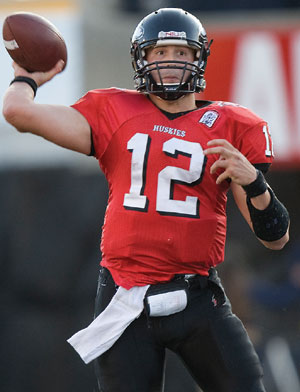 And for our next dual-threat quarterback...

The Huskies have put up some interesting offensive numbers so far. They had a tight game with Wisconsin that came down to the final possession to start the year. In that game, they trailed 28-6 going into the 4th quarter, but a pair of quick touchdowns and an onside kick meant they had a chance to tie in the final minutes. Against Western Illinois, the Huskies built a big lead and never looked back against their 1-AA foe. In both games, the Huskies have had a fairly balanced offense led by the versatility of Harnish.

As Mike Breese stated in the podcast last night, Harnish is a running quarterback that is attempting to stay in the pocket more this year. He had a better passing game against Wisconsin, but the Huskies ran more against the Leathernecks. So far he is 25 of 38 on the season for 317 yards and two touchdowns. Both touchdowns came last week against Western Illinois, but he has been sacked three times. After running for 539 yards and four scores last year he has not taken off as much. In two games he has just 31 yards rushing. His stats tell that he is an accurate passer. As a freshman last year he threw only nine interceptions, but he missed three games early in the season.

Northern Illinois is a run-first team out of the spread option, much like Oregon. Me'co Brown leads the team in yards with 181 yards and one score. He had a solid game against Western Illinois, going for 117 yards and a score. Chad Spann, an Indianapolis native, is the power back with 57 yards and four scores. He has two touchdowns in each game so far. All told, Northern Illinois has 325 yards passing against 344 yards rushing.

There is not really one main receiver that we must focus on. Ten different players have at least one reception so far, while none has more than Willie Clark's five. Spann has 3 catches for 50 yards and a score, while Clark (5-63-0) leads in yardage as well. Northern Illinois has not run many plays this year on offense, but they are experienced in playing from behind.

The offensive line may be one of the best in MAC. Eddie Adamski was a third-team all-MAC selection last season at center and makes few mistakes. Left guard Jason Onyebuagu joined him on the third team last year and has Big Ten size at 6'2", 305 pounds. Trevor Olsen, Panan Tense, and Kevin Skatrund were all starters last year at one point, making this line incredibly experienced. As mentioned, they have given up three sacks.

The Husky defense has been particularly frisky so far. As a team, northern Illinois has 10 tackles for loss, four sacks, and has forced four turnovers. The strength is in the front seven, but Mike seemed to be terrified of the threat that Ralph Bolden represents. Their best defensive lineman, Brandon Bice, has yet to record a sack after having 6.5 sacks last year. Linebacker Alex Kube is a player to keep an eye on. He has played all over the defense in his career, and he notched a team high 111 tackles during his sophomore season.

I think it is a bad sign that Northern Illinois' two safeties currently lead them in tackles. Tracy Wilson (21 tackles) and Mike Sobol (15 tackles) have the most stops on the team. That means teams are getting into the secondary against them even if Northern Illinois has not given up many points. They have yet to face an offense as prolific as ours, so this will be their most difficult challenge to date.

In terms of numbers, Northern Illinois has given up an average of 117 yards rushing and 211 yards passing. Those numbers are very respectable, but again, they have come against offenses that aren't exactly lighting up the scoreboard. I think you can throw out the 1-AA result because they did what 1-A teams should do against 1-AA teams. Wisconsin used a rushing by committee approach, while Isaac Anderson had a 100 yard day as a receiver. We will need to keep an eye on linebacker Cory Hanson, who already has two interceptions.

Honestly, this is a game in which our offensive line should continue its dominance. The defensive line has not done a whole lot yet, and they are already shorthanded because projected starter Mike Krouse is out for the season with a heart ailment. Since our running game has been very successful so far I think we can expect another good day from Ralph Bolden. I say we run it until they prove they can stop us, keeping things held back some for Notre Dame next week.

This area has been a major strength for the Huskies so far. Mike Salerno has shown why he is one of the best kickers in the nation by going 4 for 4 on field goal attempts with a long of 40 yards. He has also been solid on kickoffs, limiting teams to 18 yards per return. Josh Wilber is averaging 39 yards per punt on seven attempts. No one has managed to break a big punt return against them yet, either.

Northern Illinois' return game has not done much yet. Tommy Davis pulls double duty on returns, with a long of 25 yards on a kickoff return. This area will be of special concern for us, as our coverage on kickoffs has been spotty at best. We cannot afford to give up a quick return for a score.

With all respect to our visitors from the MAC, this is a MAC vs. Big Ten game. We have not lost one of these games in 6 years, despite having two awful seasons in that time. The Northern Illinois defense is without a doubt better than Toledo's, but I am just not convinced their offense can keep pace with us. Defensively, we gave up just 21 points last week to a similar type of offense with much better athletes. That was on the road as well. Harnish might be a better passer than Masoli was, but Masoli was a much bigger running threat. That is more dangerous against us.

I must say, I have a good vibe about this game.  I feel like our defense is going to come together and have its best performance of the season. To me, Northern Illinois is a good team, but they are still about a year away from being really good. Many people are still talking about us being vulnerable, about how we will have this hangover from Oregon, how this is a trap game before Notre Dame, but I think differently.

I don't think coach Hope is going to allow any letdowns this year. I know Boilerdowd and J Money were talking about this earlier this week, but this is a good measuring stick to see how we recover from a rough loss. In recent years, it has started a deep spiral. I think we will now come out and have a convincing performance against a team we should dominate. I think we also do it without showing too much heading into the Notre Dame game:

I think it will be a very good sign if we win this game without too much effort. Those who don't respect us are still expecting a struggle. We can begin by making a statement in this game with a comfortable win before facing the Irish next week.