Welcome to the Fold: Jhony Faustin

Share All sharing options for: Welcome to the Fold: Jhony Faustin

I am a little late to the punch here because the news broke late last night, but Purdue has its next high school commitment on board. His name is Jhony Faustin, and he is the latest example of Florida speed that is heading north. His Rivals profile lists him as a 3-star cornerback recruit, while Scout lists him as a 3-star as well. I don't like that he is a smaller corner at 5'10" 170, but he is a productive player from Naples Lely High. 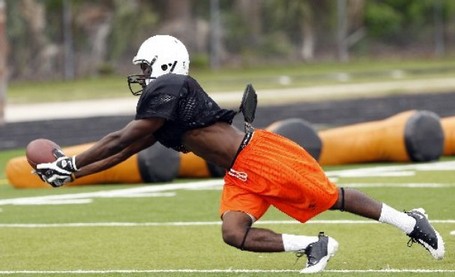 Once again, another solid athlete from Florida. I like this direction from coach Hope.

So far on the season Lely is not off to a great start. They opened the season with a 34-14 loss to Miami's Gulliver Prep, but Gulliver Prep is one of the top football programs in Florida (Sean Taylor was an alumnus). Week two saw a 34-16 loss to Gulf Coast High, making the Trojans 0-2 on the season. Faustin is listed as a running back/defensive back, but does not have any offensive stats on the year. Defensively, he has 14 tackles and an interception on the year. His one interception already matches last year's season total.

Like many Florida athletes, Faustin is a bit of a track star. He has competed at a fairly high level in some sprint events as well as both the long jump and triple jump. Having that leaping ability will come in handy at the next level.  He has also been known to return punts at times. This could be a huge benefit, since we haven't really had a punt return threat since Anthony Chambers was here.

This article is a better preview on how Lely looks this year. They are playing in a pretty tough division down in Florida, so there may not be much postseason success. The plus side is that Faustin will get to compete against some pretty good athletes. That means he will have plenty of opportunity to improve against top notch competition.

With this commitment we now have six three-star guys on board. Last year we managed just seven three-star players, most of which committed late. I would also be shocked if E.J. Johnson and Will Lucas ended up as three-star guys once they are finally rated. This is also a solid commitment because it continues our presence in Florida. Faustin is our highest rated player of the three current Florida commits. He is also the smallest, but the fastest of all the current commitments.

I like this guy. It seems like he could come in and make an impact early, especially with the needs we will have in the secondary next year. He seems to play bigger than he is, which is always good in a cornerback facing the bigger receivers we always face. I'll add him to the weekly tracking report and we'll see how he does the rest of the year.