I Am An American

Share All sharing options for: I Am An American 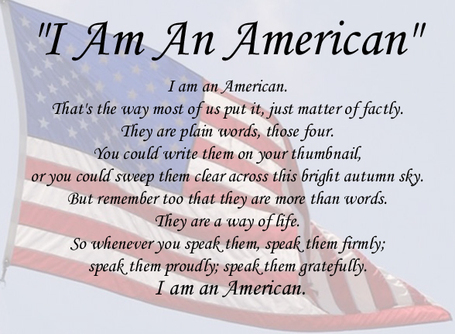 Eight years ago today our country was attacked. I know my story is not a whole lot different than a lot of people's stories, but it is appropriate that I share it here on a Purdue blog because I was in my senior year at the time. We had filmed the first episode of our TV show, Off the Tracks, the night before and I didn't have class until noon on Tuesday, so I slept in. When I woke up the next day around 10am the first thing I did was turn on the TV. I immediately knew something was wrong because I had left the TV on ESPN, but instead of Sportscenter I saw the World Trade Center on fire.

Not the best way to begin the day.

I immediately called my mom back in Kokomo. I knew she would know what was going on because she was my nephew's babysitter at the time and had to be at my sister's every morning by 7am. She told me what was going on as I watched the second tower collapse live on TV. I gradually saw everything as, basically, the world was going to hell.

What I remember most about the day was how perfect the weather was. It was strange though, because by the time I got to campus it was too quiet. It then occurred to me why. Since all air traffic was grounded there were no planes on final approach over the Memorial Mall and such. If you spend any time on campus you know there are small planes flying overhead almost every 15 minutes because of the aviation school. On such a beautiful day it was disconcerting to see no planes at all.

The rest of the day was a blur. One of my classes was cancelled, while nothing really got done in the other two. That night I had to work in the production studio for my normal shift, so I was grateful to get away from the TV and the coverage for moment. Purdue was among the first to move its football game scheduled for that Saturday, as we moved the Notre Dame game to the end of the season before football in general was cancelled. I also remember I lost Cubs tickets for a game that got moved from the following Sunday.

What stands out to me still is everyone's reaction afterwards. In an effort to just get out and feel something normal my friends and I went to the Neon Cactus on Thursday night. There, in the Piano Bar, was a spontaneous rendition of the Star Spangled Banner that had everyone standing on chairs and tables. I also remember the giant flag at the first home football game, 11 days after September 11th, and the silence in the stadium that was only broken by a trembling Roy Johnson beginning "I Am An American" before the Akron game.

You see, that tradition was one of the proudest traditions we have at Purdue. I remember cheering loudly with 45,000 other Purdue fans at the Rose Bowl just from hearing Roy begin it. It was totally unexpected that we would be doing the pregame there. To me, hearing it with the Southern California sun in my face on New Years Day finally made the Rose Bowl experience real. Who knew that the next time I heard it, it would be deathly silent in front of so many people? Those four words brought me chills even before September 11, 2001. Now, I am one of those in the stadium saying them as loud as I can, and even then it is a little dusty near my seats. Those words still ring true, and will always ring true.

No matter what people do to attack this country and its people we are still here.

You see, that entire week I still did what those attackers didn't want us to do. I went to school. I went to work. I drank beer and looked at women that showed more than their eyes and wrists in public. I did not let them stop me from my life. I did not cower in fear as they wanted.

This is just my story of that day. If you would like to share yours in the comments I would love to hear them. I did not even have the luxury of a moment of normalcy on that day, as some did. When I went to bed, however, I was still free. I am still free today.