Boilermakings is ready for some football!

Share All sharing options for: Boilermakings is ready for some football!

And no, I don't mean the World Cup qualifiers happening all over the world this weekend. Though my strange new addiction to soccer does have me keeping an eye on those, This weekend is all about college football. Like most Purdue fans, I'll be keeping an eye on the Boise State-Oregon game our friends at Addicted to Quack are so excited about this Thursday. As I ramp up back into game coverage for the first time since basketball season I have a whole mess of stuff to discuss in this edition of Boilermakings. 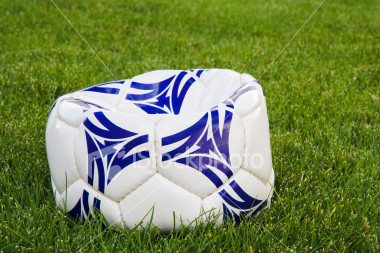 Not that kind of football...

Debut of the Big Ten Power Poll - This season I will be running my Big Ten recaps and previews a little bit differently this season. My friends at the uber-Big Ten blog The Rivalry, Esq. are taking advantage of the fact that SBNation is now fully entrenched in the Big Ten (with only Lake the Posts and Northwestern as holdouts). First of all, they are doing a running "Final Argument" series on each team in the conference. Purdue will be posted shortly after noon today, but it won't be pretty. They are already predicting that nine teams from the Big Ten will be bowl eligible, and both Purdue and Indiana will be the two teams home for the holidays.

Secondly, they are officially organizing a Big Ten power poll among the SBNation Big Ten blogs. As a result, I'll be doing my weekly power rankings there as a ballot, shortly after my weekly Blog Poll ballot. Here are my pre-season rankings, with explanations for each:

1.       Penn State - They are the defending champs and have all their tough games at home until the season finale at Michigan State. They have my #1 vote until proven otherwise.

2.       Ohio State - In my mind, they are head and shoulders above everyone else except Penn State.

3.       Iowa - I think there is a big divide between here and Ohio State, but Iowa is the best of the rest. How healthy is Jewel Hampton, though?

4.       Northwestern - The first shocker pick, but I see this team being very solid if they get a consistent running game. They will have plenty of confidence from an easy non-conference schedule.

5.       Michigan State - The defense should be great. The offense may take a little while to come along.

6.       Illinois - This is another area where there is a big gap between them and the team above them. There shouldn't be, either. Illinois has too much talent, but no one trusts them yet.

7.       Wisconsin - This is a shaky pick as well. Everyone is saying Northern Illinois has a great chance to upset us, but don't be shocked if their Big Ten upset comes Saturday in Madison should the Badger offense struggle.

8.       Purdue - I believe in Danny Hope (see later this week). If you listen to everyone else, we're going to struggle with Toledo. I think we will turn some heads with a very smooth win over the Rockets.

9.       Minnesota - I just wasn't impressed by them, and I think Purdue let one get away against them last year. If Curtis Painter does not get hurt I think that becomes a Purdue win. There is big potential for a move north though.

10.   Michigan - RichRod seriously has to be considered one of the worst coaches in the Big Ten at this point. I mean come on, pick a quarterback already! This doesn't even consider allt he former players ratting on them. If an experienced Western Michigan wins Saturday expect the noise to get very loud in Ann Arbor.

News from the enemy as game time approaches - The noted (only?) Toledo blog out there, Midnight Blue and Gold, has started to talk about this Saturday's game in West Lafayette. I'll be re-posting my Know thy Opponent from earlier this summer  later this week, but the guys over at Midnight Blue & Gold asked me to step in and give them five keys to the game for Purdue.

News from the enemy part 2 - Midnight Blue & Gold is also reporting that three Toledo players, including leading rusher Morgan Williams, have been suspended for Saturday's game. To me, this makes it even more paramount we shut down their running game.

News from the Enemy part 3 - Rocket Digest has gone as far as to predict an upset in West Lafayette, mostly because of its senior class. No offense to Toledo, but if Purdue loses Saturday we are going winless in 2009.

Women's soccer scores big upset - Hopefully this will go better than the last time Purdue began the season with a huge upset. A few seasons ago, the women's soccer team began the year with an upset victory at #1 Portland. The Boilers reached as high as #5 in the nation, but were upset in round two of the NCAA Tournament by Indiana. Purdue started the season in earnest last Friday with a 3-2 upset of #6 Texas A&M in College Station. This followed season opening wins over Butler and Ohio the previous week. The ladies play again in the Boilermaker Challenge Cup this weekend, taking on Valparaiso on Saturday at 5:30 and Ball State Monday at 5:30.

Women's volleyball begins season 2-1 - The volleyball team will likely lose its #19 ranking after losing the championship match of the Mortar Board Premier event to Dayton 3-2. This came after opening wins over Ball State and Coastal Carolina.

Crimson Quarry previews Purdue - This is a pretty even keel preview of us by John at the IU blog, Crimson Quarry.

Mark Polansky and David Wolf talk about space - More from Purdue's two more recent astronauts. They still get my vote for Coolest Guys Ever for having a Purdue flag unfurled in space.

Brees throwback jersies spotted in Greenwood Park Mall - Thoughts? (and that is Dallas Clark (Iowa) and Brett Favre (Southern Miss) next to him) 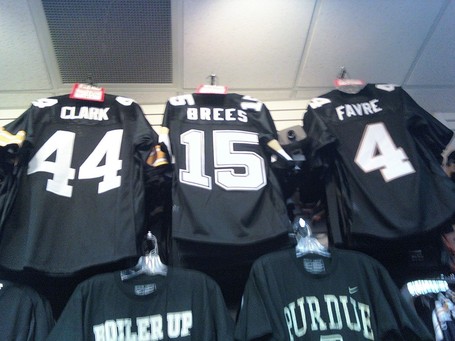