Share All sharing options for: Know thy Opponent 2009: Michigan Wolverines

I will go on record before even starting this preview that we will lose the Michigan game. It does not matter how good we are or how bad Michigan is. We have proven over the last 40 years that we simply cannot play good football at Michigan Stadium. We have had great quarterbacks like Drew Brees, Mark Phipps, Kyle Orton, and Mark Herrmann go winless there. Some of our best teams in school history, such as our 9-4 team in 2003 that was very close to being 12-1, have gotten blown out there. Even when we have a miracle and a Jim Colletto coached team holds the Wolverines to five points in 1995 we couldn't get one damn touchdown to win the game.

Theoretically, this should be the year we're at least competitive. Then again, in theory, communism works. Michigan won't be "Michigan" this season or, in my opinion, as long as Rich Rodriguez is their head coach. There is absolutely no excuse that with the talent Michigan recruits without even trying they should ever have a 3-9 season. Still, that doesn't mean we're going to win there this year. The Michigan game at Michigan officially reached the "until I see it happen" stage as far as predicting a win goes. After we rolled over and died against a team that couldn't stop a 1-AA team two years ago I no longer have any hope for ever seeing a win up there. 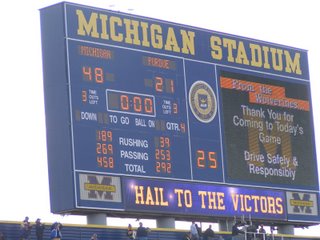 This is your typical Purdue-Michigan score in Ann Arbor, though we usually don't get 21 points. Thanks, Joey Elliott, for the meaningless touchdowns in the last two minutes.

Last Season for the Wolverines:

Rich Rodriguez is very lucky I am not Michigan's athletic director, because I would have fired him after last year's 3-9 debacle. Michigan was very lucky to win the three games it did win. Michigan probably played its best in a 25-23 loss to undefeated Utah in the season opener. In that game, a missed 2-point conversion in the final minutes cost the Wolverines the tie. It got worse from there. Home losses to Illinois, Toledo, Michigan State, and Northwestern meant just a 2-5 home record. On the road, the Wolverines managed just a 29-6 win at Minnesota to go unbeaten in the Metrodome. It was bad, but it was made even worse by the fact that this is a team filled with more raw talent than 110 other teams every year. Like Notre Dame in 2007, there was absolutely no excuse to be that bad.

This year's schedule does not guarantee a return to a bowl, either. Western Michigan is a very good MAC team that could win the season opener. They are certainly better than Toledo was last year. Though we will be cheering for the Wolverines, a victory in game 2 over Notre Dame is far from a guarantee. It is never a good sign when Indiana thinks they can beat Michigan. Road trips to Michigan State, Iowa, Illinois, and Wisconsin in conference play are not easy, while Penn State and Ohio State come to Ann Arbor as conference favorites. Michigan should be better in year #2 of RichRod simply because of more experience, but making a bowl game could be a stretch.

Michigan did not have consistent quarterback play last season, but that was blamed on Steven Threet and nick Sheridan not being the right guys for the system. Threet is gone and Sheridan has been relegated to backup for true freshman Tate Forcier. With Forcier, the Wolverines may now have an edge in the cocky quarterback who hasn't accomplished anything of note department over 2-year defending champ Jimmy Clausen. At least Clausen didn't open a website to flaunt his recruiting and high school championships.

Seriously though, Forcier is expected to be the savior of Michigan football. He is a great passer while on the run and he has the ability to make something out of nothing with his legs. While his high school numbers were good, he doesn't have an overwhelming amount of size at 6'1" 187. He will be an exciting player to watch, but I am encouraged that we see many of quarterbacks of his style (Jeremiah Moseli, Chandler Harnish, , mike Kafka, Terrelle Pryor, and Juice Williams) before we see Forcier. He will be the least experienced of that group, so if our defense handles those before him well we should be able to handle Forcier.

One player that does scare me is running back Brandon Minor. Simply put, Minor owns us. He had just 553 yards rushing and nine scores last season, but against Purdue he went for 155 yards and three scores. If not for an injury after three carries in the 2007 game he would have even more yards. As it was in that game, we allowed Mike Hart to run for 102 yards and two scores in a half, followed by third string Carlos Brown's 66 yards and two scores. Both Brown and Minor are back as the top two running backs. We have proven that we cannot stop any Michigan running backs based on our last three games with them, so I have little hope we will start now.

With as bad as Michigan's quarterbacks were last year, the receivers were non-factors in most games. Martavious Odoms had the biggest impact as a receiver in last year's game, and that came on a 73-yar punt return for a score in the first quarter. It was his only touchdown last season, though he did lead Michigan in receiving with 49 catches for 443 yards. Greg Mathews (35-409-2) ranked second on the team, and tied Minor for first in touchdown receptions. Michigan only generated 11 passing touchdowns last season, but two of them came against Purdue. Junior Hemingway should emerge as a solid third receiver after missing most of the year with an ankle injury. Roy Roundtree, the four-star recruit that spurned Purdue for Michigan before last season, redshirted and is still busy getting splinters out of his rear end. He is not on the two deeps at receiver.

The offensive line wasn't great, but wasn't awful last year despite losing three starters. While it was a weakness last year, it should be a strength as this season all five projected starters have starting experience. Right guard David Moosman and center David Molk are the anchors as they started every game at their respective positions last year. Mark Ortmann also has plenty of experience at left tackle, leaving Stephen Schilling and Mark Huyge to start at left guard and right tackle, respectively. Their biggest problem last season was learning a new blocking scheme as the offense drastically changed. They took some blame, but they are not the reason Michigan quarterbacks threw 12 interceptions and completed less than 50% of their passes.

It is hard to argue what was worse in 2008. The Michigan offense averaged barely 20 points per game and scored more than 20% of its season total against Purdue alone. The defense gave up 29 per game and got burned by a third string quarterback making his first career start. That game was a microcosm of Michigan's season. Just as the offense finally figured some things out the defense turned in an even worse performance. It doesn't matter how much better the offense gets this year unless there is marked improvement on the defense. 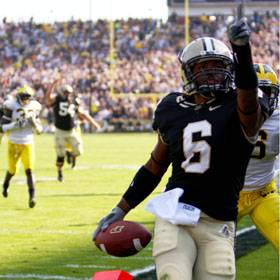 A rare positive moment for Purdue against Michigan.

The defensive line could be a huge liability this season. Only Brandon Graham (46 tackles, 10 sacks) is a proven performer up front. Michigan will probably play quite a bit of 3-4, meaning Mike Martin at nose tackle and Ryan Van Bergen at the other end position will have to play well as starters. True freshman William Campbell at 6'5" 330 pounds will likely see time in the rotation at tackle as well. This was supposed to be the best part of the defense last year, but it was a disaster with all its experience. Now they will have to improve without much proven experience.

Linebacker Obi Ezeh had a good year, leading Michigan with 98 tackles. It was a good freshman season for him on the outside, but more will be expected from him. Jonas Mouton started every game except the Utah game and was second on the team with 76 tackles. There is a question of when he will be ready after missing spring practice with shoulder surgery. Brandon Herron and Steve Brown will provide speed at the other two linebacker positions, with Brown being a hybrid safety/linebacker

Safety is the one position on defense where Michigan appears to be totally set. Troy Woolfolk, Steve Brown, and Michael Williams will all start the season, but much is expected from incoming freshman Vladimir Emilien. Emilien is expected to make a huge impact, and could be starting by the time the Purdue game rolls around. At cornerback, Michigan has plenty of good tacklers, but there isn't a true shutdown corner. Donovan Warren had 52 tackles and an interception last year. He will be joined on the other side by Boubacar Cissoko. Cissiko is a bit undersized at 5'9", but we lack a big receiver to take advantage of that.

I love the guys over at Maize N' Brew. Not only was I able to meet Dave after last season's Purdue game, they have developed a cult following around Michigan's punter. Zoltan Mesko, whom I would call Destroyer of Worlds with a name like that, has been dubbed the Space Emperor by the staff at Maize N' Brew. It may be because  he had so much practice due to Michigan's awful offense, but Mesko may be the nation's best punter at 43 yards per boot. He pinned opponents inside the 20 24 times last year and opponents only averaged 7.9 yards per return.

Michigan must find a new placekicker this season after the departure of K.C. Lopata. Bryan Wright, who was a kickoff specialist last season, and freshman Brendan Gibbons will battle for that job.

On paper I have a hard time seeing how Michigan is going to be much better than last year. The only guaranteed wins are Eastern Michigan and Delaware State. Still, this game is at Michigan. Their dominance of us is perplexing because there have been many different factors, but the result has always been the same. They blow us out nearly every time. If this game were at Purdue, where I have been personal witness to three of our all-time 13 wins against them (all since 1996), I would give us a major advantage. If they were winless and we were undefeated I would still pick Michigan by two touchdowns because of our baffling inability to play good football up there.

I expect this to unfold like every other Purdue Michigan game in Ann Arbor since 1966. The Wolverines will dominate in the running game. Brandon Minor will have a he day by running for close to 200 yards and a couple scores. No matter how well we are playing, we will have stupid turnovers and be unable to capitalize on the few mistakes that Michigan makes.

It doesn't have to be this way, either. This is absolutely a game we should, on paper, be able to win easily. Tate Forcier is at least a year away from running that offense with precision. The Michigan defense looks to be extremely vulnerable against the run. All we should have to do is run the ball, make a few pass completions, and stop them from running the ball. We should have a better chance at winning here than we do at Minnesota or Wisconsin, but because of our history in Ann Arbor I fully expect to get rolled.

If it doesn't happen this year, I doubt it will ever happen. We have got to break our long drought at Michigan Stadium. If Toledo and Appalachian State can do it, why can't we? It is because we are Purdue, and we leave all football playing ability at the Ann Arbor city limit. Michigan 24, Purdue 6