Know thy Opponent takeover: Hail to the Orange

Share All sharing options for: Know thy Opponent takeover: Hail to the Orange

The feature returns this week as Toki Wartooth stopped by from the Illinois blog Hail to the Orange to answer some questions about the Illini. I view this game as a major swing game for us. Illinois is a team that feels like it should be much better than it actually is. We get them at home and we have held the Cannon for six years now. Toki talks about Illinois' chances of taking back the Cannon and their ability to get back to a bowl game after falling hard in the Rose Bowl two seasons ago. 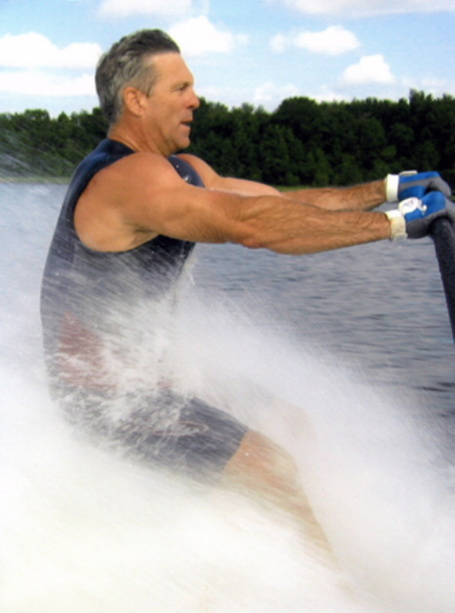 Bloggers are contractually obligated to show this picture every time they talk about Ron Zook. It is a fact.

Hammer & Rails: Ron Zook - He's a waterskiing mogul and a hell of a recruiter, but his coaching is still a question mark. Is he really on the hot seat this year? What does he need to do to keep moving forward?

Hail to the Orange: He needs to make the most of what he has. I consider this year the defining season of the Zook era. He has said in the past that you can't really judge a coach's progress until he has had a full recruiting class come in and graduate. His first full recruiting class, with Juice as the crown jewel, are entering their senior year. He has to make a bowl game this year for many people to keep faith in his program. If he can't win with the talent that he has amassed on the field, he may not ever.

H&R: I haven't paid much attention to Illinois for two years since they have been of the schedule. Aside from the Rose Bowl and stadium renovation, what changes can Purdue expect to see since 2006?

HTTO: When last these two teams met, the best receiver on the Illini was a walk-on player whose primary sport was baseball. This year you will see Rejus Benn, Jarred Fayson and probable NFL draft pick TE Mike Hoomanawanui. This team also plays much faster than it used to, helped my the overall upgrade of talent at most positions. The drawback, this team has been making more mistakes and costly penalties the longer that Zook has been here. Imagine having two game winning touchdowns called back in two years because of stupid mistakes.

H&R:  Is Juice Williams progressing or regressing as a passer as his career goes on? Would you like to see him throw more or run more?

HTTO: Just looking at his passing yardage from '07 compared to '08 will show that there is concrete evidence that he is getting better as a passer. In the season opener against Mizzou last year he exploded for 450 yards and 5 TDs. Unfortunately one major flaw in his passing game remains, the INTs. His TD/INT ratio was 22/16. If he can keep his TDs up and reduce his INTs by only a third, this team will be frighteningly effective on offense. As for the question about running and passing, it is an interesting fact that even on a team that returns every player that carried the ball last year, Juice is the leading returning rusher. He is perhaps just as dangerous carrying the ball as he is throwing it.

What I would really like to see is a running game that will step up so that Juice will not have to put so much of the offense on his back. Let Jason Ford or Daniel Dufrene get those tough yards. I think Juice is most effective when he can use his arm to get respect from the defense, and still has the option of his legs to improvise and make big plays.

H&R: First J Leman, then Brit Miller. Is it true that Martez Wilson is better than both as a middle linebacker?

HTTO: Well, how do you define better? Because he is bigger and faster than Both Miller and Leman, but he has yet to really breakthrough on the field. He is certainly going to have plenty of opportunities. The last two Illini middle linebackers have led the Big Ten in tackles, so Martez will be involved in alot of plays this year. He has been accused of being a bit lazy on the field by former Illini great Dana Howard, and it is widely believed that if he can commit as much to the play as Brit and J, he will be All Big Ten. Its important not to forget however that while there is alot expected from Tez, he was stabbed several times last December, and no one really knows if it will have an effect on his play.

H&R:  Illinois has a strange schedule this year. How much will the pair of tough non-conference games at the end of the schedule affect the season?

HTTO: The more I look at the schedule, the more I like it. This is a schedule that is no cake walk but allows for two bye weeks to allow the Illini time to prepare for @ Ohio State and @ Cincinnati. Playing later in the year is something that many people have clamored for over the years, and should the Illini be in the position to qualify for a bowl game, it should help in that regard. Playing outdoors in Champaign in December on the other hand is going to be one cold ass proposition. And if lets say the Illini at the end of another disappointing season, it could be mighty tough to fill a chilly stadium for a non BCS opponent like Fresno State.