Share All sharing options for: Welcome to the Fold: Tracking Edition - Week 2

Most of Purdue's incoming recruits got their seasons underway this past Friday night, while the Florida guys will have to wait for another couple of weeks. For our Indiana guys, it was week two of the season. For most of them, it was a final non-conference game before conference play gets underway next week.

The game I covered was Cass at West Lafayette. That was an interesting on as it featured two smaller school powers. Cass was the class 2A state runner up last year, while West Side is ranked #3 in class 3A. West Side won 35-32 behind quarterback Daniel Wodicka. Wodicka is an interesting athlete that could contribute in a walk-on role some way if he decided to stay home for school. In the mean time, here is what our committed guys did this week.

Sean Robinson - QB - Rochester, IL (Rochester) - Robinson led his team to a 38-22 win over Mahomet-Seymour high in the season opener Friday night. Robinson threw 19 times, completing nine passes for 155 yards and two scores against no picks. He also had 14 carries for 108 yards. 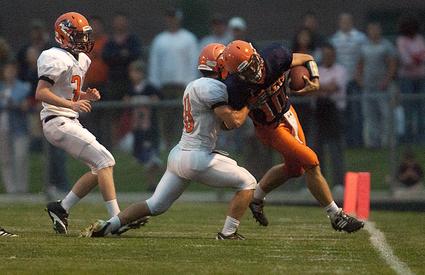 Sean Robinson (#10) had a very impressive debut for Rochester.

Joe Gilliam - LB - Southport, IN (Southport) - Southport ran away from Anderson for a 62-34 win Friday night. Southport was ahead 41-0 before Anderson even scored, so it is likely Gilliam did not play much. I found no word on Gilliam's stats, but he did have a fumble recovery in week one.

Charles Torwudzo - WR - Brownsburg, IN (Brownsburg) - Brownsburg moved to 2-0 on the year with a last minute 21-14 win over Noblesville at Lucas Oil Stadium. Torwudzo played for the first time this season after being suspended for the opener and caught two passes for 69 yards. Of course, one was a 68-yard touchdown catch, so the big man had a good season debut. Brownsburg next travels to Class 5A #5 Hamilton Southeastern (home of Chris Summers and Chris Carlino), who was upset by Fishers Friday night. 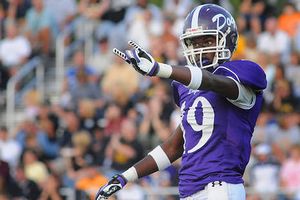 De'Ron Flood - TE - O'Fallon, IL (O'Fallon) - O'Fallon found itself in a defensive struggle with #2 Cahokia, but a late score was the difference. Cahokia won 8-3 to put O'Fallon at 0-1 on the young season. Flood caught two passes for six yards.

Josh Davis - DT - Plain City, OH (Jonathan Alder) - Alder lost its season opener 35-28 to Worthington. Like finding stats for Gilliam, it was hard going to find stuff for Mr. Davis. Strong storms also moved this game from Friday to Saturday. UPDATE: Josh's dad was kind enough to e-mail some stats from this game. He had 15 tackles, 2 assists, and a QB hurry as he won his team's D-line award in the game. Josh's dad also had this to say about the game:

Thomas Worthington is a Division 1 (Largest school size) and Jonathan Alder is a Division 4 school. This was a hard fought game. TW is primarily a passing team. QB had 3 step drop with short quick slants. Defensive backs were playing way to deep. Deep patterns were controlled by the QB rolling out away from the rush. - Josh Davis' dad

Mike Lee - LB - Pittsburgh, PA (Woodland Hills) - Woodland Hills also will not begin its season until September 5th with a home game against Steubenville. Woodland Hills is unranked in the preseason polls after a 4-5 season last year.

Ryan Isaac - DE - Michigan City, IN (Michigan City) - Michigan City moved to 2-0 with a last second 13-10 victory over South Bend Washington. The only thing of note for Isaac was that he was flagged for a personal foul in the game. The event sounds rather interesting, as the player he facemasked threw his helmet at Isaac and had to be restrained. The Wolves are already halfway to last season's win total.

E.J. Johnson - DB - Cocoa, FL (Cocoa) - Cocoa has a very late start, not getting underway until September 11th with a home game against American Heritage. Cocoa carries a #1 ranking into the season in Florida's class 2A. That is to be expected though, as they are the defending state champion in that class.

Jess Schmitt - LS - Louisville, KY (Trinity) - The #1 team in Kentucky was the victim of an upset as Lawrence North made the drive down from Indianapolis and upset Trinity 31-14. Schmitt, as the long snapper, appeared to have few problems though.