Welcome to the Fold - Chris Kramer?

Share All sharing options for: Welcome to the Fold - Chris Kramer?

As Mrs. T-Mill and I were headed to dinner on Friday night I had an idea. I know it was rooted in an article Gold and Black Illustrated did in its print edition this past basketball season, but the recent Greg Paulus situation means that the article in question could actually happen. For those that don't pay much attention to Duke basketball, point guard Greg Paulus, a Gatorade National Player of the Year in high school football, decided to pick the sport up again with the one year he had left of eligibility. NCAA guidelines state that once you begin playing one sport you have 10 consecutive semesters to use four years of eligibility in any sport. After playing four years of basketball, Paulus could play one year of football if he so chose. That is what he did, as he will be competing for the quarterback job at Syracuse this fall. 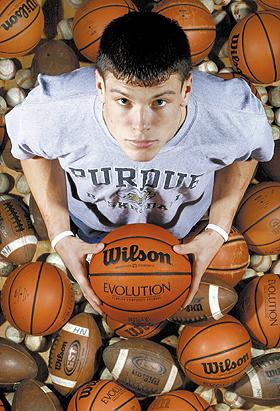 GBI's article was more wishful thinking than anything. Our own point guard, Chris Kramer, was an accomplished football player in high school as well. The kid is just a natural athlete. He was an all-state quarterback and was also a hell of a third baseman on Huntington North's baseball team. GBI dreamed of having Kramer as a hard-hitting safety if he had chosen football instead of basketball. Many people directed him towards football, but basketball was his first love.

In light of Paulus' choice, why not make it a reality?

After this coming basketball season, Kramer's basketball career at Purdue will be over. As much as we love him, his professional prospects are rather limited. He would, however, have one year left in which he could still play football. As it happens, all four starters in our defensive secondary will have exhausted their eligibility after the 2009 season. This leaves a gap where all four starters need to be replaced and new depth is needed.

Could Kramer be part of the solution in 2010?

Kramer played mostly quarterback at Huntington North, which is where he developed his tenacity on the basketball court. Huntington has not been a strong program in the state historically, but Kramer was pretty much a one-man difference maker in 2005. He ran for 997 yards and threw for 1,336 more yards. The Vikings were only 5-5 that season, as Kramer had to do much of it himself.

He also played defense at safety and linebacker that year, something that no Huntington North player has done since. He was hard-hitting and unafraid to go after people that dared to venture over the middle of the field. This could easily be his role if he decides to move across the street to Ross-Ade Stadium in 2010.

I posed this question on GBI's football board Friday night and got a pretty solid positive response over the weekend. The best line, from a poster named nate_h, was, "What better way to piss off the rest of the conference than to have Chris Kramer ruin their day for another year in a different sport?"

At the very least, he would create more competition at a position where no one really knows what to expect. Most likely he would be used as a safety, with a chance he could step in and play linebacker. Let's look at what we would have at the safety position alone:

Josh McKinley - Would be a senior by then. Has the most experience of those returning and will provide needed depth this year.

Albert Evans - Would be a junior. He is another guy that will provide depth this year as he moves from linebacker to safety.

Logan Link - Junior, is a walk-on.

Gavin Roberts - Sophomore, will likely play some special teams and such this year.

Could Kramer make the two deep with all those players? Absolutely! At 6'3" 205 he would have the most size of anyone in the secondary. I would bet that McKinley and Evans would be the starters, but Roberts is so far unproven. At the very least, Kramer would be in the same boat as Johnson in terms of experience. If Kramer does decide to make the move he could even gain an edge by participating in spring practice after basketball season is over next spring.

From a fan perspective, we would love it. That was the general consensus from my query on the GBI board. People would love to see him suit up for football and have even more opportunity to frustrate other teams. As Realengineer said, "You cannot teach courage and competitiveness. You provide opportunity for people to demonstrate that they have these qualities! Ross-Ade noise will be off scale if #3 suits up and is on the field!"

All it would cost is a one-year scholarship too. It would allow Chris to get a jump on a master's degree of his choosing, so in that regard it makes sense. I doubt it would come to this, but it would also provide a tiny bit of insurance if a large rash of injuries attacked what will be a deep quarterback position. That gets me to thinking about the offensive possibilities of seeing Kramer on the field.

Most people have seen him as a safety or special teams ace, but what if we lined him up at running back or fullback? I certainly can picture him clearing the way for Al-Terek McBurse and Ralph Bolden. His quarterback past would also open up the playbook to a trick play or two if we threw him on the offensive side of the ball for a few plays. At the very least, it would make other teams think about something else even if he is there as a decoy.

Ultimately, it is Mr. Kramer's decision. His first priority is the 2009-10 basketball season which has plenty of promise in its own right. In my mind, there is little question Chris can make the transition and at least contribute in a small way if he wants to. We're ranked 63rd by CFN this season, so it can't get much worse, anyway. What do you readers think?