I apologize for the lack of quality updates recently, but we are in that valley week before the first game where there is not exactly a whole lot to talk about. Fortunately, this has corresponded with a very busy time for me personally, as I try to figure out the logistics of where I am going to live for the next year and what I am going to do in order to earn money to pay for said living arrangements. Since I don't have anything really good today, it is Boilermakings time:

2010 basketball recruiting class reaches top 10 status - Boilerdowd talked about this yesterday, but it is very good to have a talented class coming in right on the heels of our "Baby Boilers" 2007 class. I don't even think it is bad news that the class is only 4th in the Big Ten. If our goal is to ultimately win national championships and improve our profile that way we need steady, strong competition to improve ourselves against. That is exactly what the Big Ten is becoming.

This class also confirms my "Perfect Storm" prediction for next year. Robbie, E'Twaun, and JaJuan (if they all stay) will be the nucleus of teachers backed up by extremely talented underclassmen at all the right positions. They can teach the new guys, thus improving the program for the future. All the depth and experience will have us as a favorite to win the national title as well. To me, every piece of the 2010-11 team fits together perfectly on paper from the starters to the bench guys, especially if JaJuan stays. So please, don't listen to those NBA guys, JaJuan.

Women's basketball releases full schedule - The ladies lose a lot from a team that nearly made the Final Four, but they always seem to turn it on in the Big Ten. Here is the full schedule as the ladies try to stay as an NCAA team.

Another 1-7 Big Ten finish predicted - Over the pylon is the latest blog to claim Purdue will beat Indiana and only Indiana in Big Ten play. That's okay, as we have seen worse. I am not exactly Lou Holtz, but I guarantee we will win more than one conference game this season. I know we can squeeze out six wins and a bowl bid, so that is my hope for the year. Finally, I will go on record as saying we finally beat a ranked team again. If it happens against Oregon or Notre Dame, even better, as that would change the perception of the entire season before we even play a conference game.

Only a few days left to sign up for the Hammer & Rails league - I thank everyone who has signed up for this league. If someone would like to volunteer as a commissioner it would be most appreciated. We need two more teams now before the September 1st automatic draft. In this league we have to use players from two conferences, so I chose the Big Ten and Pac 10 to give us a Rose Bowl feel.

Four football players awarded a scholarship for 2009 - This was a common practice under coach tiller, but I am glad that it is continuing under coach Hope. Four former walk-ons were officially placed on scholarship this season. Wide receiver Adam Wolf, quarterback Chris Bennett, long snapper Andy Huffman, and fullback Jarrod Shaw will each be on scholarship. Shaw is the only non-senior of the group.

This is a great honor for a bunch of hard working guys. Bennett has run the scout team for years, but actually saw some game action for three plays at Michigan State last season when Curtis Painter, Joey Elliott, and eventually Justin Siller were all hurt. Wolf has been an unsung special teams star, playing in 34 games with 17 tackles and a fumble recovery. He is also the designer of O.N.E. Huffman has actually been the starting long snapper for the last three seasons before an elbow injury sent him to the sidelines. That same injury will likely cost him at least part of this year.

Purdue sports for 2009-10 officially kick off this weekend - The first official sporting events of the season are now just two days away. Women's soccer begins its season Friday at #7 Texas A&M. Volleyball also has its Mortar Board Premier this weekend, hosting Ball State (Friday), Coastal Carolina, and Dayton (both Saturday) at the IAF. The Dayton game has a familiar flavor, as former Purdue player Brittany Dildine is now an assistant coach there. After reaching the NCAA sweet 16 last season, Purdue carries a top 20 ranking into this year, though Penn State is a 2-time defending national champ and didn't even drop a set last year.

Indiana sells away 2010 home game - This is the second time that Indiana has sold a home game against Penn State to an NFL team. The 2000 game against the Nittany Lions was played in the now-demolished RCA Dome, but at least that was in the same state as Indiana's campus. There is not a single team in the Big Ten other than the Hoosiers that would do this for a conference game.

It does touch on a thought I have had for some time, however, what if Purdue agreed to a two year contract to aply either Notre Dame or Indiana in the new Lucas Oil Stadium in Indy? With Indiana, it would put the Old Oaken Bucket game in the spotlight of the state's biggest city. A two year deal guarantees one team doesn't get shafted by losing a home game in the long run, either. Kansas and Missouri have struck a similar deal, playing in Aarowhead Stadium each of the past two years.

With Notre Dame, a two year deal would be critical so we don't give up the leverage of a home game. We can't afford to lose our status in that rivalry, as we're still on par with Michigan, Michigan State, and USC in terms of not being relegated to one of their neutral site games. The precedent is there as well, as the first ever football game in the RCA Dome back in 1984 was a Purdue victory over Notre Dame. 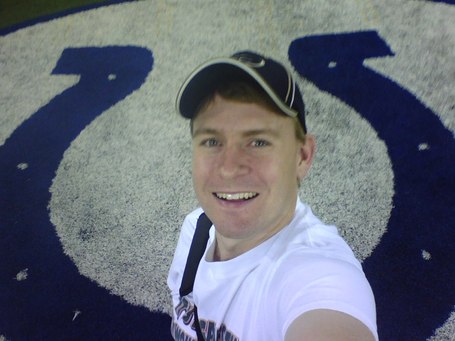 Future site of a Purdue game?

Lucas Oil Stadium has not made a concerted effort to host many college games outside of the annual Circle City Classic (a game between two historically black colleges put on every year by the Indiana Black Expo). So far, they have had the same policy that the RCA Dome had in terms of having the state's largest schools play there: that is, they don't have a policy. Purdue, Indiana, and Notre Dame each only played there once in its 24 year existence.

I would love to see Purdue play a game at Lucas Oil. Unfortunately, many dates are taken throughout the year. Since the Colts are now the official sponsor of the IHSAA state football tournament, Lucas Oil is now often used for high school games on Friday nights and Saturdays. It is common to have a double header played on Fridays, then have an entire high school conference play 4-5 games there on Saturday in succession. This Saturday incoming recruit Charles Torwudzo and Brownsburg will play Noblesville at Lucas Oil. Next Saturday night Joe Gilliam and Southport will take on Pike at Lucas Oil. Lucas Oil Stadium is already booked for four Saturdays this fall, and my bet is that will only increase with time. As a result, I predict the Purdue basketball team will play at Lucas Oil Stadium before the football team does.

By the way, the first opportunity to do so is this season's Final Four.

Hammer & Rails T-shirts are in: I finally got my own Defense Lives Here shirt and it looks awesome! The link to order is to your left on the main page. 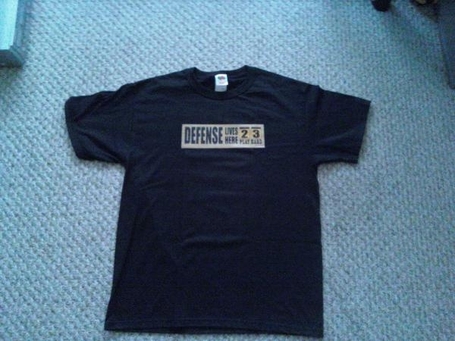