Share All sharing options for: Two weeks to go

In two weeks, we will know what we are dealing with. Toledo is a team that, in my opinion, we should beat easily. They are the weakest team on the schedule. If we struggle with them or even lose, we should expect a down year. A comfortable win allows us to breathe a sigh of relief and think that maybe, just maybe, a win is possible at Oregon. I still think a win over the Ducks is quite possible, but for now we must concern ourselves with Toledo.

I haven't had many comments about practice so far because most of you read GBI. They have kept us up to date on what is going on, so I don't want to be a source of regurgitating their information. If the Indianapolis Star bothered to recognize there are two major universities in this state rather than one we might have more coverage, but apparently they don't realize it is the same distance to Bloomington as it is to West Lafayette. In this case, I miss Michael Pointer.

Still, what news from practice we have heard has been very encouraging. Some of this is mere inference based on what we have heard (or have not heard) but I think things are shaping up. 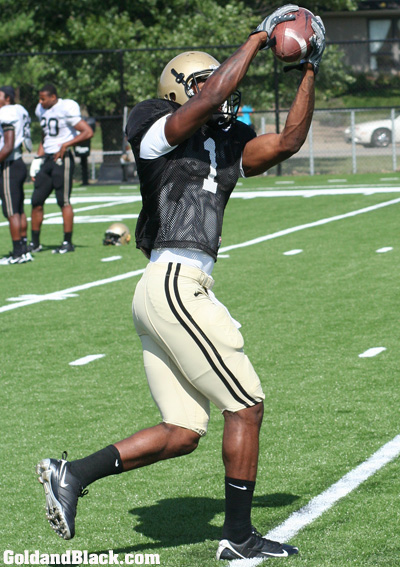 Look! A receiver wearing #1 that isn't catching a knife in the chest or a pellet in the eye!

Multiple receivers are developing - To be honest, I was a little concerned when only Antavian Edison was being mentioned as a positive among all our new receivers. Over time, however, it is good to see names like Gary bush, Cortez Smith, and Keith Carlos reach the land of glowing positives. With each name that makes the list our offense will grow more and more potent. The drawback right now is that we have virtually no size. Xavier Reese at 6'3" is the tallest while Keith Smith at 226 pounds has the most bulk. Because of his bulk, I wouldn't mind moving Keith Smith outside and putting one of the speedier guys in the slot.

The tight ends also seem to be getting involved more and more in the offense. Think about this for a moment: What has made our last three NFL quarterbacks even better? A good tight end. Drew Brees had Tim Stratton. Kyle Orton had Charles Davis. Curtis Painter had Dustin Keller. These guys open up our offense underneath, and that element was missing last year. I don't think we'll have Kyle Adams, Colton McKey, Jeff Lindsey, or Jeff Panfil make us forget Keller in week one, but this position should be a huge upgrade over last season. We also still have Jordan Brewer coming next year and Gabe Holmes if he can get eligible.

On Holmes, I would like to see him get officially cleared just so he can stay and practice on campus. He is probably going to redshirt anyway at this point. If he doesn't get cleared he has some options and can still play four years as long as he is 80% of the way to his degree at the end of his third season (fourth academically).

The silence of Caleb TerBush - Coach Hope spoke before camp that TerBush would see plenty of playing time this year along with Elliott. This concerned me greatly, as I am not a fan of quarterback platoons. Look what happened in 2002 when we played musical quarterbacks between Kirsch and Orton. I want TerBush to be ready to play if we need him, but I would feel much better if we had Elliott designated as "the Man" from game one. I think we are starting to see that too.

I think Elliott will be ready. The press has some doubts, but we doubted Billy Dicken back in 1997. With the running game we have I don't think we need Elliott to throw for 400 yards per game. We just need a guy that will be a leader in the huddle and one that doesn't make mistakes. Elliott wants to go into coaching once his career is over. He views this season as kind of an audition for that role, and I like that a lot. I have talked often how we have missed a certain leadership quality since the departure of Drew Brees. Curtis Painter and Kyle Orton were great players of course, but I always felt they missed that extra leadership element that set Brees apart. I think Elliott has some of that, while Rob Henry behind him has it a whole lot more. 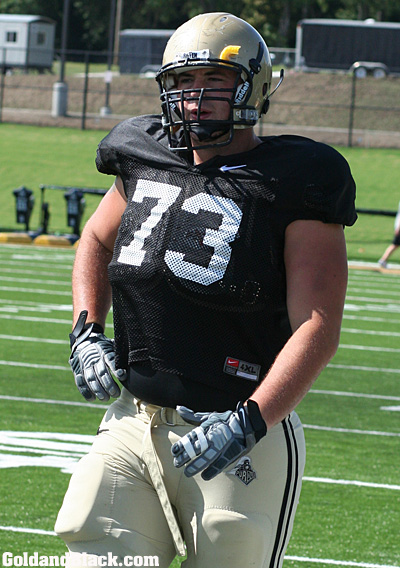 If I were Joey Elliott or one of our running backs I would be very happy to see this large gentleman protecting me.

Defensive developments - This is the area that I think is going to make a major difference this year. All three areas of the defense have improved and we're actually developing a little depth at all three as well. Everyone just assumes we will struggle as we have the past several years, but I beg to differ. Mike Neal seems to be a difference maker at defensive tackle. Even the press is raving about him, while Kawann Short next to him gives us two very good interior defensive linemen. Ryan Kerrigan, Nickaro Golding, Nick Mondek, and even a very raw Kevin Pamphile have been mentioned as contributors along the line. Again, this is an issue of multiple names being mentioned, much like at wide receiver. If we can play seven guys on the D-line that will make everybody fresher late in games. The most exciting thing is that among all the defensive linemen in practice, only two (Keyon Brown and Neal) are seniors. All that depth is going to be here for awhile. 11 defensive linemen are either true or redshirt freshmen too.

At linebacker, I honestly don't know what it is like to have five solid linebackers at once. All five could be back next year as well if Jason Werner pursues a sixth year of eligibility because of his injuries. Dwayne Beckford and Antwon Higgs continue to get mentioned as valuable pieces. They also get to learn slowly since Joe Holland, Werner, and Chris Carlino are entrenched as starters. I really like Carlino late last season. Starting at middle linebacker as a true freshman in the Big Ten takes some talent. Establishing all five of these guys this year will only help next season when we get guys like Gilliam, Lee, and Lucas.

Finally, we knew the defensive backs were going to be a strength, but I think some of their minor injury issues have been a blessing. It is great to have four seniors back there, but with virtually no proven experience behind them we are only a couple of injuries away from being back in 2006. Josh Johnson's development here has been huge. Getting more from Charlton Williams and Josh McKinley, who each played a bit in 2007, will help provide depth this year and ease the transition into next year.

As good as the defense is going to be this season, it has the potential to be fantastic in 2010 and 2011. For the first time since probably 2003 we have a defense that I feel can get a critical stop and win a game or two for us that we have no business winning when the offense struggles. They have depth we have been missing, and it comes at all three levels.That game or two could mean the difference this year between a bowl game and no bowl game.

Let's talk injuries and the schedule

Naturally, you are going to have some injuries in fall practice. Fortunately, we haven't lost anybody to anything major yet. The most significant injury is to Colton McKey, who will probably miss a few games at the start of the season. Eric Hedstrom is also battling a shoulder problem, but we knew that already. Look everywhere else in college football. Virginia Tech suffered a huge blow when it lost Darren Evans to a torn ACL. Wisconsin, a huge swing game on our schedule, is battling injuries and can't settle on a quarterback, either. Other teams in our own conference are having similar issues.

This is the time of year when it is better to have a team coming together and answering questions rather than answering new ones. That is what I think we are doing. Because of that, I think we are going to shock someone, be it Oregon or Notre Dame, in the non-conference season. I love this team's attitude so far. Danny Hope has them believing they can beat anyone, anywhere. If they are keeping score you might as well go out and win the damn thing.

Are we going to win the Big Ten this year? Highly unlikely. I do like that we trade off two proven, solid teams (Iowa and Penn State) for two teams that are talented, but very shaky (Illinois and Wisconsin). That is a plus in my book. I also like the challenging non-conference schedule and how it will prepare us for those games. I want people to underestimate us. We'll let them know, beginning in two weeks, how wrong they are.