Know thy Opponent takeover: The Only Colors

Share All sharing options for: Know thy Opponent takeover: The Only Colors

Pete from the noted Michigan State blog The Only Colors agreed to stop by this week and answer some questions about Michigan State. The Spartans present our most difficult test within the conference outside of Ohio State, yet last year's game was unexpectedly close. Here is what Pete had to say about the Spartans. 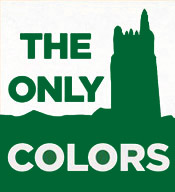 The Only Colors is the only SBNation source for Michigan State.

Hammer & Rails: Michigan State must replace its two most important offensive positions in quarterback and running back. Who is coming in and why are they better than Hoyer and Ringer?

The Only Colors: Roll a die.  Throw darts at a dartboard.  Read tea leaves. Any one of those methods would be a valid guess, as Dantonio has let little slip about who will be the starting QB, and any one of seven players could see time at RB.  Redshirt sophomores Kirk Cousins and Keith Nichol are both in the running for the QB spot, and both of them bring different traits to the position.  In short, Cousins has the game experience from last year, but Nichol's the transfer from Oklahoma with the cannon arm and 4.5ish speed.  Both of them will be better than Hoyer in making big plays that might help the Spartans steal a game or two this season; the flip side of this coin is that few were better than Hoyer at knowing when to take a sack.  Whichever QB starts will likely cost the Spartans a game this year due to an ill-advised decision, but that's the price a team pays when breaking in a new quarterback.

As for running back, Dantonio's looking to settle on two starters.  The front-runners currently are redshirt sophomore Ashton Leggett (5'11", 230 lbs.) and redshirt freshman Caulton Ray (5'9", 185 lbs.).  The only reason any of these running backs might be better than Ringer is that at the end of games, they'll be fresher.  It's not as if Ringer wore down significantly in the 4th quarter last year (look at the Michigan game if you need proof), but I feel the offense might be more effective if the load is split evenly between at least two RBs.

H&R: One of the worst insults in a Big Ten rivalry is the whole Big Brother/Little Brother Michigan fans have going against you guys. What do you have to do to gain respect against the Wolverines?

TOC: The same thing any team has to do in any rivalry to gain respect - win.  I think some of the fire has been added back to the rivalry since the win last October; it's tough to remember how much it stinks to lose to your rival when you've won six years in a row.  That said, there's going to be some subset of Michigan's fan base that will never respect the Spartans.

H&R: Michigan State gets a huge break in not having to play Ohio State this year. Despite the newcomers, do the Spartans have what it takes to win the Big Ten?

TOC: No, as the offense isn't there yet.  If MSU had received this schedule in 2011, I'd say yes, as whoever the QB and RBs will be would have had a full year to take their lumps.  They'll drop a few games this year as they gain experience (most likely losses: Penn State, then Iowa, then Illinois), then have to go through a horrendous schedule (@PSU, @Iowa, @Michigan in a rivalry game) in 2011.  MSU got a few breaks to win nine games in 2008, I'm not sure if they'll receive the same breaks this year.

H&R: Defensively, this looks like a very strong team. especially with Greg Jones at linebacker. How much of a difference will that unit make for the defense as a whole since it seems to be the heart of the defense and Jones is one of the best in the country.

TOC: It's going to be the unit that could bail MSU out of some games.  The defensive line is lacking some experience (and mass for that matter, one of the DE's that might start is around 225 lbs.), thus it might fall on the linebackers to stop runs around the line of scrimmage.  As for Greg Jones, he did a stellar job stepping into the MLB role about halfway through last year.  With the experience he has at that spot now, All-American consideration isn't far fetched.

H&R: Your non-conference schedule is sneaky tough with a game at Notre Dame and two very good MAC teams in Western Michigan and Central Michigan. Do you see a stumble in any of those games, especially since you own Notre Dame Stadium?

TOC: Possibly at Notre Dame.  As good as Central is, their defense is suspect.  They gave up more than 50 points to Eastern Michigan last year, and while LeFevour is as advertised and will put up points, MSU will put up more.  Western loses all but one starter from their defense last year, MSU should also win that one.  The Notre Dame game will be tricky though.  For all of MSU's success in South Bend since the first Clinton administration, Jimmy Clausen actually looks to be a decent quarterback, and an experienced (although somewhat mediocre last year) Notre Dame defense will give the Spartan offense their first real test.  I think Michigan State will win against Notre Dame, but I'm only 60% sure of it.