It has been pretty quiet around here since practice started. I haven't done many updates because I know many of you readers also frequent my friends over at Boiled Sports. Boilerdowd has been on it with updates from the first few days of practice, so there is little need to repeat what he has said along with the few updates GBI gives us. Today is media day, however, and it shows that I am an idiot.

See, I had an opportunity to be there today as a card-carrying member of the media thanks to all you readers making this blog a serious force covering Purdue. Unfortunately, e-mail and time have conspired to prevent my attendance. My main e-mail account for the blog is through excite, and I have only been able to successfully access that account twice in the last two days. This is also preventing me from accessing a Q&A with the Michigan State blog The Only Colors. I also completely lost track of time and didn't realize media day was today until, well, yesterday at around 9pm.

Woops. So much for taking advantage of that. 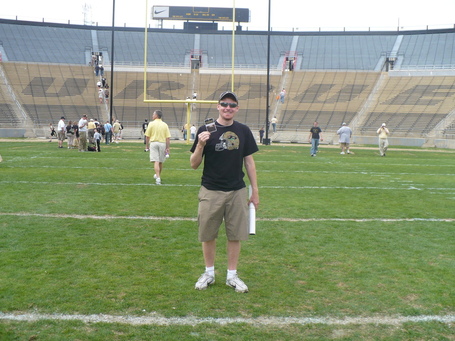 Proof that the calendar feature on Outlook is a very good thing. You won't be seeing such pictures from today's Media Day, and I am an idiot for it.

So I offer my apologies to you, the reader, for my largesse. I will not make the same mistake when it comes to Basketball media day.

Speaking of tight budgets, it is looking like the long-awaited Oregon game trip is not going to happen. The only way I was going to be able to do it with Mrs. T-Mill is that I have a free companion ticket through Delta Airlines that I must use by March 31. Since I must book 30 days in advance, today is basically the deadline for that. Delta, however, is not cooperating with good prices or flight times. The only options I have are to fly into Portland for about $350 or fly into Seattle and drive down for $250. The Mrs. and I have done some planning we see that for the same amount of time we can rent a car for half as much and fly into Miami for just $200 and see her ‘Canes play Oklahoma on October 3rd. Hotels, surprisingly, are incredibly cheap for that weekend in Miami as well. Plus, we might be able to stay with a friend anyway. Even if we have to get a hotel, the savings of at least $200 is pretty nice right now for the same length of trip. It means I have to give up Purdue-Oregon as well as our homecoming game, but when Miami is your backup plan you can never go wrong.

So getting back to fall practice for a moment. Here is what I like:

Antavian Edison - We knew we needed at least one of the Florida Freshmen to become a force on offense, and it looks like Edison is in the lead there. He doesn't have much size as a receiver, but we don't have much size at receiver period. We don't have a single receiver over 6'2". Keith Smith, Cortez Smith, and Tommie Thomas are the only players even that tall. We're going to have to get by on cunning and guile instead of simple physical dominance at this position.

Jeff Panfil - Two years ago I thought Panfil would compete for this year's starting quarterback job. He has since moved to tight end, and apparently he is making some noise with Colton McKey being out. We do have plenty of size at tight end, so maybe Panfil, Jeff Lindsey, and Kyle Adams can be our big receivers. If we're going to run more anyway it is nice to have their size on the field. Could Purdue be head toward some two tight end sets?

A focus on running - I am really encouraged by this. Something that has been very bothersome is our tendency in big games to completely abandon the running game. This year we don't have a choice. In my opinion, five of our best "skill" players are all at running back with Jaycen Taylor, Al-Terek McBurse, Dan Dierking, Frank Halliburton, and Ralph Bolden. There is depth and talent here to spare, while the passing game, our hallmark of the past 12 years, appears to be lacking. Let's run it then. Coach Hope talked about using Halliburton more, so why not. We have to learn that "I-Formation" and "two tight end sets" are not bad words. If we can run better out of the shotgun, so be it. The offensive change to take advantage of Kirsch in 2005 would have worked very well had the defense not been absolutely terrible during the six game losing streak. Instead, we abandoned it.

Was it the offense's fault the defense couldn't get one stop against Minnesota? How about slowing down Notre Dame that year? I always feel Kirsch got an unfair shake that season when the defense was putrid and more of a reason we lost six straight games. Personally, I think we would benefit greatly this year with a return to that style of offense. Line up Bolden and Taylor in the backfield with Elliott in the shotgun. What do we really have to lose? It's not like we're expected to be a dark horse national title contender like in 2005. This year's defense could actually be good unlike that team.

Names on the jersies? - This is a bit of a surprise coming out of media day. What coach Hope wants, coach Hope gets, I guess. I've grown used to not having the names there, and I follow the team so closely I essentially memorize the roster anyway.

Offensive line play - To me, this is the most critical area of our success. If you have a good offensive line in college football it can win six games by default. Just look at Ken Dorsey's career. The dude is a stick and has struggled in the NFL (because of poor offensive lines) but at Miami he lost only twice as a starter. The biggest reason: He had an offensive line that made sure no one came within five yards of touching him. If we had a great offensive line I could stand in the backfield and chuck the ball around. The coaches are raving about Ken Plue's improvement, but from a sheer stability standpoint we should be better. Remember, we didn't have a healthy line even in spring practice before the 2008 season. We used 7 different starting combos. Health has not been much of a factor this year, including in the spring. This group got to gel together in the spring, and will make us a much better football team in three and a half weeks.

Rob Henry - I am thrilled with the news he may not redshirt. He was there all summer, and I would not be shocked at all if played at least a little this year. Right now he is my favorite to be the starter next year. Yes, I am man-crushing for reasons other than the fact he wearing #15.

Guys getting praised for effort and work ethic - This comes from years of being undersized in sports I play. I am the only person I know that has had a church basketball league scouting report read: "No one works harder than Travis..." That's the polite way to say I suck, but I try really hard out there. So far we have had a number of guys praised for their work ethic, which is really a good thing. Unfortunately, we need results to come from that work ethic.

Wide receiver - As much as I am excited about the running game, we are Purdue. We make our offense run via the pass. I was fully expecting a couple of guys to come in and wow people on the first few days of practice, but so far Edison is the only one. We knew this was going to be a concern though. As long as we can balance the offense and have enough of a passing game from Valentin, Smith, Edison, and the tight ends we cans till be successful. I have no problems with controlling the clock on the ground, playing solid defense, and winning games 17-14. To me, that is our most successful formula this year. The days of throwing down 50 without breaking a sweat are over. As long as we win the game I don't care if we score 5 or 50. All that matters is having more points than the other team at the end of the day.

Facebook - Finally, we have a great shame. Yes, I have joined facebook. And yes, I became in addict in just two days.