Share All sharing options for: Bring it on! Men's basketball releases non-conference schedule

While I enjoyed my experience as a season ticket holder for the first time since 2002, the sheer cost in addition to football tickets had me debating this year. Football is easy get tickets for. It is always on Saturday and you always know, sometimes years in advance, which Saturdays. There are only seven games as well. Basketball is different. Counting the two exhibitions, there were 20 home games last season. Many of those were on weeknights, which meant a mad dash after work to West Lafayette where I still often missed tipoff. It is hard to get excited for the likes of Arkansas-Pine Bluff and Eastern Michigan, but those go by the wayside this year.

Simply put, this is an ambitious schedule worthy of a team that many feel can contend for the national title. It has its cupcakes, but for the most part we will be more than tested before getting into Big Ten play. Let's look at it game-by-game:

11/3 California of Pennsylvania and 11/9 Kentucky Wesleyan - I think we should have scheduled Indiana of Pennsylvania two years ago when we had no home game against IU. Playing the same school last year would have probably given us a better strength of schedule than the Hoosiers too. Both of these games are tune-ups and should be easy wins, but we still need to take them seriously. Kentucky Wesleyan is a Division II power that went to that level's title game for six consecutive years from 1998-2003. They have eight Division II national titles and were 24-8 last season. We should take these games seriously. Michigan State lost to a Division II team last season at the Breslin Center. California of Pennsylvania is cool because they are nicknamed the Vulcans. Can Robbie Hummel survive the Vulcan Neck Pinch with his ailing back?

11/13 Cal State Northridge - The first official game of the season isn't going to be the cakewalk people expect. The Matadors made their second ever NCAA Tournament appearance last season after winning the Big West regular season and tournament titles. They then scared the crap out of #2 seed Memphis, leading by three with less than 10 minutes left, before the Tigers pulled away for an 81-70 win. The Matadors lose their top three scorers from last year's 17-14 team though. Only one of their 17 wins last season came against a team from outside the state of California.

11/20-11/23 Paradise Jam Tournament U.S. Virgin Islands - Only the first game should be an easy one. We open this tournament with a game against South Dakota State. The Jackrabbits were 13-20 last season, and 7-11 in the Summit League. A first round upset of #2 seed Oral Roberts in the Summit League Tournament was the highlight of their first full season in Division I. They should be better, as their top three scorers, each averaging better than 12 per game, return.

The second round will be against either Boston College or St. Joseph's. BC was a very young team last season that we beat in New York for our best non-conference victory. They should be even better this year after a surprising run in the ACC sent them to the NCAA Tournament. St. Joseph's was 17-15.

The most likely team we will face in the final is Tennessee. They were 21-13, 10-6 in a pretty awful SEC last year. They did play in one of the more exciting NCAA Tournament games, losing 77-75 to Oklahoma State on a basket with 7.2 seconds left. Tyler Smith and Wayne Chism give them a very good one-two senior scoring punch. The Vols are also known for their hot starts to the season. I would say we are the favored team in the tournament, but we have the toughest road by getting Boston College in the semi-finals. DePaul, Northern Iowa, and East Carolina are in Tennessee's half of the bracket.

11/28 Central Michigan - We just can't get away from the Chips. Even the football team could have another rematch with them if we get 6 wins and head back to Detroit for the Motor City Bowl. The basketball Chips have done very little since they sent Chris Kaman to the NBA. They were 12-19 last year and lost to Ball State in the MAC Tournament. This should be an easy home win. It's position is welcome, as the back-to-back of Oklahoma and Duke was brutal last year. I believe former Boiler Nate Minnoy is also still with Central Michigan. This would mark his first game at Mackey Arena since leaving after a promising freshman year.

12/1 Wake Forest - The Demon Deacons might be able to sit down by this point after the spanking Cleveland State gave them in the NCAA Tournament. They were 24-7 last year, but this was after a 16-0 start had them as the #1 team in the nation. They were only 8-7 down the stretch and got blown out by Miami in ACC play. They lost Jeff Teague to the NBA, but as a top ACC team they will reload. They also lost James Johnson, knocking them out of ESPN's pre-season top 25. We need this game, and this is the year the Big Ten finally wins the challenge.

12/5 Ball State - The Cardinals should continue to get better, but this is a game against a MAC team at home. There is no excuse for losing this game.

12/9 Valparaiso - The same is true for the Crusaders. Their women's team beat our last season and the ladies still went to the Elite 8, but this is an in-state team that was under .500 last year. They might battle Butler in the Horizon League, but they are the third best team in that league at best.

12/12 at Alabama - This is a very interesting game. The last time we played the Tide was my junior year in a double-overtime loss at Mackey Arena. That was in the third round of the NIT. Alabama was a middle of the pack team in the SEC last season, finishing 18-14. They went out and got Anthony Grant from Virginia Commonwealth as their new coach. Getting a win at a BCS level school outside of the conference would be a nice bonus.

12/19 at Wooden Tradition, Conseco Fieldhouse - The opponent hasn't been announced, but it should be a good one since the Wooden Tradition is always a good matchup. We have played Arizona, Butler, Louisville, Xavier, Cincinnati, Stanford, and Davidson in this event. Expect a similar level of opponent, possibly Butler again. If someone had some real stones they would have us face Notre Dame in this event, as the Irish played in it in 2000 and 2005. 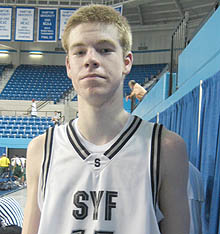 12/22 SIU-Edwardsville - We played this team a few years ago when they were still Division II, but they are in the process of moving up to Division I. This was a 10-20 team last year as an independent transitional D-I member. That equals an easy win in my book.

1/1 West Virginia - This is easily the best game of the non-conference schedule and maybe the best home game of the season. The Mountaineers are a consensus top 10 team with Devin Ebanks, who spurned IU for West Virginia. We got knocked out by one of the best Big East teams in the NCAA's, so it is a great litmus test to face one of their best in 2009-10. If we win this game, we will compete for a #1 seed in March.

I love this schedule. If you want to be the best you have to play the best. The in-state teams we are playing are a couple of the improving teams in-state, while that Wooden Tradition game opens itself for a game against Notre Dame or Butler. Ball State, Central Michigan, Valparaiso, SIU-Edwardsville, South Dakota State, and Cal State Northridge all should be wins, but they are teams that can challenge us too. Boston College, Tennessee, West Virginia, Wake Forest, and Alabama are all teams that could play in the NCAA's as well. If we are somehow 12-0 after this slate we will be a no doubt top 5 team nationally, and maybe even #1 overall. The best thing is that 12-0 is a realistic goal.

This should toughen us up for what will be a brutal Big Ten slate. Once we get into the conference every game, short of Indiana and Iowa, will be a challenge. Almost everyone will be better than last season. We will be well prepared to face everyone after this slate.