Know thy Opponent takeover: We Will Always Have Tempe

Share All sharing options for: Know thy Opponent takeover: We Will Always Have Tempe

Whenever I work on something related to Ohio State I could have a virtual roundtable of bloggers. Eleven Warriors, Buckeye Battlecry, and the Men of the Scarlet and Gray have all made appearances here in the past. This time I went with SBNation's new Ohio State blog, We Will Always Have Tempe for some questions about this year's Buckeye team. It is hard to beleive, but the four-time defending Big Ten champs are a little afraid of us this year. He also thinks the SEC needs to sack up and come play outside of the south. Here is what Sam had to say about the Buckeyes: 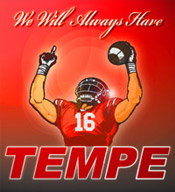 Don't talk to Mrs. T-Mill about Tempe. Trust me on this...

Hammer & Rails: Purdue finished 9th in the conference last year, won only four games, and lost almost all of its offense. Ohio State has won at least a share of the Big Ten each of the last four years and has played in a BCS bowl in all but one year since the 2002 season. Is there really anything you have to fear from this game?

We Will Always HAve Tempe: Definitely. For two straight seasons, Purdue has held Ohio State to it's third lowest point total of the season, allowing 23 points in '07 and just 16 in '08. Lambast Joe Tiller's defenses all you want; his guys knew how to defend Ohio State. Jim Tressel's relatively conservative mentality creates a razor-thin margin of error; all Purdue really has to do to win - provided it again holds Ohio State's offense to its third lowest point output of the season, or something similar - is force turnovers.

H&R: Despite everything mentioned in question 1, the Purdue-Ohio State series has been very competitive since 2000. What do you see as the biggest reason for this?

WWAHT: For some reason, I think Ohio State overlooks Purdue. They aren't a big rival, and, for this decade at least, they haven't competed for Big Ten titles consistently. Another factor many may not realize: the decline of the Ohio State offensive line from "very good" to "game-changingly inconsistent" has kept games close, especially given Purdue's history of producing talented pass rushers like Anthony Spencer and Ryan Kerrigan.

H&R: How much do you expect Terrelle Pryor to open things up offensively despite losing Beanie Wells?

WWAHT: Honestly, until his passing improves - and it looks like it has, merely going from the spring game - nothing much will change. Even that is contingent upon improvement in the play of the offensive line. Basically, expect more read option, bubble screens, and misdirection. The pony package should begin to take greater shape this season as well. It won't quite be 2006, but it won't be the three-downs-and-a-cloud-of-sack that 2008 was.

H&R: Ohio State consistently just reloads on defense. who are your next big stars on that side of the ball?

WWAHT: Tyler Moeller. Remember this name. The guy's a mighty mite safety/linebacker hybrid with the quicks to chase down Terrelle Pryor in the open field and the strength to take down the Big Ten's best power backs. Another name: Jermale Hines. He started making a name for himself last year, but in 2010, he's going to be a full-time starter in place of the departed Kurt Coleman. Jim Tressel knows this, and he's going to groom him for the spot by sticking him in in nickel packages. He's sorta big for a safety, but he's got the requisite speed and hits like a ton of bricks.

H&R: What is like to have a season that ends in a BCS bowl be a disappointment? We don't know what that is like at Purdue.

WWAHT: Well, when it's 2008, and you're picked in the top 3 in most pre-season polls, it's hard to be completely satisfied when you lose at home to an above average Penn State squad and you get dumptrucked by a USC team that was supposed to be rebuilding on offense. It just isn't easy to see legends like Beanie Wells, James Laurinaitis, Malcolm Jenkins, and Marcus Freeman go out like that. I know 110 other teams would trade spots with us at any moment, but you just have to wonder when Tressel is going to put it all together again. Personally, I think he will sometime in the next three years. The Texas game showed he still has a bit of ingenuity left. But the two years before that? When you're so close to a title, and you fall so far short, it's just tough.

Let me try to put it into perspective. You're dominating your conference. You're pumping athletes into the NFL left and right. But because of two blowouts at the end of the season to very good, championship-caliber teams, all your accompishments are for nothing; you play in a bad conference, your players are "overrated", and you don't belong within 50 miles of a BCS bowl forever and ever amen. Losing to those teams isn't a disappointment; the reaction from the college football world at large is. Add onto that the fact that the only way to shut them up is to beat an SEC team, and that SEC teams rarely schedule home-and-homes outside of their region, and it only gets more frustrating.

BONUS QUESTION: I ask this of every Ohio State blog since my wife is a Miami Hurricane, and it is especially true given your name. Was the call on Glenn Sharpe in the 2003 Fiesta Bowl really pass interference? And be honest! I only ask because I was the unfortunate one that had to stop her from celebrating and tell her there was a flag. She nearly broke my TV.

WWAHT: Okay, removing the Scarlet-tinted glasses.... yes. It was the right call. I'm not the only one who thinks so. This site: http://buckeyefansonly.com/notcalled.html, as jankity and low-brow as it is, is accurate. I wouldn't show it to your wife though, unless you want a new computer.

H&R: Thanks for stopping by, Sam. That was some excellent analysis, especially of that infamous Fiesta Bowl. I am convinced, though my wife keeps saying Miami has six national championships instead of five.

On a final note today, I wanted to draw attention to something I recently received in my e-mail. If you are familiar with the concept of couch surfing there is a new service out there called Gameday Housing for people that love to follow their teams on the road. Property owners list their homes and interested parties can rent them out for a gameday weekend close to their game of choice. It is still in it infancy, but it is worth a look if you're going on the road anywhere this year. I'm not getting paid a dime to promote this. I just thought it was interesting.