The final entry of vacation week takes us to the halfway point of the season. I view the Minnesota game as our most important road game of the season. We have not won a true road game since beating Minnesota two years ago in the Metrodome (Though the 2007 Motor City Bowl was a virtual home game for CMU). That streak will likely be intact coming into this game. If you give us wins in four of our home games, which is reasonable, we have to win at least two road games in order to make a bowl. Since we always struggle at Michigan and Wisconsin is a toss-up at best, that means we have to get this game in Minneapolis.

I don't think it is a stretch, either. The Gophers were ranked last year, but I feel it is a game we would have won if not for Curtis Painter's injury. The Gophers won 17-6 on a day where we showed virtually no offense. Both of Minnesota's touchdowns were set up by two huge plays, both of which could have been stopped. The first was a 71 yard pass that we tipped and missed tackles on. That set up a 4 yard run by Adam Weber. The second was a 39 yard run by Weber in the fourth quarter that set up the final score. That was really the only contribution from the Minnesota offense on the day. Kory Sheets' only lost fumble of the year, inside the Minnesota 20, sealed the game for Minnesota.

We were that close to Minnesota last year, and that was with a player at quarterback who had barely played in a collegiate game to that point. That gives me hope we can win a huge swing game on our schedule.

Last Season for the Golden Gophers:

It was an up and down year for the Gophers, as evidenced by the fact we are the last team they have beaten. Even though we finished 4-8, we have more wins (2) in our last five games than the Gophers, who finished 2008 on a five game losing streak. For any Gopher fans that stop by I know the reason why. There was a very obnoxious Minnesota fan sitting a row in front of me at last season's game. When I visited Minnesota for the 2005 game we were treated to some of the most polite fans in the Big Ten. This guy, however, was loud, rude, convinced the Gophers were going to Pasadena, and actually cheered when Curtis Painter got hurt. I think the five game losing streak is karmic retribution because of that.

Minnesota did start the year 7-1, but it was against one of the weakest schedules in the country. Florida Atlantic and Montana State were the only wins over teams with winning records. The 27-20 win at Illinois was probably the best of the bunch, as it later prevented the Illini from going to a bowl. Minnesota finished the year by not scoring much against a bad Michigan defense, then not scoring at all in a 55-0 blowout against Iowa.

Minnesota's non-conference schedule this season is much tougher than in years past. They open at Syracuse before hosting Air Force, California, and South Dakota State. Going on the road to play a BCS conference team, even Syracuse, is always brave. Cal will be one of the best teams in the Pac-10, while Air Force is a solid team that has won at least 8 games each of the past two years.

As stated in my interview earlier this week with the Daily Gopher, Minnesota is changing its offensive strategy a bit this year. Glen Mason's teams were known for having a power running game that sent backs like Marion Barber and Lawrence Maroney to the NFL. It is quite a change, as the Gophers were not a strong running team in 2008. They barely ran for more than 100 yards per game as a team, and sophomore Deleon Eskridge was the leading rusher with only 678 yards and seven TD's. He represented Minnesota's youth movement very well, as 13 players on Minnesota's offensive two-deeps were freshmen or sophomores. Fellow sophomore Shady Salamon contributed 181 yards and three touchdowns on the ground. Unfortunately for him, 122 of those yards came in the first four games of the season.

Minnesota will still have some elements of its spread attack because of junior quarterback Adam Weber. Weber was a threat on the ground last year, amassing 233 yards and four touchdowns. He led Minnesota in rushing during our game and had a first quarter touchdown run. As a passer, his touchdowns dropped from 24 to 15 last year, but He cut his interceptions down from 19 to 8. As a two year starter he has already thrown for more than 5,600 yards. In 2007 he ran for more than 6000 yards and five scores, but that was on a 1-11 Minnesota team that couldn't stop anyone defensively. In terms of career starts, Weber is one of the most experienced quarterbacks in the Big Ten. Five of his interceptions last season came during the five game losing streak, so he still has a bit to learn.

Helping Weber put up such good numbers is all-Big Ten receiver Eric Decker. Decker (84-1,074-7) had a fantastic first half of last season, but was limited down the stretch with an injury. He had just 10 catches in the regular season after the Purdue game, but healed enough for a fantastic bowl performance against Kansas. In that game he caught eight passes for 149 yards and a score. It is no wonder that Minnesota' offense struggled once he got hurt. The next high receiver, tight end Jack Simmons, had 36 catches for 331 yards and two scores. Essentially, Decker was Minnesota's passing game. He was recently drafted in the 27th round of the Major League Baseball draft, and appeared to be fine during Minnesota's baseball season. Ben Kuznia (31-310-0) is the only other receiver with decent returning numbers. He missed the spring game with an injury, depriving Minnesota of its top two receivers.

Minnesota's offensive line will be the key to its season as they try to run a little bit of everything on offense. It should be interesting as the Gophers return everyone on the two deeps from a line that gave up 30 sacks. New offensive coordinator Jed Fisch is calling on these guys to cut down on the sacks, as The Daily Gopher mentioned in its spring preview.

Play defense to the end, boys

Two years ago it was, "what defense?" Minnesota didn't hold a single opponent under 21 points in 2007 and all but two cracked 30. That includes 1-AA North Dakota State. 2008 was different as Indiana, Purdue, and Florida Atlantic were each held to a touchdown or less. That is quite an improvement when all three teams topped 40 points in victories over the Gophers in 2007. On the other hand, Minnesota gave up 97 points in its final two games against Iowa and Kansas.

Though Minnesota improved, its defense was not great in 2008. This only shows how poor our offense was. Cornerback Traye Simmons may be the best returning player in the secondary. He had four interceptions last year to lead the team and added 62 tackles. He'll be joined in the secondary by Kim Royston, a safety transfer from Wisconsin, Kyle Theret and Marcus Sherels. Theret had 78 tackles and three interceptions as a safety. Sherels added two more picks. With experience, this secondary should see even more opportunities for interceptions.

In terms of production, linebacker Lee Campbell led the team with 80 tackles. He added four sacks, showing his ability to get into the backfield. Minnesota runs a tradition 4-3 scheme most of the time. Nate Triplett and Simoni Lawrence should be quite productive at the other two positions. All three linebackers will be seniors in 2009. Lawrence had 66 tackles with four sacks and an interception, making him and Campbell quite a duo. They will be relied on heavily as new defensive coordinator Kevin Cosgrove takes over.

Minnesota's biggest loss on defense was defensive end Willie VanDeSteeg. He was one of the best defensive ends in the conference last year with 10.5 sacks and 19 tackles for loss. Cedric McKinley (3 sacks) will need to step up his production, while redshirt freshman Anthony Jacobs is likely to start on the other end. Eric Small and Garrett Brown will man the tackle spots. The pair combined for five sacks last season, but were somewhat suspect against the run. The Gophers gave up almost 150 yards per game on the ground, so line play will be critical.

If the Gophers lose a lot of close games it could be because they are breaking both a new kicker and a new punter. Gone are Justin Kucek and Joel Monroe, leaving a void at both specialty positions. Dan Orseske comes in as a true freshman expected to take over the placekicking duties. He will compete with junior Eric Ellestad and sophomore David Schwerman. Ellestad did kick in the spring game and performed well. Blake Haudan will likely take over for his senior season as the punter. Both coverage units, which were pretty good, will likely suffer until clear starters emerge.

Sherels will likely stay as the primary punt returner, and he is a good one that averaged almost 12 yards per return last season. He will also serve as the main kick returner.

The largest intangible will be one that a Big Ten team has not had since 1960 when Indiana's Memorial Stadium opened. The opening of TCF Bank Stadium returns Minnesota football to campus away from the Metrodome, where the Gophers played since 1982. There is little doubt that the Gophers intend to reclaim a home field advantage they have not had in over a quarter century. The fans are more than excited that they will once again be like the rest of the conference with outdoor football. Fun Fact: Purdue played int eh highest attended game ever at Minnesota's old Memorial Stadium. The 1961 Purdue-Minnesota game had 66,284 fans in attendance. 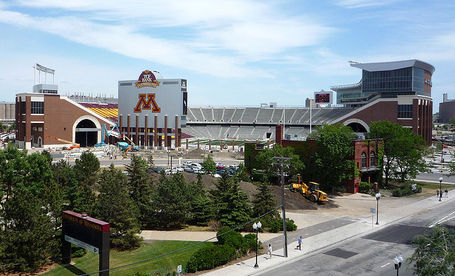 TCF Bank Stadium is a gorgeous, if small by Big Ten standards, Stadium.

The change in both coordinators is also a bit of a puzzling move. No one is really sure what to expect from an offense that was worse last year even though its record was better. Defensively, Minnesota can't be worse than it was in 2007. It's experience alone is reason to expect improvement.

If we are healthy going into this game I expect to win because we will actually have an experienced quarterback this time. One had to be there last season to appreciate how ugly our offense was in the Minnesota game. Considering what Siller did the following week against Michigan it is like the coaching staff didn't even bother to prepare for the possibility he might play against Minnesota.

Minnesota's recruiting has been significantly better, but they still are about a year away from seriously contending in the Big Ten. They had some health issues in spring ball and were missing their top two receivers. The bottom line is that we need to take advantage and grab a win against a team that has nearly as many question marks as we do. You cannot predict how the shift in offensive philosophy will go, but it does help they have an experienced quarterback running things.

I still see this as a game we absolutely have to win. We probably won't be favored in each of the following five games, so if we can get this one to start 4-2 it will greatly enhance our bowl chances. We need to stick with the running game, which I think will be working well, and use our experienced secondary to shut down their passing game. This is the ultimate game to win with defense, and we proved last year we can stop them. Finally, this is the final Purdue game before I turn 30 on October 12th. I'd love the present of a win at the end of my 20's.  Purdue 20, Minnesota 17