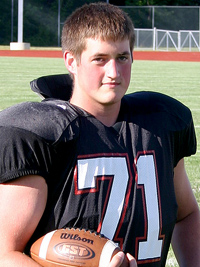 Danny Hope landed his sixth commit for the 2010 class by getting a solid verbal from Josh Davis, a 6-6, 270-pound defensive tackle from Plain City, OH.

Davis is a defensive tackle, yet was inexplicably photographed holding a football as though he is a running back. Josh is a Scorpio and enjoys his PS3, chocolate milkshakes and hand jobs in the back of his mother's Chevy Tahoe.

Actually that whole last sentence isn't true. At least, not officially. But let's be honest -- who among us doesn't appreciate a good chocolate milkshake followed by a rub and a tug?

I did enjoy this opening line from the story:

Ohio defensive tackle Josh Davis didn't want to be thinking about college when he was still attending high school.

Yes, indeed. What a drag.