The next year in our countdown is going to be a very short one to recap. Though it happened before most of us were born, it is arguably the most successful year in Purdue history on a national scale. It is a year in which Purdue accomplished something few, if any schools have ever done: winning a national championship in both football and basketball during the same school year. We have to go all the way back to the days of John Wooden and 1931-32 for this one, but it was a year of unprecedented success for the Boilers. 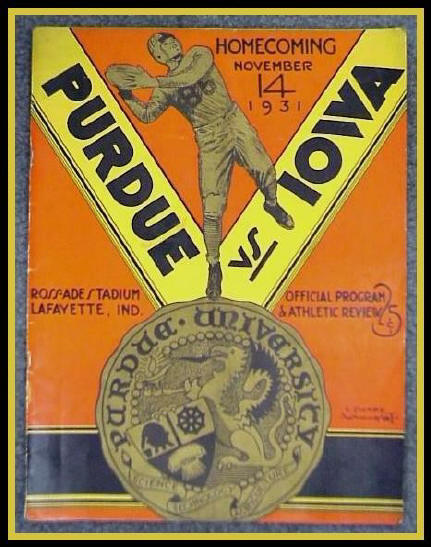 Purdue? National champs in football? No, it's not October 2004.

In 1931 the Big Ten wasn't in the same incarnation as it is today. The inclusion of Michigan State and Penn State was decades away, while the University of Chicago was a powerhouse in the conference.  Teams played only an abbreviated conference schedule, so it appears that the conference's fear of having everyone play everyone else goes back at least to the 30's. In something else you'll never see in this day and age, Purdue began the year with a doubleheader.

On October 3, 1931 Purdue began its season by playing both Western Reserve and Coe. The Boilers won each game in a shutout, 28-0 and 19-0, respectively. Conference play started the next week as Purdue opened Big Ten play with a 7-0 win over Illinois. All three games were home games, and they set the stage for one of the most dominant home seasons in school history. Not only did Purdue go undefeated at home in 1931, it surrendered only six points at Ross-Ade Stadium. Good luck seeing that happen again.

A three game road trip followed, and it began with the only defeat of the year. Purdue lost 21-14 to Wisconsin in Madison. The 21 points was by far the most Purdue surrendered in a game, as the Boilers only gave up 18 points in the other nine games combined. Purdue won the final two games of the road trip 13-6 over Carnegie Tech and 14-6 over Chicago.

Purdue gave up its final points of the year in a 49-6 thrashing of Centenary in its first home game after the road trip. Wins over Iowa (22-0) and at Indiana (19-0) set up one of the biggest games anywhere during the 1931 college football season. Undefeated Northwestern was the final game on the schedule. The Wildcats came in with a 7-0-1 record only blemished by a scoreless tie with Notre Dame. The game was played at a neutral site in Chicago, and it wasn't even a scheduled game. It was set up as a postseason charity game and ended up being the de facto Big Ten championship game. Purdue stopped Consensus All-American halfback Ernest "Pug" Rentner and won 7-0 to finish 9-1 on the year. They also grabbed a share of their third Big Ten Conference Championship.

It ended up being a little more, too. College football historian Parke Davis conducted historical research in 1933 to retroactively award national championships to what he deemed were the best teams for most of the years between 1869 and 1932. Considering that only two years had passed since the 1931 season, His assessment of Purdue during that year could be considered fairly accurate. He awarded the Boilermakers a national championship for their efforts in 1931. It remains the only year Purdue can lay any kind of a claim to a football national championship. In one of the first ever #1 vs. #2 postseason matchups USC won the more accepted national title, finishing 10-1 with a victory over Tulane in the Rose Bowl. Pittsburgh allegedly shared the Parke Davis title that year with Pittsburgh (8-1).

Purdue outscored its opponents 192-39, and more than half of those points were given up in the loss to a 5-4-1 Wisconsin team. Six of the ten games ended in a shutout for Purdue. Center Charles Miller and End Paul Moss were named to a variety of All-America teams for Purdue's efforts that year.

John Wooden is on the Mt. Rushmore of college basketball. There is absolutely no argument about this. With 10 national championships as a coach (including a never-to-be matched seven in a row) he would be there already. As a player, however, he was just as good. He was a 3-time All-American and lead Purdue to its only basketball national title in 1932. Much of his coaching prowess is due to the great Ward "Piggy" Lambert, who coached the Boilers from 1918-46. Lambert won 11 Big Ten titles and 228 Big Ten games as coach of Purdue. The 11 Big Ten titles are by far the most of any coach in conference history. 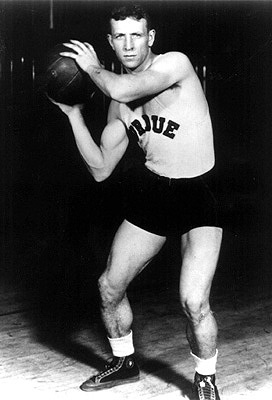 John Wooden is simply, The Man.

As mentioned above though, John Wooden was the heart and soul of the 1931-32 team. As an All-American in the previous two seasons Wooden lead Purdue to a 25-7 record. Wooden was perhaps the first Citizen Pain and the reason that Purdue is known as such a tough, scrappy, defensive-minded team today. One of his nicknames from his playing days was "the Indiana Rubber Man" for his tendency to dive on the floor at all times.

Wooden led Purdue to a 17-1 record in 1931-32, losing only at Illinois 28-21 on January 9th. The Boilers later avenged that loss by thumping the Illini in West Lafayette 34-19. Few other teams even came close to beating Purdue as Marquette (26-23) and Wisconsin (28-21) were the only wins Purdue had by less than 10 points. Contrary to what our friends to the south believe, the NCAA officially recognizes the Helms Athletic Foundation championships before 1939 as national championships. Purdue was unanimously selected as the 1932 national champion, and Wooden was named the Helms national player of the year.

Wooden averaged a solid 12.2 points per game for the year, which was solid in a much lower scoring era. He would go on to play professionally for a number of years before beginning the great collegiate coaching career ever. The rare double he helped accomplish with both football and basketball national championships in the same season is also unlikely to ever be repeated at Purdue.

It was hard enough to find information about football and basketball that far back. There were rarely NCAA championships in much of anything at the time, as both basketball and football had independent championships. There were no women's sports at all, and sports like baseball and Wrestling didn't accomplish anything really noteworthy. This year clearly stands out, however, because of the double national titles.

Taking that into perspective, it is still quite an accomplishment for a program like Purdue. We only have two NCAA team national titles as a school: 1961 men's golf and 1999 women's basketball. If other schools can supplement their totals with these types of titles, then so can we.