We should really be afraid of our next opponent on the schedule. Northern Illinois is one of the better MAC teams, yet it is a critical game for our bowl chances in 2009. Going into the Northern Illinois game most people expect us to be 1-1. Anything less and we can forget a bowl game. It is a must-have game because we're expected to lose to Notre Dame the following week. We absolutely have to have at least a 2-2 finish in non-conference play to have any hope of a 6-6 finish and possible bowl bid.

Our fans have become spoiled by facing the MAC, however. Sure, we've been tested by a very good central Michigan team and we got shocked at home by Bowling Green in 2003, but we're used to blowing out MAC team du jour. It may happen against Toledo, but it will not happen against Northern Illinois. As Mike said in last week's Q&A, this is a focused team that will be looking at us as a chance to grab a pelt for themselves from a BCS conference.

Last season for the Huskies:

Last year was a bowl year for Northern Illinois, though it is most likely because of a glut of bowls on the calendar. The Huskies finished just 6-6 on the year, but grabbed a bid to play in the Independence Bowl against Louisiana Tech. They did well in what was a virtual home game for Tech, but lost 17-10 after both teams played a virtually scoreless second half. It was Tech's first bowl win since 1977.

That is not to say the Huskies were a bad team last year. They had plenty of moments that could have vastly improved their record. Four of the six regular season losses were by less than a touchdown. They were not against your typical run of the mill MAC opponents either. They led Minnesota with 30 seconds left before a late touchdown saved the Gophers. They lost by three the following week at a very good Western Michigan team that would later beat Illinois. They went into SEC country and played Tennessee to a 13-9 game without their starting quarterback. Finally, they had a 33-30 overtime loss to Central Michigan, which has been the most consistent MAC team in recent years. They may not have had a notable win, but they know how to play good teams tough.

As far as this year's schedule looks, they are not afraid to play BCS teams. The Huskies open the season in a night game at Wisconsin. In addition to coming to Purdue, they have non-conference home games against Western Illinois and Idaho. Toledo and Central Michigan make appearances later in the MAC schedule, as does Ball State.

As Mike said, second year coach Jerry Kill likes to run a spread offense that is weighted towards running the football. This is where the game against Oregon should be an advantage. I am sure that Northern Illinois is good at this offense, but few teams in the country are better at running out of the spread than Oregon. If we're fortunate enough to beat the Ducks, or at least hold our own defensively against their offense, it should be a good sign for the Northern Illinois game. 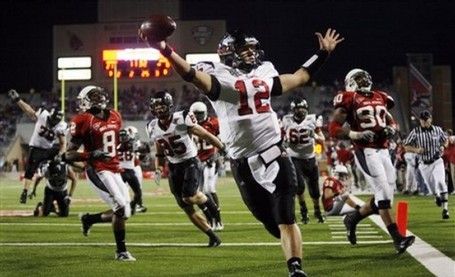 Chandler Harnish is a dual threat quarterback in the mold of many others, but NIU would not mind him to be more like Dan Lefevour. We have seen enough of Lefevour

Quarterback Chandler Harnish will be returning to run the show. He was a redshirt freshman last season and performed admirably in ten starts. He didn't play in the Tennessee game, and was the starter from day 1 against Minnesota. In a way, we're probably lucky to be facing him now instead of in two years when he becomes the experienced senior MAC quarterback the NFL desperately wants. He threw for just over 1,500 yards with eight TD"s and nine interceptions during his rookie season. More importantly, he finished as the Huskies leading rusher with 539 yards and four touchdowns on the ground. He's not quite the dual threat that Oregon's Jeremiah Moseli is, but he is still good.

Joining him in the ground attack will be sophomore Me'co Brown (510 yards, 2 TD's) and junior Chad Spann (429 yards, 8 TD's). Spann is built a little bit like former Northern Illinois back Garrett Wolfe, who ran for more than 5,000 yards and is now on the Chicago Bears roster. Spann is the quicker of the two backs, but Brown is pretty quick as well. Look for Brown and Spann to run more as Northern Illinois tries to keep Chandler from running as much.

The Huskies didn't have a great passing attack last year, so they will need more of one in order to free up the running game. Marcus Perez was the leading receiver with only 34 catches for 480 yards and two TD's, but he was lost to graduation. The same is true for number two receiver Matt Simon (24-377-2). That leaves Reed Cunningham (22-252-3), a 6'5" target, as the team's top returning receiver. Nathan Palmer (12-278-2) should be a quality slot receiver for them, but he was injured for a good portion of last year. We also need to look out for Justin Anderson. Anderson was a 1,200 yard receiver with eight touchdowns in 2007, but a knee injury caused him to miss all of last season. Our secondary needs to take away the passing game and make the Huskies as one dimensional as possible. We should be able to do it with the experience we have versus their lack of experience.

The offensive line is one of the best in MAC. Eddie Adamski was a third-team all-Mac selection last season at center and makes few mistakes. Left guard Jason Onyebuagu joined him on the third team last year and has Big Ten size at 6'2", 305 pounds. Trevor Olsen, Panan Tense, and Kevin Skatrund were all starters last year at one point, making this line incredibly experienced. They should give Harnish plenty of time to throw, but they are not particularly skilled at run blocking. Our defensive line will have to cause havoc in the running game at the same time our secondary is shutting down the receivers. If both things happen, the Northern Illinois offense will struggle.

This was by far the strength of the team last year, but as Mike said, they lose seven starters. One of those starters was defensive end Larry English who was the 16th overall pick in the NFL draft. English was a terror in the backfield with eight sacks and 16 tackles for loss, but he is the problem of the AFC West now with the Chargers. Brandon Bice was almost as good on the other end of the line with 6.5 sacks and 12 tackles for loss. He returns for his senior season as the top pass rusher and will attempt to replicate English's numbers. Mike Krause and D.J. Pirkle look to be the starting tackles, but they weren't especially good at getting into the backfield and disrupting offenses. If our offensive line can play well we should be able to create holes for the running game.

Pat Schiller, Alex Kube, and Cory Hanson are the starting linebackers that have a decent amount of experience. Kube was the team's leading tackler in 2007 with 111 and has moved all around the defense from safety to linebacker. He also had seven tackles for loss a season ago. Hanson had six tackles for loss as well, so they can get in the backfield if necessary.

The secondary is not one that caused turnovers, which is good for our inexperienced receivers. Last season Northern Illinois had only six interceptions, and only one of those came from a projected starter in the back four. Schiller and Hanson each had one as linebackers, while cornerback Patrick George had just one. The team did have 13 fumble recoveries, however, so we will need to hold on to the ball once we have it. Safety David Bryant led the team in tackles with 83 and has played all over the field on both sides of the ball in his career. He forced three of those fumbles and simply likes to hit people. This secondary is young and though they have talent, it will likely be the weakest secondary we face in the first half of the season.

Mike Salerno is one of the best kickers in the MAC and maybe in the country. The kid has range with a long of 52 last year and he hit on 18 of 24 total field goal attempts. He was also a perfect 34 of 34 on PAT's and had 16 touchbacks on kickoffs. This helped the Huskies to have a very good kick coverage team that allowed only 23 yards per return. Salerno may punt as well, as they must find a new punter. They gave up 10.7 yards per punt return last season and a touchdown with an experienced punter.

The return game will likely be handled by Me'co Brown on both sides. He averaged 21.4 yards on kick returns and 7.9 yards on punt returns a season ago.

Northern Illinois is not going to be afraid of us. If anything, they are looking at this game as a chance to grab another win over a BCS program. They came agonizingly close in two games last year, and they will have already cut their teeth against Wisconsin. The Quad ranks them as 80th overall, which is still ahead of us in that countdown. Their coach is in just his second season, but he has them believing they can beat anyone.

Still, this will be a young team especially on defense. It is another chance for our passing game to get going with our own inexperience issues. As a senior laden team last year they finished under .500 and lost three of there last four games.

This is a must win for us. I was a little scared of them at first, but I don't think their offense is strong enough to move the ball regularly against our experienced defense. Our secondary should dominate their receivers and shut down the passing game. If we can get into the backfield a few times my only fear is that Harnish can create something out of nothing with his legs. How many times have we struggled with that? Of course, with this game coming immediately after Oregon we should be used to their offensive style.

Defensively, I think this will be a very good team in time, but they are awfully young. It is a perfect chance for our offense to mature and show we can actually score this year. Let's face it, if we can't move the ball and score against Northern Illinois and an awful Toledo defense we're not going to suddenly figure it out in Big Ten play.

This is a must win game for us. If we lose to Toledo, it could be the only game standing between us and a winless season. As good as Northern Illinois is on paper they aren't as good as at least eight other teams in the Big Ten. Let them get their big upset at Wisconsin (thus improving our chances of winning in Madison). For now, I think we win a game that is close for a half, but we pull away in the end. Purdue 34, Northern Illinois 21