This series hasn't turned out as well as I have expected, but there is still some promise in it. Our next year features the last time that Purdue was one of the most feared teams in the land, as well as the Boilers only appearance in basketball's national title game. It lacks somewhat simply because there were no women's sports at the time and the rest of the teams were horrible, but the football and basketball accomplishments at the same time were likely only matched by the #4 year on this list. 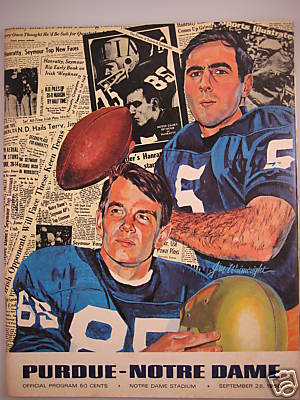 The 1968 football season for Purdue began at number one. For the only time in Purdue's football history dating back to 1887, Purdue started the season ranked #1 in the Associated Press Poll. It is not a surprise, either. Quarterback Mike Phipps was returning for his junior season. He had begun his career the year before by upsetting defending national champ Notre Dame in his first career start. Running back Leroy Keyes also returned, as it was also the only time that Purdue featured not one, but two legitimate Heisman Trophy candidate on the same team. Simply put, Purdue was loaded. They were also the defending Big Ten champion.

What many people forget is that Purdue did not win the Big Ten when it appeared in the 1967 Rose Bowl after the 1966. At the time, the Big Ten had a rule that teams could not make consecutive appearances in Pasadena. Michigan State actually won the Big Ten in 1966, but the Spartans had also won in 1965 to go to Pasadena for the 1966 game. As a result, Purdue's second place finish to Michigan State was good enough to go. The Boilers were even better in 1967, but ineligible to play in the 1968 Rose Bowl. They were ineligible for any bowl for that matter, as the Big Ten Conference allowed just one team to play in a bowl game, that being the Rose Bowl.

Phipps had Purdue ranked in the top 10 the entire year in 1967, but a midseason loss at home to Oregon State ruined hopes of a perfect campaign. Purdue headed to Bloomington having already secured at least a share of the Big Ten title, but Indiana and Minnesota lurked a game back. Indiana shocked the Boilers 19-14 to secure a 3-way tie with Purdue and Minnesota for the conference crown. It also sent the Hoosiers to Pasadena for their only Rose Bowl appearance. If not for a 33-7 loss at Minnesota the week before, Indiana would have gone to Pasadena undefeated. Other than Purdue's 2000 crown, it is the last time all three teams won the Big Ten.

That made expectations incredibly high going into 1968. Keyes, who also played cornerback and was a returner on both kicks and punts, was an All-American talent. Phipps gave fans a glimpse of what passing was all about in an era of dominant running games. Purdue started the year with a 44-6 thrashing of Virginia at Ross-Ade. Next up was the only game in Purdue history that Purdue has ever played in as part of a #1 vs. #2 matchup (and one of just 40 such games ever).

In probably the most storied game of the Purdue-Notre Dame football rivalry the Boilers dominated the #2 Irish in South Bend for a 37-22 victory. This could easily be labeled as the greatest win in Purdue's football history. 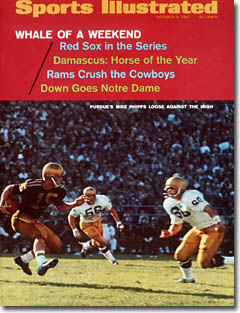 This is the only time Purdue football has ever been featured on the cover of Sports Illustrated.

This game was a great battle between Phipps and Notre Dame's Joe Theismann. The game didn't disappoint for Phipps. The quarterback was 16 for 24 on the day for 194 yards. His top target was Bob Dillingham, who had 147 yards and two scores on 11 catches. Keyes had a huge day as well, running for two touchdowns and passing for a third. Purdue's defense got in on the act by recovering an astounding six fumbles as the Boilers jumped out to a 23-7 lead late in the first half. The win was Phipps' second against the Irish, and the next season he would become the first college quarterback to defeat Notre Dame three times in a career. Considering that freshmen were ineligible at the time, it meant he was a perfect 3 for 3 against the Irish.

Purdue's #1 ranked season continued the next week with a 43-6 thrashing of Northwestern at home. Unfortunately, the bid for an unbeaten season came to an end at Ohio State in week four. The #4 Buckeyes shutout Purdue 13-0 and eventually went on to win the Big Ten, the Rose Bowl, and the 1968 National title. Purdue fell to #5 in the polls, but reeled off win against Wake Forest (28-27), Iowa (44-14), and Illinois (35-7) at home to move to 6-1. A 27-13 loss at Minnesota ended any hopes of a Big Ten title even if Ohio State stumbled, but Purdue finished the year by beating Michigan State 9-0 and avenging the previous year's loss to Indiana 38-35.

Because only the Big Ten champion went to a bowl game, there was no bowl for one of Purdue's best teams ever. Post-season honors were still numerous for the Boilers following an 8-2 season. Keyes finished as runner-up for the Heisman Trophy to USC's O.J. Simpson. Considering what has happened to O.J. since, it is probably a good thing Leroy didn't win. Phipps missed a pair of games with an ankle injury, but he still finished in the top ten in the Heisman voting. He would be the runner-up for the award in 1969. Both players were consensus First-team All-Americans. Middle Guard Chuck Kyle joined them on the All-America team. For Keyes, it was the second consecutive year he was a first-team All-American, and he was eventually selected third overall in the 1969 NFL draft by the Eagles. His pro career was a disappointment, but his Purdue career is unmatched by any player in the history of the program.

So what did the basketball team do as an encore? It would be hard to follow up such an act by the football team, but the basketball team matched them by staying in contention for the national championship all season long. Indiana schoolboy hero Rick Mount led a high scoring Purdue offense tot eh national championship game in Purdue's first ever NCAA Tournament appearance. Unfortunately, the Boilers ran into UCLA's dynasty right when they had one of the greatest college players ever: Lew Alcindor.

Going into the 1968-69 season, Purdue had not won a Big Ten championship in 29 years. It is the longest such drought in school history by the team that owns the most regular season titles. Junior Rick Mount gave Purdue reason to hope that drought would end with his performance the previous season. He was named first-team All-Big Ten and second team All-American in averaging 28.4 points per game. It was his first season of eligibility, and he opened Mackey Arena with a bang by scoring 28 points against #1 UCLA. Purdue lost that game 73-71, but it was a statement for a young Boiler team that would finish 15-9. Seniors Billy Keller and Herm Gilliam gave Purdue quite a nucleus to build around, and it paid early dividends. 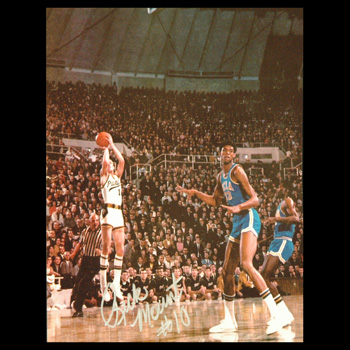 I think I would give 10 years off of my life to have Rick Mount's jump shot.

Purdue began the season ranked tenth, but lost the season opener at #1UCLA 94-82. The Boilers then reeled off five straight wins before losing to Arizona State in the Sun Devil classic. That was just a stopover before heading out to Hawaii for the Rainbow Classic. Purdue went t2-1 on the islands, beating Arizona and Hawaii but losing 78-74 to Columbia. That loss to Columbia was the last loss for a long time. Purdue steamrolled through the Big Ten with a 13-1 record, losing only at Ohio State. They easily won the conference title and automatic bid to the NCAA Tournament. In the final game of the regular season Purdue set a school record for points in a single game by stomping Indiana 120-76 in Mackey Arena.

Making their first ever appearance in the NCAA Tournament, Purdue received a first round bye as the Big Ten champ. Purdue won the Mideast Region with a 92-72 win over Miami of Ohio and a 75-73 win over Marquette. Once at the Final Four, Purdue beat North Carolina 92-65 to set up a rematch with John Wooden's Bruins. Unfortunately, Alcindor and John Vallely were too much to handle. Vallely had 29 points and Alcindor added 37 in his final collegiate game as UCLA cruised to a 92-72 win. In the victory, UCLA became the first (and so far only) team to win three consecutive NCAA basketball championships. They would go on to win seven in a row, and Alcindor won his third straight Most Outstanding Player Award for the Tournament.

Mount won the Big Ten Player of the Year Award and was named a First Team All-American. He would repeat both feats as a senior the following season. He averaged better than 33 points per game and had 28 in the championship game against UCLA. His 36 against North Carolina in the national semifinal helped him become the Tournament's leader in total points scored with 122. He would go on to be an All-American once again in 1970 and set a school record for point sin a game with 61 against Iowa. Research indicates that if the 3-point line had existed in that 61 point game Mount would have had 74. Mount is still Purdue's all-time leading scorer with 2,323 points and continues to hold numerous other scoring records. What's more impressive is that he was not a dominant post player that took many high percentage shots. He was simply a guard that could just shoot the lights out of the gym. He basically was the type of player that, if he could see the basket, there was a good chance he was hitting the shot.

As a team, Purdue led the nation in scoring at 94.9 points per game. 27 individual or team school records were set on the year. In any other year Purdue likely would have won the NCAA title hands down, but we had the unfortunate circumstance of having our best year in school history while UCLA was the dominant team in the sport. During UCLA's run of seven straight titles, everyone else was essentially playing for second place.

The football and basketball accomplishments during the 1968-69 school year are far and away the best Purdue had to offer in athletics during that season. The baseball team was awful, finishing 9-20 with a 7-11 record in Big Ten play. Purdue numerous Big Ten champions in Men's track and field, but it was only good enough for a 3rd place finish at the Big Ten meet. I tried to see if Wrestling provided anything, but Purdue was a putrid 0-15 during the 1968-69 wrestling season.

Thank goodness for football and basketball.