Share All sharing options for: The Best Year in Purdue Sports History #6 1979-80

It's good to be back after a few days of running all over the state. With the baseball team bowing out of the Big Ten Tournament on Friday that pretty much ended the athletic year until football gets going in the spring. I know there are a few track athletes still competing in the NCAA championships, but those don't occur until mid-June. Olympian in the javelin Kara Patterson is one of the favorites there for Purdue.

Before getting back into the countdown of the Greatest Years in Purdue Sports History I have two items of note:

This is the earliest year on the countdown that actually occurred in my lifetime. Naturally, being born in October of 1979 I don't have a lot of first hand memories of this year. It was a good year though as football had a great season that nearly resulted in a Big Ten title. It is also the most recent Final Four appearance for the basketball team.

Mark Herrmann has already been profiled twice in this countdown for both our #10 and #8 ranked years, but he makes another appearance here with a great 1979 season. That year still stands as the only season in Purdue football history with double-digit wins. Because of that, it is very hard to see how the Boilers didn't end up in Pasadena. 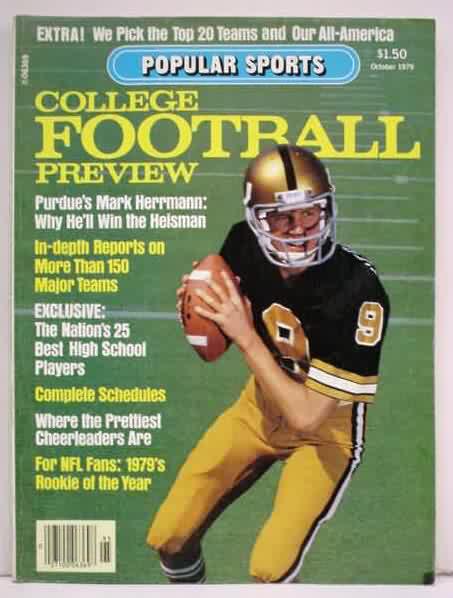 A Heisman for a Purdue player? That's unpossible!

Coming off a 9-2-1 1978 season with a bowl win, hopes were high for Purdue. College Football preview magazines even predicted a Heisman Trophy for Herrmann. Purdue began the year with a 41-20 victory over a Wisconsin team that had them their only tie a year earlier. Next was a trip to the Rose Bowl... to play UCLA. It was hoped to be the first of two games played in Pasadena for the Boilers that year, but it ended up being a disappointing trip. As usually happens when Purdue goes to the west coast, Purdue struggled in a 31-21 loss to a UCLA team that would finish the year 5-6.

Purdue returned home after that trip with two good home games against Notre Dame and Oregon before getting back into conference play. The Boilers beat the Irish 28-22 for their first Shillelagh victory since 1974. It was also Purdue's first win over Notre Dame in West Lafayette in 10 years. The Oregon game ended up being a defensive battle, but Purdue prevailed in the first ever meeting between the schools 13-7.

At this point Purdue was 3-1, but road woes would continue when Purdue traveled to the Twin Cities to face Minnesota. The Gophers, who would finish 4-6-1, upset the favored Boilers 31-14. The loss was doubly crippling as Purdue did not play Ohio State that season, meaning they wouldn't get a chance at handing the Buckeyes a conference loss. As it was, Ohio State took an undefeated season to Pasadena before a 17-16 loss to USC cost them the national title. Considering that both Purdue losses came to teams that finished with losing records, one has to wonder what might have been if Purdue had beaten UCLA and Minnesota. For the record, Ohio State also beat both UCLA and Minnesota that season.

With the Rose Bowl dreams gone, Herrmann and the Purdue offense went on a tear. The Boilers won seven straight games to close the season, beating Illinois, Michigan State, Northwestern, Iowa, Michigan, and Indiana to finish in second place in the Big Ten. A 27-22 win over Tennessee on New Year's Eve in the Bluebonnet Bowl gave the Boilers their first (and so far only) 10-win season.

In addition to some pretty good numbers for Herrmann, Purdue was led by eventual second round NFL draft pick Keena Turner in 1979. At the time, Turner set a record for tackles for loss in a career (58). His mark of 23 tackles for loss on the year was second only to his 1978 mark of 25. He was named first-team all-Big Ten for the second year in a row, and eventually won four Super Bowl rings with the San Francisco 49ers. He is the only Purdue player that has four NFL championships in his pro career. Only he and Matt Light have played in four Super Bowls from Purdue (Light winning three of them).

Tight End Dave Young had a stellar season as Herrmann's favorite target. Young hauled in 10 of Herrmann's 17 touchdown passes on the year. That would set up an All-American campaign for him the following season.

It is hard to believe, but before the 1979-80 basketball season Purdue had only been to the NCAA Tournament one time. For all the Big Ten championships the program has only two came between 1940 and 1980. For most of that era only the conference champion went to the NCAA Tournament. In 1979 Michigan State got the nod over Purdue, and as discussed in that year's article the Boilers went to the NIT. Because of that and what was returning, Purdue began the season in the top 12 and was a favorite for the Final Four.

Purdue did not disappoint in the non-conference season, either. Only a 1-point loss at Kentucky and five point loss to #5 Syracuse prevented a perfect non-conference record. In conference play Purdue didn't fare nearly as well. The defending champs finished just 11-7 in the Big Ten, but it was still good enough to barely squeeze into the NCAA field. Purdue likely benefited from the fact the field expanded to 48 teams that season from 40.

Purdue began the tournament as a lowly regarded #6 seed, but it didn't matter. They beat LaSalle (90-82) and St. John's (87-72) to reach the Sweet 16. Once there, they faced off against #2 seed Indiana. The rivals had split the season series that year with each inning on their home floor, but Purdue remembered the previous season's 1-point NIT Final loss to the Hoosiers. This was back when Isaiah Thomas was actually useful to the game of basketball instead of destroying everything in his path. Thomas had 30 points, but Keith Edmonson and Drake Morris each had 20 for Purdue as the Boilers upset Indiana 76-69 in the only meeting between the two schools to ever occur in the NCAA Tournament.

From there, Purdue beat Duke 68-60 to advance tot heir second ever Final Four. It was just down the road in Indianapolis at Market Square Arena too, ensuring a partisan crowd for Purdue. Unfortuantely, that is where the run ended. As happened in Purdue's only other Final Four season, Purdue lost 67-62 to UCLA. Purdue did crush Iowa 75-58 for third place, but it still wasn't a title as our friends to the south are quick to point out.

Joe Barry Carroll was named as a Consensus All-American for that season. Only Glenn Robinson has been so honored since. Carroll went on to be the #1 overall draft pick in the 1980 NBA draft, but was arguably a bust in the pros. He only played in 19 playoff games over an 11 year career, but he did averaged 17.7 points and 7.7 rebounds per game. He is still Purdue's all-time leader in rebounds, blocks, and is second in points.

Women's Field Hockey - Back when Purdue had a team, Field Hockey had it's best success during this period. The women repeated as Big Ten champs in the fall of 1979, but were pretty much never heard from again.

Women's Volleyball - I missed this during the 1980-81 entry, but Purdue won the first of two straight Big Ten volleyball titles during the 1979 season. It was the first year that volleyball was deemed a revenue sport at Purdue, making it the first revenue program in the school's history. Miriam Quinnett and JoAnn Wissen became the first two female athletes in school history to receive full athletic scholarships.