Surprise Additions: Where do the new basketball recruits fit?

Share All sharing options for: Surprise Additions: Where do the new basketball recruits fit?

Purdue's 2009 basketball recruiting class became an unexpected two part act over the weekend. We already knew about Patrick Bade, Kelsey Barlow, Jeff Robinson, and D.J. Byrd. All are Indiana kids who made their decision to come to West Lafayette very early in their high school careers. In Byrd's case, I remember covering a sectional game his freshman year and there were already rumors he was all but committed then. I saw him two other times in sectional play and there is little doubt in my mind we are getting a good one.

The past couple of days have seen us pick up three news players in addition to those four. It is rare that a class grows so much well after signing day, but it is not a surprise. Dru Anthrop and Steve Loveless are both invited walk-ons, while Sandi Marcius is insurance against a possible NCAA eligibility issue with Robinson. So where do these guys fit in?

Sandi Marcius 6'10" 240 lbs, LaPorte, IN La Lumeire School - We got to Marcius late in the party, but we still won out over some decent programs according to the list on his profile. In my opinion, he is actually an upgrade over Jeff Robinson at a position of need. Losing Nemanja Calasan to graduation basically left JaJuan Johnson as our lone post presence. Robbie Hummel rarely plays with his back to the basket and Johnson still needs to work on his rebounding skills. Marcius takes care of both of those needs, and he is more likely to be ready to contribute immediately. 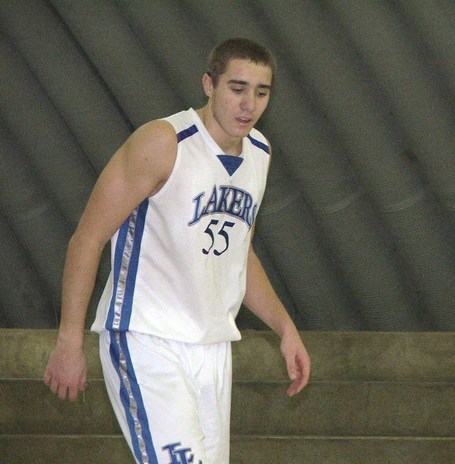 Purdue finally has a widebody in the paint.

Robinson played at Lawrence North, which was absolutely loaded with Division I talent this year. Still, there were many games in which he struggled to get off the bench. If Lawrence North was really that good they would have rolled through the tournament like they did in the Greg Oden days. Instead, they got knocked out 49-36 by a Franklin Central team they dominated 53-39 in the regular season. I'm sorry, but teams "loaded" with Division I talent should score 36 points in a half, not a full game. This is not a knock against Robinson, but I wasn't encouraged that he saw few minutes for them this season.

Marcius is a different type of player. He was the main guy for a prep school that attempted to play a more regional schedule instead of just the state of Indiana. Don't get me wrong, there is absolutely nothing wrong with the quality of basketball in this state. This was the first year that LaLumiere played a full varsity schedule though and they still went 14-5. They played most of the top teams in Northwest Indiana and acquitted themselves with some very nice wins. Gary West was 16-6 and won a Class 4A state title in 2002. LaLumiere beat them 74-64 late in the season. Against teams outside of Indiana the Lakers were 7-0 thanks to Marcius. He averaged 15 points and 15 boards for them.

I think he will compliment this team very well because he is more of a true center than JaJuan. JaJuan is not afraid to step outside and has a very nice 18-footer. JaJuan can draw defenses away from the basket while Marcius prefers to stay down low. He's a bruiser who is not afraid to do the dirty work inside. He also worked with a coach in Delray Brooks at LaLumiere that knows about winning. He has an international pedigree from his native Croatia, where many top-notch players play against older, more physical players as they develop. That only helps him make the jump to the Big Ten.

The coaches love his energy and enthusiasm. I love that he can create a genuine size mismatch if we play both him and JaJuan at the same time. He works on defense, which is something we know a little bit about too. I fully expect him to step in and even be an upgrade over Chally because he won't step out and shoot two random triples per game.

Central Catholic was 20-7 this season and won its third straight class 1A regional. For those not from Indiana, that is the smallest enrollment class in the state. Cathedral and Franklin Central are 4A. Franklin Central was undefeated at the time as well. Ironically, Central Catholic struggled the most against Loveless and his Frankfort team, losing to them twice.

Anthrop is far from afraid of playing bigger, stronger players. Part of the reason Central Catholic is one of the best 1A schools every year is that they play a schedule of much larger schools. This season alone Central Catholic took on Carmel (2nd largest school in the state), Lafayette Jeff, Franklin Central, Zionsville, McCutcheon, and Cathedral: all 4A schools. The only time they play 1A schools is when they face the three 1A members of their conference and during the state tournament. They have gone 59-20 the last three years as well, only five of those losses were to schools their size, and three were in the state tournament at the semi-state (final 4) level.

Dru Anthrop is a gamer...

This is not your typical walk-on that will struggle to get moments in blowouts. This kid is a legitimate basketball player that led his team to some impressive wins against very good competition. I saw him play once this past season. It was the championship game of the Zionsville holiday tournament. Anthrop had 18 points against a much bigger, stronger team. He showed range from beyond the 3-point arc in that game as well as the ability to drive. Zionsville won 63-61 on a last second shot, but Anthrop really impressed me with his talent and leadership ability.

The parallels to Bobby Buckets are obvious. He is a townie that is coming as a walk-on. Anthrop has a little more size and is more of a pure scorer, but both are kids that love to shoot the basketball. We won't be asking Anthrop to contribute like buckets did as a freshman, but I don't see any reason he can't provide us some depth as a shooter and give us a few minutes off the bench every night later in his career. The only reason I don't see him playing more is because of who is in front of him. How is a walk-on going to see minutes when we can likely go nine or ten deep next season?

I do like the kid though. You have to give him credit for following a dream when he turned down offers to play at some smaller schools. I also like that he has played against nearly everyone else that is coming in this year. He should have some nice chemistry with them and he can definitely be a Buckets-level contributor or more later in his career.

Steve Loveless 6'6, Frankfort (IN) High School - Loveless is another kid that is following a dream. I'm not really sure where he will fit in next season, but because of size and depth I think he is the most likely to redshirt of these three. Marcius will undoubtedly play while Anthrop could be an energy/change of pace guy off the bench. Loveless is a kid that is already eager to come to Purdue and get working in the weight room. This is good because he needs some bulk.

At 6'6" he would probably equal out to be a 2 or a 3 at the division 1 level. He is not going to immediately challenge Kramer, Barlow, Moore, Byrd, and Grant for minutes. The Journal and Courier even touts his academic credentials. The dude got a 1,500 on his SAT! Last season he averaged 23.2 points 11.9 rebounds, and 1.7 assists on the season. Much of this was against a weaker schedule than Central Catholic played, but Frankfort still had a pretty good season. The Hot Dogs were 16-7 and lost in the second round of sectionals to West Lafayette.

During the season Loveless did battle some of the state's better big men. He played well against IU-bound Derek Elston in a 60-47 loss at Tipton late in the season. Against Kokomo's Patrick Hopkins the two dueled in the paint before Kokomo won 73-71 in overtime. Of Frankfort's seven losses, six were to teams that were probably much better on paper. Only the loss to West Lafayette in the tournament (after Frankfort beat them 48-31 during the season) was a bit of a surprise, especially since it came on the Hot Dogs' home court.

Perhaps that is the one dig against Loveless, and why he wasn't a little more highly recruited. They didn't get a marquee win all year. North Central and future Purdue recruit Terone Johnson crushed Frankfort by 30. D.J. Byrd's North Montgomery team got an overtime win against them. North Montgomery and Frankfort are in the same conference, so Loveless and Byrd have battled for four years. Loveless' best wins this past season were against Anthrop and Central Catholic twice.

As I said previously, I think Loveless will need some time before we seriously see him on the floor. He did have some smaller D-1 offers, but I don't know if he has enough size yet to match the position he is going to play.

I see this entire class of six or seven guys (depending on Robinson) and I see excellent chemistry. They are a lot like the Hummel-Moore-Johnson class in that they are very familiar with each other. They played a bunch of times against each other, and the scholarship guys know that the two walk-ons are every bit as good as a scholarship player. They pushed them during their high school careers, and even if Anthrop and Loveless don't play a minute next season they will push everyone else in practice.

Marcius, Anthrop, and Loveless haven't known as they were headed to Purdue as long as Robinson, Bade, Barlow, and Byrd, but they will compliment them very well. All seven guys will absolutely erase the depth questions that plagued us during the tournament. Here is what I project as our main lineup:

Sandi Marcius (paired with JJ when we go big)

Top guys in blowouts/there if we need them:

Jeff Robinson (I'm not really convinced on him)

Steve Loveless (give him a year or two0

Obviously the starters are established, but our bench is going to be very young outside of Grant. Once those guys get experience, however, we're going to be VERY good. I am still looking towards the 2010-11 season as a National Championship season if everyone stays and Anthony Johnson, Terone Johnson, and Travis Carroll replace Kramer, Grant, and Wohlford. The lineup we have already gives us at least a punchers chance though. The addition of Marcius also gives us some insurance in case JaJuan goes pro early after his junior year. Marcius and Carroll is a good interior duo. Marcius, Carroll, and JaJuan is virtually unbeatable.