One of the busiest weekends of the spring sports schedule has come and gone, so with it we get a Super-sized Boilermakings. This one involves two new basketball players coming in, while two Purdue football players move on to the NFL.

Basketball gets Sandi Marcius, Dru Anthrop - In perhaps the biggest news of the weekend Purdue found some much needed help for JaJuan Johnson in 6'9" 240lb forward Sandi Marcius. The Croatian Sensation, as I will now call him, spent this past year playing at La Lumiere in LaPorte, IN. It is a relatively new prep school in northwest Indiana. They play a mostly IHSAA schedule, but they are not eligible for tournament play. Marcius averaged 15 points and 15 rebounds as the Lakers went 14-5. He was coached by former Mr. Basketball DelRay Brooks, who was also a member of Providence's 1987 Final four Team under Rick Pitino. The Lakers played some tough games against East Chicago and Bowman Academy, but his level of competition will jump dramatically at Purdue.

Lafayette Central Catholic guard Dru Anthrop also agreed to come to Purdue as a preferred walk-on. The parallels between him and Bobby Buckets are similar, but Anthrop may be a better overall player. He averaged 23 points, 7 rebounds and four assists this past season. He acquitted himself very well the time I saw him this past season. He had 18 points as the Knights upset Patrick Bade and Franklin Central in the morning game of the Zionsville tournament. At 6'1" he has more size than Buckets, and easily could step into the same role. The article also mentions the possibility that Frankfort's Stevie Loveless could be coming as well. It's been awhile since I have seen him, but he is another guy that could be a key practice player. I don't think he has the size to play every night in the Big Ten, but he is someone that can push our guys in practice and make everyone better.

D.J. Byrd was also named the Lafayette area player of the year by the Journal and Courier. Byrd and Bade will be playing together this summer with the Indiana All-Stars against Kentucky. Byrd also saw plenty of time against Loveless and anthrop throughout their high school careers. I like bringing in guys that have that familiarity because it gives the team an instant chemistry. It helped us immensely when Hummel, Moore, and Johnson came in, so this will only help. There has been no further word on Jeff Robinson, but I question how much he is going to contribute anyway. There were games where he couldn't even get off the bench for Lawrence North.

Alex Magee and Curtis Painter head to the NFL - It was a slightly disappointing weekend at the NFL draft for Purdue. Only Magee and Painter were drafted, while Kory Sheets, Greg Orton, Sean Sester, and Anthony Heygood will have to go the free agent route. 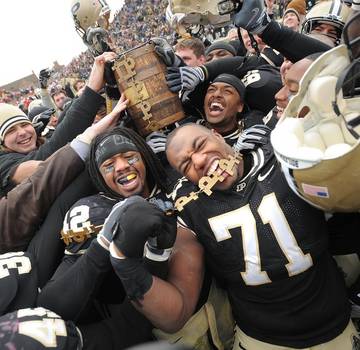 The dude is a badass if he eats gold. Imagine what he will do to linemen.

Magee was one of the first picks on day 2, going in the third round to Kansas City. The Chiefs are hoping to use him all over the defensive line, as he is one of our rare defensive linemen that is big enough to stay there in the NFL. Players like Shaun Phillips, Akin Ayodele, and Anthony Spencer have often played a hybrid of linebacker and end because of their size and quickness. The Chiefs were awful last season, so Magee should have every chance to play.

Painter cannot say the same about his NFL chances. Curtis went 201st overall to the Colts. It is safe to say he isn't exactly going to challenge for the starting job. It's a high-risk, high reward opportunity for Curtis. If he can make the roster (and beat out long-time backup Jim Sorgi) there are few better quarterbacks in the league to learn from. Unfortunately, the odds are against him even making the regular roster. Sorgi is fairly entrenched as Manning's caddy, and the Colts rarely have three quarterbacks on the active roster because Manning is so durable. Painter may find himself on the practice squad for a year or two, which is still a very good place to learn from Manning. I would honestly be shocked if he played a down in the NFL this regular season.

As for Heygood, Sheets, Orton, and Sester, I would be surprised if they didn't at least get a free agent look. I thought for sure Sheets was going to go somewhere and for much of the final round he was listed as one of the best backs available. Making a team as a free agent isn't unheard of, but it makes the task that much more difficult when you don't have a draft pick next to your name. Of these four I can see Heygood and Sheets having the best chances.

Perhaps the best news of the draft came from Denver, where they did not draft a highly touted quarterback to compete with Kyle Orton. They did draft Tom Brandstater as a quarterback from Fresno State, but all signs are pointing to Kyle being the man when training camp starts. I am definitely in the camp of hoping Kyle has an FU season to shut up all his critics, much the same way Drew Brees had in is second to last year in San Diego. At least he won't piss and moan like his predecessor in Denver.

UPDATE: Kory Sheets has signed with San Francisco as a free agent. Anthony Heygood also got on with Carolina and Ryan Baker with Miami. No word yet on Orton or Sester.

2nd UPDATE: Greg Orton gets a deal with Cincinnati.

Ladies golf wins Big Ten Championship - If you look at performance on a national stage for the past few season, the women's golf team has had more success than any other sport on campus. They have finished in the top four of each of the last two NCAA championships with a runner-up finish in 2007. Sunday afternoon they won their second consecutive Big Ten championship at home on the Kampen Course in West Lafayette.

Senior Maria Hernandez and sophomore Maude-Aimee LeBlanc tied for the individual title, while Purdue won the team title over Michigan State by 37 strokes. They will now compete in one of three NCAA Regionals on May 7-9 at either Ohio State, Arizona State, or Florida. Georgetown is hosting the NCAA championships, and the Boilers are heavily favored to return for the 10th consecutive year.

Women's softball takes a big step forward in Big Ten play - Those fortunate enough to have the Big Ten Network might have caught a glimpse of the women's softball team over the weekend. Purdue slit a doubleheader at #14 Ohio State last Wednesday before sweeping Penn State this weekend in Happy Valley. Both Penn State games were televised by the Big Ten Network, and Purdue won each 2-0 and 3-2. Liane Horiuchi entered the Purdue record books for most steals in a season by swiping her 36th and 37th bases in the first game against the Nittany Lions. To top the day off she wont he second game with a seventh inning home run. Purdue sits at 26-17, 9-7 Big Ten as it goes into its final two home games of the season Wednesday against Illinois.

Baseball swept again - Purdue's postseason hopes in baseball took a severe blow this weekend as Minnesota swept the Boilers 4-3, 3-1, and 5-2 in Minneapolis. I caught the tail end of Friday night's game on Big Ten Network and it was an ugly one. Matt Bischoff once again had a solid Friday night effort as Purdue held a 3-1 lead going into the bottom of the ninth, but it was all for naught. Bischoff gave up a single, a walk, and a double that tied the game as he came up just short in his bid for a third straight complete game. Kevin Cahill then loaded the bases and Justin Gominsky drove in the winning run on a sacrifice fly. The rest of the weekend was a struggle as Purdue netted next to nothing offensively.

This is Purdue's second straight weekend in which it has been swept in Big Ten play. The Boilers (17-21, 5-9) now find themselves on the outside looking in at the Big Ten Tournament. Indiana comes to town this coming weekend for a series that Purdue absolutely has to win if it is going to make the Big Ten Tournament.

Travis Iles wins Purdue Grand Prix - If you've ever been to Purdue you know that Grand Prix weekend is one of the greatest weekends of the year. This year the Grand Marshall was none other than Dustin Keller, showing how much the race means to alumni of the university. Sure, most use it as an excuse to drink and party, but the race itself is pretty cool. I was even lucky enough to serve as track announcer for the 2002 and 2004 races. This year the race was moved to the Northwester Athletic Complex since the old track is now going to be a practice field for the football team. Sigma Chi's Travis Iles won the event pretty convincingly, lapping all but one competitor. It was his first win in four tries. Sean Noonan finished second in a hotly contested final few laps.