Welcome to the first article in a new series profiling the best years in Purdue sports history. This series, based on your votes, will rank and review the best overall school years in Purdue history. That was the key criteria in the ranking system. The Drew Brees Rose Bowl year falls under 2000-01 because it occurred during that academic year. More than 130 of you voted in this, and I thank you for stopping by. Here is the first year which is the only one in the countdown that received zero votes. 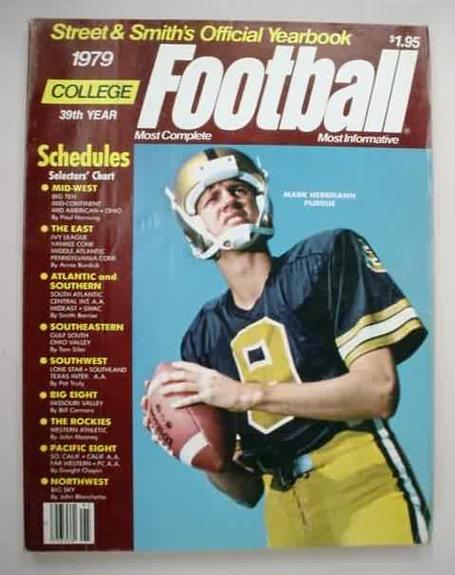 Mark Herrmann's 1978 sophomore season was statistically his worst, but he nearly led Purdue to Pasadena

Football highlights - The football team easily had the best year for Purdue sports, as Jim Young took the Boilers to just their second bowl game in school history. It was Young's second season in West Lafayette, and it was one in which Purdue returned tot eh national rankings after a long absence. Young had one of the shortest tenures as Purdue head coach, yet it was incredibly successful as he took Purdue to three bowl games in his four years.

Sophomore quarterback Mark Herrmann had, by his standards, a pretty bad season but the Boilers improved from 5-6 the previous year to 9-2-1. Purdue began the year by beating Michigan State (21-14) and Ohio (24-0) at home. A 10-6 loss at Notre Dame preceded a five game winning streak that saw Purdue beat Ohio State (27-16) for the first time since 1967. Purdue's defense set the tone during that stretch, as it gave up just 14 points combined against Wake Forest, Illinois, Iowa, and Northwestern. With a chance at a Big Ten championship on the line after a 7-1 start (including 5-0 in conference play) the Boilers stumbled in their next two games.

On November 11, 1978 Purdue suffered a bad tie at Wisconsin 24-24. They then lost to eventual Big Ten champ Michigan 24-6 in Ann Arbor. With a chance for the Rose Bowl gone, Purdue beat Indiana 20-7 at home. The brought the Bucket back to West Lafayette for the first time since 1975. The 8-2-1 (6-1-1) finish was good for second place in the Big Ten and a berth in the Peach Bowl.

Herrmann rushed for a touchdown and threw for two more as Purdue made quick work of Georgia Tech in its home town of Atlanta. Purdue built a 34-7 halftime lead and cruised to a 41-21 win. The season ended up being just the second 9 win season in school history, and first since the 1966-67 Rose Bowl winning team.

Men's basketball highlights - the highlight of the season easily came on January 13, 1979. Thant night #1 Michigan State came to Mackey Arena and left a loser as Joe Barry Carroll and the Boilers upset the Spartans 52-50. Carroll had 27 points and 11 rebounds on the night, but it was Arnette Hallman that provided the difference. Hallman hit an off-balance 25-footer as the buzzer sounded to give Purdue the win. Michigan State went on to win the NCAA Tournament that year.

Purdue tied for the Big Ten title that season with the Spartans and Iowa, but because only 40 teams went to the NCAA Tournament Purdue was not invited. Michigan State and Iowa were the conference's only representatives in the NCAA's, while Purdue, Indiana, and Ohio State went to the NIT. Purdue defeated Central Michigan, Dayton, Old Dominion, and Alabama before losing to the Hoosiers 53-52 in the final. Purdue would get revenge the next season by defeating the Hoosiers on the way to the second Final Four in program history. Purdue's final record was 27-8 under first year coach Lee Rose, and 13-5 in Big Ten play. With one more Big Ten win the Boilers would have been in the NCAA's instead. Who knows what would have happened considering Michigan State barely got the nod over them.

Field Hockey - Yes, Purdue did have a field hockey team at one time. 1978-79 could be considered its golden era as Purdue won its first of two consecutive Big Ten championship in the fall of 1978. The program as dissolved after the 1987 season.

As you can see, this was a pretty dull year for Purdue sports, but since the football and men's basketball programs had pretty good seasons it was good enough to make the list. Those seasons would set up even more successful campaigns the following year. That is when Purdue had more Big Ten and All-American honors for each sport as well. I honestly would have had more on some of the other sports, but the three computers I was attempting to write this article on were giving me issues with Adobe Acrobat Reader, so I couldn't look up a lot of stuff in various media guides. If anyone has anything they want to add to this feel free to do so in the comments section. I'll also appreciate any anecdotal comments, as I was only a fetus at the end of that basketball season. That makes it just a little before my time.

The bottom line is that this was still a pretty good year for Purdue sports, but the reason it had no votes is clear. It was a table-setting year after a long drought.