A new series to pass the time

Share All sharing options for: A new series to pass the time

It's a slow morning, so I am watching some of the tapes of old Purdue football games that were a generous gift from Boilerdowd last year. Between those and the Spoilermaker clips I have on my computer, I had an idea for a new poll and writing series. Many of you remember the Best Wins of the Tiller Era series from last year. Sadly, there were not any new ones from 2008 I could add, but the Oregon game certainly would have qualified had we not choked it away. 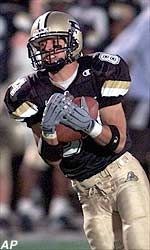 This may be the best moment in Purdue sports history.

I wanted to do similar series this year and the videos gave me an idea. What is the best academic year in Purdue sports history? Obviously the men's basketball and football programs are the highest profiled programs. Still, Purdue has had a lot of success in other sports. For the purposes of this poll I'll primarily focus on football and both basketball programs as drawing the most attention, but after the voting results I'll go back and see if there were any other notable events in other sports for those years (such as David Boudia winning a pair of diving national championships this year). It is a way to relive some great memories while also drawing a spotlight on some of the lesser known sports. Here are the best years I have come up with, and if anyone has any other suggestions I will add them to the poll:

1931-32 - Football ties for first place in the Big Ten with a 9-1 overall record. They also gave up more than 6 points just once in a 21-14 loss to Wisconsin. Men's basketball wins its only national championship behind 3-time All-American John Wooden.

1968-69 - Football begins the season highly ranked and finishes 8-2. Men's Basketball finishes as National runner-up to UCLA in its first ever NCAA Tournament appearance behind Rick Mount. Considering this was one of UCLA's seven straight titles, it could be considered a national championship since UCLA was in a class by itself at the time.

1979-80 - Football has its only 10 win season, beating Tennessee in the Bluebonnet Bowl to finish 10-2. A loss to Minnesota (4-6-1 that year) prevents the Boilers from going to the Rose Bowl instead of Ohio State (we didn't play the Buckeyes that year). The Buckeyes also defeated UCLA during the non-conference season, while Purdue lost to the Bruins. Men's basketball goes to the Final Four in Indianapolis before losing to UCLA (It was a bad year to face the Bruins). On October 12, 1979 new Boiler fan T-Mill is born.

1980-81 - Football just misses the Rose Bowl again, losing to Michigan for its only Big Ten loss. They finish 9-3 and win the Liberty Bowl over Missouri for a third consecutive bowl-winning season. Some guy named Gene Keady takes over as men's basketball coach and guides Purdue to a third place NIT finish (the NIT was much bigger then because only 48 teams made the NCAA's)

1997-98 - Football rebounds from a 3-8 season to have its first winning season in 13 years (I do not count Colletto's "winning" season of 5-4-2 from 1994 because it was forfeit-aided, though a tie was as good as a win in the Big Ten according to him). The Boilers actually contend for the Rose Bowl until a late loss against Penn State, finishing 9-3 with an Alamo bowl win over Oklahoma State and the first win over Notre Dame since 1985. Basketball makes the Sweet 16 as a #2 seed before losing to Stanford.

1998-99 - T-Mill becomes a freshman living in Cary Quad. Football finishes 9-4, upsetting #4 Kansas State in the Alamo Bowl. Men's basketball makes a surprise run to the sweet 16 when many questioned if they even deserved a bid to the tournament. Women's basketball wins the national title.

1999-2000 - Living in Hillenbrand Hall as a sophomore, T-Mill watches the football team reach its first New Year's Day bowl game since 1966-67 behind Drew Brees. Men's basketball comes achingly close to the Final Four in Indy, falling to Wisconsin in the Elite 8.

2000-01 - Three words: Brees to Morales. For the record, it was extremely dusty for T-Mill hearing Roy Johnson say "I am an American". Men's basketball fights through injury to make the NIT Elite 8. Women's basketball narrowly misses a second national title in three years by losing to Notre Dame by two in the title game.

2003-04 - In my opinion, Tiller's best team finishes 9-4 with a pair of overtime losses (to Ohio State in Columbus and Georgia in the Capitol One Bowl). This was our last New Year's Day bowl and we contended for a BCS at large bid until the tough loss in Columbus. Men's Basketball starts the season well with a convincing Great Alaska Shootout title. The championship game featured a 78-68 thumping of Duke. Unfortunately, close losses and the academic loss of Chris Booker spiral the season into a disappointing 17-14 and loss to Notre Dame in the NIT. It would be Gene Keady's final postseason appearance. Women's basketball was favored to make another Final Four before being shocked by Georgia in the Sweet 16.

2008-09 - Purdue somehow overcomes Hall of Fame coaches Bill Lynch and Tom Crean to beat Indiana in football and basketball. The Boilermaker ticket office plans a marketing campaign around the dramatic 62-10 football victory that returned the Bucket to West Lafayette after a long 1 year drought, but local stations won't let them buy five minute ad slots to feature all the highlights. IU plays hard behind the next Rick Mount of Matt Roth, but Purdue somehow finds a way to win. (Just kidding)

That's all I could come up with for now, so here is the poll. If anyone has any other suggestions please let me know. I'll consider the 10th spot as the Wild card entry for the poll suggested by you readers.