I missed a chance earlier this season to see Patrick Bade, but last night I was assigned to cover the Crawfordsville sectional final. In that game, North Montgomery won in dominating fashion over Western Boone 63-44. Incoming recruit D.J. Byrd was impressive for a number of reasons. His stat line was modest with 12 points on 5 of 11 shooting and 13 rebounds. What impressed me was the way he knew he didn't have to dominate the game, so he got his teammates involved. 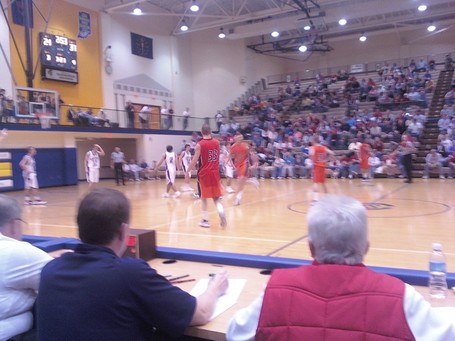 Sorry for the craptacular picture. It is the best my phone could do from the press area. I had to wait for a moment when he was entering the game.

Byrd had 10 of his points in the second quarter and the other two came on the first basket of the second half. The rest of the time he was doing all the dirty work. He set screens, handed out two assists, and used his superior athleticism to sky for rebounds. He was a big reason North Montgomery had a 39-18 rebounding edge. He didn't exhibit a burst toward the basket like I have seen him do the other two times I saw him play, but that's understandable considering he just had surgery to repair a torn meniscus. There was a very scary moment in the second half when he got the ball on a break and was fouled going up for a layup. To me it looked like he came down awkwardly on the repaired knee, but he got up just fine.

You could tell the injury hampered him a little bit, but he was far and away his team's best player so he still didn't have to over exert. He also got plenty of rest as he sat for most of the second half when North Montgomery was fully in control. One move he used three times in the second quarter was a post up turnaround jumper. I could tell he wanted to drive around his guy, but he wasn't confident the knee had that extra step. Instead, he used a turn around fade away where he just elevated over the defender and buried a 15-footer. The knee injury could be a blessing in disguise since it allowed him to develop this move, though he won't have the same size advantage in the Big Ten that he did last night. He still had solid leaping ability, but he didn't have the side-to-side movement he's used to quite yet.

After seeing him I am excited to have him on campus next year. During the previous two times I saw him (as a freshman and sophomore) I thought he had a bit of an attitude. He seems to have matured somewhat, however. His team looks to him as a leader and he fills that role very well. Even injured I think he could have put on a show last night with about 30 points, but he was content to let his teammates do the work. Fellow senior Clay Pierce had 18 points and Kal Airey had 13. Both of those players had stretches where they were individually dominant. 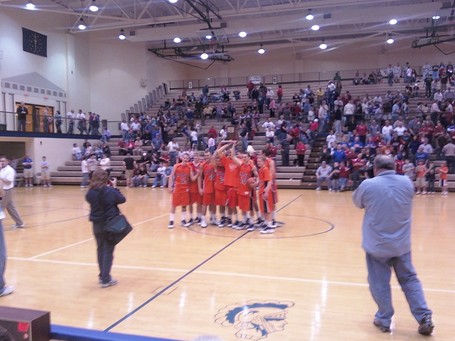 Byrd and his teammates hoist the sectional championship trophy.

This was the third time Western Boone had faced North Montgomery this season. In talking to the coach afterward he stated that the first two times they tried to double and triple team Byrd while last night he did not. North Montgomery's role players are just that solid around him that teams no longer can concentrate on Byrd. I think that will also help, because D.J. is not going to be a player that comes in and is expected to instantly dominate. I think he will be a solid role player for us next year. I look for him to play a Marcus Green role off the bench doing all the little things, but with more range in his shot.