Purdue will have its hands full tonight. Much like the men's team having to face Hasheem Thabeet and Jeff Adrien down low, the women will have to adjust if they want to advance to the Final Four. They will have to face 6'4" Courtney Paris and her twin sister Ashley. Both are forces in the paint that we must overcome if a fourth Final Four is in the cards. 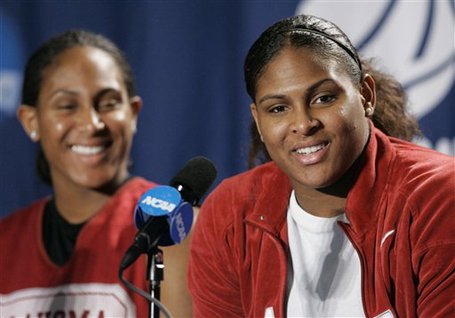 I could make a bad joke about one night in Paris, but I will refrain...

Oklahoma at a glance: Crimson and Cream machine's preview

Courtney Paris (6'4" C) - Paris is a dominant center that we honestly don't have much of an answer for. She is a double-double waiting to happen at 16 points and 13.7 rebounds per game. You can't concentrate solely on her because of Oklahoma's remaining size either. Getting her in foul trouble is a possibility, but it does not mean automatic Purdue win.

Ashley Paris (6'4" F) - The father of these twins was an offensive tackle on three Super Bowl winning teams for the San Francisco 49ers. Bubba Paris' daughters are both built like offensive linesmen too. Ashley isn't as dominant as Courtney, but she is still a strong post presence and adds 12.6 points and 9.6 rebounds per game.

Whitney Hand (G) - Hand had a career high 22 points in the Sweet 16 victory over Pittsburgh. She is only a freshman and is an accomplish 3-point shooter. We need to look out for both Paris girls kicking the ball out to her for open threes. Her outside shooting ability makes the assignment on both post players that much tougher.

Home Court advantage - Purdue should expect a hostile crowd tonight, as the Sooners are playing in Oklahoma City. This is only a short drive from their home court in Norman, and they brought a healthy contingent on Sunday night against Pittsburgh.

Balance - All five starters scored in double figures during Oklahoma's 70-59 win over Pittsburgh on Sunday night.

Experience - We have been here before. Purdue has been to five Elite 8's in the past 10 years, while this is just Oklahoma's second in school history.

Lowered expectations - Oklahoma is a number 1 seed with one of the best players in the country. They are expected to be here. Courtney Paris has even added pressure saying her career is a failure and she'll pay back her scholarship if she doesn't win a national title. That's pretty steep there. Purdue, meanwhile, wasn't supposed to even get past the second round. We have used hot starts to finish off opponents early in this tournament. We're a senior dominated team that is playing determined basketball right now.

Tournament tested - Purdue has played a very tough schedule this year. They already played a #1 seed in Maryland, nearly toppling the Terps at home before falling late. It will be critical for the Boilers to avoid another late game swoon. It almost cost them against Rutgers, and it was a major problem during the season against Maryland, Indiana, and Notre Dame. We also have an overtime loss to Stanford who is already in the Final Four, so we know we can compete with a Final Four caliber team.

Open Thread: Since I am flying out incredibly early in the morning I plan on going to bed as soon as I get home from work, then getting up for a two hour period to watch the game. This thread will be open for comments as the game goes along. Feel free to stop by and watch along with me. I figure 4AM is going to come early enough as it is, so I might as well pass the time with some basketball.