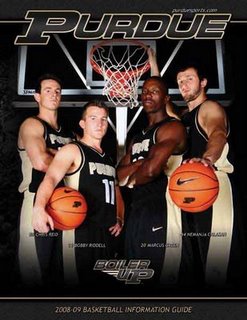 Tomorrow night marks the final time four Purdue seniors will play at Mackey Arena. Since Purdue is on its way to a third consecutive NCAA Tournament it almost seems like success is an expectation once again. That wasn't the case when these four players stepped on campus, however. Each one of them has a different story, and as a result has left a unique impression on Purdue's basketball history.

The Survivor - Marcus Green - Though Marcus will be joined by three other seniors for tomorrow night's festivities, his journey has been quite lonely. Marcus is technically the only player left from coach Matt Painter's first recruiting class. That class had a rough first season, going 9-19 and winning just three Big Ten games. That 2005-06 team suffered the ignominy of losing to Evansville, Loyola-Chicago, and getting swept by Penn State, Northwestern, Indiana, and Ohio State in Big Ten play.

Yes, Marcus, We love you.

Green set career highs that season for points and minutes played simply because we didn't have any other options. Both Carl Landry and David Teague were out with knee injuries. Even tight end Charles Davis, who had given some minutes the previous season after football was done, didn't come out as he concentrated on the NFL draft. Green stuck with the program though, even as the other six recruits in that class fell by the wayside. Here is the fate of those other six guys:

Nate Minnoy - Quit team after season. Eventually transferred to Central Michigan where he has not played this season.

Marcus White - Transferred from Connecticut. Played half a season before a lingering back problem ended his career.

Tarrance Crump - JUCO transfer. Was suspended for 2005-06 season due to hit and run incident. Played the last two years for us and graduated as 2008's lone senior.

GBI did an excellent focus piece on Marcus Green yesterday in light of the honor he received by the student section at Saturday's Ohio State game. Marcus' game has reflected his tenacity. He's not our leading scorer or rebounder, but he has evolved to do all the little things we need each night in order to win. A play that stands out happened in the Michigan State game a few weeks ago. After missing a layup, Marcus physically ripped the ball from a Spartan player who had secured the rebound and put the ball in the basket before said player realized the ball was gone. It was only two points, but plays like that really affect the flow of the game. That is what Marcus does.

Most importantly, Marcus will graduate in May with a degree in Organizational Leadership and Supervision. There is no NBA for him, but he is still a success story. I wish Marcus the best after this season, and thank him for his contribution to Purdue.

The Townie - Bobby Riddell - I feel like I have known Bobby Riddell forever. Through my work with the Kokomo Tribune I covered Bobby a two or three times in high school since I always seem to get the Kokomo-Harrison game at Harrison. The kid was a pure shooter even then. In my opinion, there is always room for kids like Bobby who can simply fill the basket if they are open. That's what Bobby did from the minute he got on campus.

Like Marcus Green, Bobby had to play quite a bit that freshman season in 2005-06. He didn't have the benefit of a scholarship though. He came in as a walk-on with incredibly low expectations, but developed a penchant for hitting threes. Even then the student section went nuts whenever he scored, and his tendency to hit the 3-pointer gave way to the name Bobby Buckets.

He's far from physically gifted at 5'9", but man can the kid shoot. His seminal moment had to have come this year in the Penn State game at home. Robbie Hummel was out for the night and we needed a boost. Though Bobby's minutes were cut back drastically the past two seasons, we needed him on this night. In 24 minutes he gave us a career high 13 points, nailed three huge triples, and even had a coast to coast layup weaving through the defense. Bobby also had four assists in that game, and could have had a few more as perfect entry passes allowed JaJuan Johnson and Nemanja Calasan to get to the line.

I am one of the people that loves seeing Bobby Buckets play. I am very glad he has emerged as a key role player down the stretch here, expanding our rotation from 8 to 9 players and giving us keys moments of rest for the other guys. Bobby will graduate in May with a degree in Accounting. I thank Bobby for being a crowd favorite and getting to do what many only dream of. His hard work has paid off and it had to be a special moment when he was interviewed on the court aft the Penn State game to a standing ovation.

The Bosnian Bruiser - Nemanja Calasan- I was actually involved slightly with the recruitment of Nemanja Calasan. Chally is now a key component of our roster, but when he was trying to decide where to go once he was done at Midland Junior College we were unsure if we would get him. Kentucky wanted his services, but we desperately needed his size and strength considering we had little to no post presence returning. Fortunately, Chally chose us.

That's where the fun begins. One of the many temp job I have had in the past four years was answering phones at the NCAA's eligibility center. It was a fun job, as I was involved in assisting players, parents, and schools with getting kids eligible. Academically Chally was fine, but in his native Bosnia he had sat the bench with a professional team for a couple of games. This led to an amateurism issue and I was the one who fielded a call from the Purdue compliance department one day asking about his status.

Amateurism is a funny thing with the NCAA. Normally it is a slam dunk approval process as long as the student fills out the form online and signs the questionnaire. If there is an issue, like there honestly was in Chally's case and it was documented, it can take quite a while to get all the information necessary before a player can be cleared to play. Amateurism can hang a player up just as much as an academic issue too. Because it took so long to get all the necessary information there were serious questions on whether Chally would get to play last year at all.

Eventually, those issues were resolved, but they cost Chally the first two games of last season. Since then he has become a valuable contributor and a player that can give us an unexpected 10 to 15 points at any time. He's a hard worker and we definitely would not be where we are without his contributions. Chally will graduate in May with a degree in Criminal Justice and Law. I thank him for coming to Purdue and inspiring some students to proudly display the Bosnian flag for every home game. Chally, I'll accept my thank you for helping you in a very small way to get eligible by continuing to watch you play with a deep run in the NCAA Tournament.

The Consummate practice professional - Chris Reid - In two seasons Chris Reid has scored just three points. He had a basket against Northwestern on senior day last season and added a free throw against Arkansas-Pine Bluff earlier this year. When we recruited him from Butte Junior College he knew he likely was not going to see much actual playing time. We needed a big body in practice for Calasan and JaJuan to train against and Reid fit the bill.

I would like to have seen him play a little more this season, but that hasn't been the case. We really could have used him last week against Michigan, but Chris is just one of those guys that makes his contributions during practice when few people are in the stands. That means he embodies the spirit of Purdue basketball by being the ultimate team player. It would be a shock to see him play more than a minute in any game the rest of the season, but he is still a valuable member of this team that will be missed.

Chris will graduate in May with a degree in Sociology. I will remember him as the brave man that wore the short-shorts during Mackey madness this season. Chris, you're a good guy ad I thank you for your contributions, but please don't ever wear those shorts again.