Share All sharing options for: Know thy NCAA Tournament Opponent Round 3: Connecticut Huskies

After seeing the monster who is Hasheem Thabeet and realize you do not have the size or the strength to play with Uconn, you'll immediately see that you guys are just outclassed. The athletes are just too much to handle for Purdue this time. You can throw in all the statistics you, bottom line 7'3" and a hall of fame coach doesn't lie. Sorry boys

The funny thing is that I am not afraid. We have faced teams with "better athletes" this year and held our own. We have faced dominant big men like Blake Griffin and Jon Brockman and done just fine. Sure, people say Griffin owned us in a win, but it's hard to lose when you shoot 39 more free throws than your opponent, and we still tookt hem to overtime. We have faced Hall of Fame coaches like Krzyzewski, Izzo, and Crean (kidding!) and have come out just fine. We may have lost some of those games, but I would say only in the Duke game were we outclassed. That was months ago. We are a different team now. 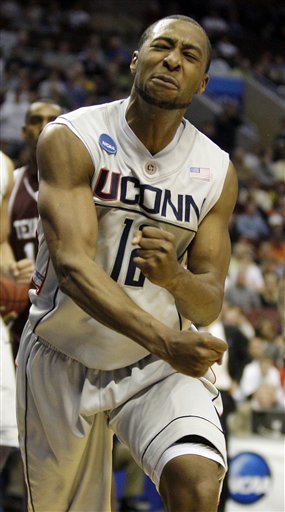 Is this where we tell Bob Barker, "The Price is Wrong, bitch!"?

There is little question that Connecticut is well coached and supremely talented. We will respect them, but we are far from afraid of them.

Blog Representation: The UConn blog, UConn Huskies Basketball, Matt's UConn blog (each will have their say later this week)

It is safe to say that this is our next shot at national recognition. Based on some early preseason rankings the teams are about equal. We have obviously fallen from that lofty perch, but Connecticut has done nothing to move out of the top five all season long. I mentioned that we will not be afraid of them, but they certainly will not fear us. They are an elite national program with the profile and wins to match. They have faced some of the country's best teams and walked away the winner more often than they have lost. A major reason Pittsburgh is a number one seed is because they have given the Huskies two of their four losses. A third came in a six overtime classic against Syracuse two weeks ago in the Big East Tournament. The only other team to beat UConn was Georgetown. The Hoyas were a Final Four team two years ago that severely underachieved this season. They aren't exactly Sisters of the Poor and Blind. Even though the loss came at UConn it is far from a bad loss. At the time Georgetown was 9-1 and ranked 8th. Afterward they went 5-15.

It is not a stretch to say those were a couple of UConn's worst games this season. If you match common opponents we only have two games of comparison, but they are two solid games. UConn defeated Wisconsin by 19 very early in the season to win the Paradise Jam down in the Virgin Islands. Michigan then played a strange non-conference game at Connecticut during a conference bye and hung with the Huskies before losing 69-61 in January. The Wolverines actually led by a point at halftime and were within five in the final minutes. We went 3-1 against those same foes, so we are certainly capable of competing.

Our biggest challenge on Thursday night will be rebounding. Connecticut's offense is very balanced with four players averaging in double figures (though Jerome Dyson and his 13.2 points per game is out for the season), but their rebounding is what keeps them in games. It is absolutely imperative that we limit them to one shot per possession as much as possible. 7'3" Hasheem Thabeet (13.7 ppg, 10.7 rpg) and 6'7" Jeff Adrien (13.9 ppg, 10.2 rpg) each average double-doubles every night. Thabeet is a natural shot blocker with his size, adding 4.4 blocks per contest. Hummel and Adrien are similar in size, but Thabeet has an advantage even over JaJuan Johnson. Beating them on the boards will be a matter of out-working them and getting in the proper position. We cannot be lazy. Every time a shot goes up we need to shove a butt right in their stomachs and get the right position. Boxing out is absolutely critical because we cannot win this game if Adrien and Thabeet are constantly beating us on the glass. Both of them are excellent offensive rebounders with more than 100 second chances on the season.

Thabeet is obviously an imposing physical presence, but the advantage we have is that JaJuan can draw him out of the lane. He is not nearly as effective away from the basket as JaJuan is. When we have the ball it will be important to attack the basket when JaJuan has the ball against him in the high post. This can eliminate his shot blocking defensive presence as well as his rebounding ability. Offensively we just have to keep him off the glass and keep their guards from penetrating.

6'2 senior guard A.J. Price is Connecticut's leading scorer at 14.6 points per game. He is also an excellent distributor with 4.8 assists per contest. The guy is an excellent scoring, slashing guard and is capable of dropping 30 points on anyone. He can play on the perimeter or drive. He has made nine 3-pointers already in this tournament and is shooting almost 50% from the field. As much as we need to concentrate on Thabeet and Adrien, Price is the catalyst that runs the Connecticut offense. Kramer will likely draw the assignment against him, but I can see us switching up defenders on him like we did against Stephen Curry, Kalin Lucas, and Talor Battle. He is a similar type of player to them, but he is probably better than all of them with more size.

Dyson's injury means Connecticut's bench is shorter than it has been most of the year. He hasn't played since a win over Syracuse on February 11th though, so they have had plenty of time to adjust. 6'1 freshman Kemba Walker (8.7 ppg, 2.8 apg) is a promising young talent that helps run the show in the backcourt with Price. 6'9" forward Stanley Robinson (8 ppg) could be a major factor as well. If Connecticut goes big with Robinson, Thabeet, and Adrien it will be difficult to match their size.

Connecticut normally goes with just a seven man rotation. 6'3" senior guard Craig Austrie (7ppg) and 6'9" junior forward Gavin Edwards (4 ppg) round out their rotation. No one else plays more than four minutes per night. It is a smaller core than some of the teams we have recently faced, but let's face it, they are really, really good. We can't expect to tire Connecticut out. They are just fine with running and can comfortably score almost 80 points per night.

As with most number one seeds, it is difficult to find a weakness in Connecticut's game. They share the basketball (almost 16 assists per night), they rebound well, they don't turn it over much, and they are rarely in foul trouble. Things may be different if we can get them into a Big Ten slugfest, but they only average 13 fouls per game. Because of their short bench it could give us a big advantage if we can get them into foul trouble. That is why positioning is important on rebounding. If we can get proper position and grab a few over the back calls it can change the game's entire dynamic.

Getting them into a Big Ten slugfest does not mean an automatic win, either. Connecticut can play some defense. Holding a team under 60 points is pretty common for them. Their size allows them to adjust well to a slowdown pace because they can pound teams into submission with Adrien and Thabeet inside. We may actually be better suited running against them because it doesn't allow Thabeet to set up in the low post and swat everything away. Still, I would attack him directly. We must show we don't have any fear of going against him and draw some early fouls if we can.

This is going to be a tough one for us. I know we don't fear them, but that can only go so far. I am confident we can give them a game, but we will have to continue playing as a team with each piece complimenting the others. JaJuan has to draw Thabeet away from the basket on the offensive end and avoid foul trouble on defense. Robbie has to keep putting in work on the glass. If he can score more that will be a huge boost. We need Marcus to do all the little things when he is in there and avoid foul trouble. The same is true with Chally. Against dominant big men in Griffin and Brockman we were competitive, but battled foul trouble the whole game. Keaton and E'Twaun need to hit some threes to draw out their defense. Moore must also create his own shots and seize the moment. I saw it in his eyes out in Portland. I can feel E'Twaun has a big scoring game coming very soon. Kramer and LewJack need to lock in on Price and essentially make his life a living hell every time he has the basketball the same way they didn't let Kalin Lucas even call plays.

Teams beat Connecticut, not individuals. The last two times Connecticut has lost in NCAA play they didn't lose to teams with superior talent. Indeed, Connecticut had superior talent each time. San Diego and George Mason toppled them because they played virtually flawless team basketball against an opponent that occasionally (but not always) strays into a trap of NBA individuality. I do think this UConn team is different from those UConn teams though. They have learned from those losses and don't go intot hat "me first" mode as much. The challenge we present is that we play as a team like George Mason and San Diego plus we have pretty good talent.

The biggest keys, however, are to hit some shots and not allow them to own the offensive glass. I really like our chances if we can consistently limit them to one shot per possession. Unfortunately, I am also a realist. I believe we will give Connecticut a much closer game than people expect, but in the end their size will be a little too much. UConn 73, Purdue 69