WE ARE STILL HERE! (a.k.a: the Washington recap)

Share All sharing options for: WE ARE STILL HERE! (a.k.a: the Washington recap)

I've had about 24 hours to reflect on our great win over Washington now. The glow still hasn't worn off. Not only are we still playing, but I know it is really bothering a lot of people in the media that we are still playing. You could see it yesterday if you read between the lines. We beat a team we supposedly had no chance to beat, but instead the focus was on how we almost blew the game instead of the fact we outplayed a great team. You can even already see how the previews for our sweet 16 game are going to be. Connecticut was the high scoring team on the first weekend. They won both of their games easily, but they were against the lowest seeds they could have possibly faced. We're going to be given no chance against them.

And I am fine with that. 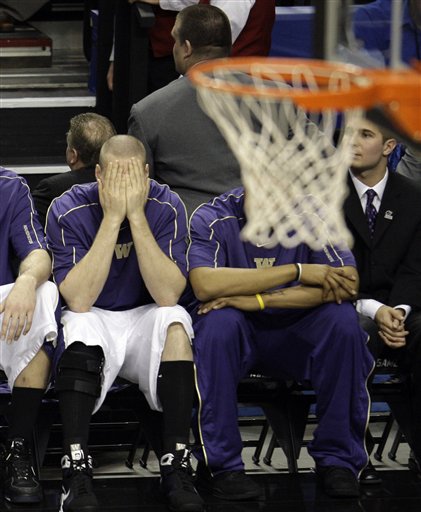 Can we make others cry like this because they didn't think the Old Gold and Black could beat them?

We can put the white jerseys away now unless we meet Arizona in Detroit. We now fill the role of Cinderella as a five seed since 14 of the top 16 seeds are still alive. There are absolutely no expectations from this point forward.

Positives from the Washington game:

"A lot of people talk about offensive possessions and making shots. It always comes down to making stops," - Matt Painter

The other team cannot beat you if you simply prevent them from scoring. Their talent level, size, strength, speed, ability, and effort does not matter if you prevent them from putting the ball in the basket. Digger and the media do not seem to realize this. Yesterday we saw that in the final minute from Mr. Johnson. I don't care if the final score is 6-4, or1,265,788-1,265,787, as long as we have the higher number at the end it is all that matters. Yes, JaJuan's 22 points were huge, but it was his two blocks that kept us in the lead. When we absolutely needed a basket we were able to give him the ball and he got it. What will make JaJuan so valuable next week is that he can draw a shot-blocker like Hasheem Thabeet away from the basket and free up the lane. He is developing the total package for a big man, and if he stays two more years he will be unstoppable in 2011.

That only means we must do some serious subliminal work on him. This has to be an effort by all Purdue fans to remind him he is not ready for the NBA yet.

Keaton Grant - That had to be one of the quietest double-doubles I have ever seen. In true Purdue fashion, Keaton worked his butt off yesterday. He did all the little things we needed in order to win without drawing attention to himself. Many Washington fans were saying we didn't have the depth needed to hang with them. They predicted we would run out of gas. I didn't even realize we limited out normal eight man rotation to mostly six. Chally played just 7 minutes and Marcus Green was limited to four minutes because of fouls. Keaton was the bench last night, and he was phenomenal in doing so.

Lewis Jackson - I have long talked about unexpected offense. JaJuan, E'Twaun, and Robbie are clearly our primary scorers. We look to them the most, and we are a better team when we get unexpected offense from someone else. LewJack provided that offense yesterday. 11 points is big for him, and with a few more layups dropping he would have been close to 20. His quickness gave us an element few "experts" expected from us. More importantly, he was money from the free throw line. The real question here is: Who will step up in this way for the next game?

Robbie Hummel - We didn't look to Robbie that much on offense. Where he made a huge difference was on the glass. That's what I love about him and everyone else on this team. There is almost zero ego for everyone. Each player is willing to sacrifice personal glory in order to help the team win. Robbie has been our best rebounder of late. I don't care that his scoring has dropped off of late. He is doing all the little things necessary in order to win. This attitude is infectious and if we upset Connecticut, that will be reason #1.

E'Twaun Moore - Yesterday was the first time I saw flashes of the old E'Twaun. Because of that, I have big expectations for him against UConn. I could feel yesterday that he wanted to take that game over. Against Northern Iowa he wanted the ball at the end of the game as well. I know I am not the only one that sensed he has, "the look". Of everyone on the team, I think E'Twaun is most capable of getting red hot and dropping 40 on a team. I have known that since he took the Golden Child Eric Gordon to school in the 2007 Class 4A state title game. He showed glimpses of being on fire against Ohio State last week too. UConn could be that game where he simply goes off.

Bench play - I already talked about Keaton's play, but our bench out-performed theirs. Chally had a big three at a huge moment and didn't do anything wrong when he was in there. Washington, in return, got virtually nothing from its bench. Elston Turner hit a huge 3-pointer, but those were their only bench points. Outside of that they had two assists, three rebounds, and five turnovers from their four bench players. We turned what was supposed to be a strength into a weakness and basically dared Pondexter, Brockman, and Thomas to beat us as a three man team.

Negatives from the Washington game:

The entire second half against Pondexter, Brockman, and Thomas - I am 29 years old and in relatively good shape. I work out 3-4 times per week and can run a 7 minute mile. Seeing those three attack us down the stretch last night left me more exhausted than last week's Big Ten Hoops Day 5K. I give an enormous amount of credit to Washington for not folding when it looked like we were going to run away with this thing. Between the 12 and 8 minute TV timeouts of the second half they trimmed the lead from 11 to 4 and put every Purdue fan in panic mode. I even think we were playing good defense. They simply executed well. Brockman was a beast on the offensive glass and is worthy of all the praise he received before the game. The only post player better than him that I have seen is Blake Griffin. The Thomas vs. LewJack battle was everything it could be. Pondexter could be a Pac-10 POY candidate next season. This team will get better a year from now.

Layups - We need a week's worth of layup drills, like right now. I am tired of penetrating only to see the ball roll off the rim.

We are still alive.

Look at those four words for a moment. Right now there are 342 division 1 basketball schools with another 7 going through reclassification to move to division 1. That is 349 schools. Right now, 333 of those schools have absolutely zero chance of winning the 2009 Division 1 men's basketball national championship. Indiana and their five titles cannot win it. Kentucky cannot win it. UCLA cannot win it. Arkansas, California, Cincinnati, Florida, Georgetown, Holy Cross, LaSalle, Loyola-IL, Marquette, Maryland, Michigan, North Carolina State, Ohio State, Oklahoma State, Oregon, San Francisco, Stanford, UNLV, UTEP, Utah, Wisconsin, and Wyoming are all former champions in addition to the above bluebloods. They all have no chance this year of adding to their register.

Purdue can win it.

I know the mere fact that I believe Purdue can win this tournament will instantly discredit me from being a true journalist, but I do not care. Louisville, Arizona, Kansas, Michigan State, Connecticut, Purdue, Missouri, Memphis, Pittsburgh, Xavier, Villanova, Duke, North Carolina, Gonzaga, Syracuse, and Oklahoma are the only teams left that have a chance.

Your conference affiliation does not matter.

Who says who is great in the media does not matter.

Only those 16 schools matter, and we are one of those 16.

Thursday night we play Connecticut at 7:07pm at University of Phoenix Stadium. That is the most important game of the season. Should we win, the victory needs to be viewed as just as important as our win over Arkansas-Pine Bluff, because the next game against Memphis or Missouri will then be the most important game of the season. Until around 9:15pm Thursday night, however, only Connecticut exists. That is all we can control, and it should be our sole focus.

No one will give us a chance. Connecticut has won their games by 82 combined points. We have won ours by seven combined points. The 82 is the largest margin of victory for the 16 teams left. The seven is the smallest. The only thing that matters is two though.

We have two wins in this tournament, and so do they.

You WILL respect us by 9:15pm Thursday night, win or lose.