Share All sharing options for: Know thy NCAA Tournament Opponent Round 2: Washington Huskies.

Before getting into a preview of our possible second round opponent in Washington, John Berkowitz from the SBNation blog UW Dawg Pound agreed to answer a few questions about the Huskies for me. Here is what John has to say about the potential Boilers-Huskies matchup: 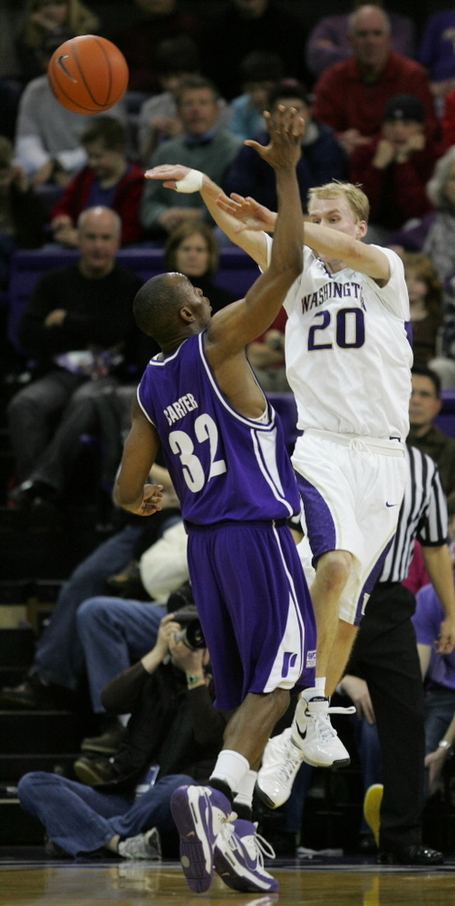 This isn't the Rose Bowl now. You're playing our game.

Hammer & Rails: With two bowl games and a four game series in the early 90's, Purdue fans are very familiar with the Husky football program. Basketball is a bit of a mystery though. Purdue is 3-1 all-time against UW and hasn't played them since a strange 2 game series in Seattle on December 8th and 9th way back in 1967. What can you tell us about this year's Husky squad other than they are Pac-10 champs?

UW Dawg Pound: I'm actually old enough to kind of remember that two game series in 1967. I have no idea why they did that. This year's squad can be described as a very blue collar unit. UW is the leading rebounding team in the Pac 10 and one of the leaders in rebounding margin nationally. If you don't hit the boards you won't beat Washington. The Huskies play aggressively on defense and apply a lot of pressure on opposing guards. We have a nine man rotation so we tend to wear teams down. The team is led in scoring by PG Isaiah Thomas, SG Justin Dentmon, PF Jon Brockman, and SF Quincy Pondexter. UW isn't a great outside shooting team. They like to penetrate on offense and it all revolves around Jon Brockman who leads the Pac 10 in career double-doubles pounding it out inside.

H&R: In just taking a quick look at the statistics your squad reminds me a lot of our second round opponent last year in Xavier. They were very balanced with four players in double figures. How do you expect this to match up well with our known defensive prowess?

UWDP: We have a lot of depth and speed at the guard position which tends to help negate tough defenses. Since we are a great rebounding team we get a lot of second and third chances on offense which is good because we aren't exactly a great shooting team.

H&R: I know Washington was not on the short list of Pac-10 favorites this year, especially after a loss to Valpo in last year's CBI. At what point did this begin to feel like a special season for you?

UWDP: We didn't start the season well losing to Portland, Kansas, and Florida State in December. I think most of us felt that special feeling after the first half of conference play when we had a two game lead in conference play. Sweeping the LA schools in Seattle was probably the point where we thought this team was tournament bound.

H&R: This game could be a case of East Coast Bias vs. Big Ten Disrespect when it comes to the media. Which of those do you think is a bigger issue?

UWDP: I don't think it really matters since the game will be played in Portland which gives UW a home court advantage. These games come and go so quickly at this point of the tournament that the media isn't much of a factor. It isn't like the buildup that comes with a Rose Bowl game.

H&R: Finally, what does Washington absolutely need to do to beat Purdue, and what must Purdue do in order to beat Washington?

UWDP: Washington needs to out-rebound the Boilermakers and put pressure on your guards to create mistakes which result in points. Washington's depth on defense is always a factor and it tends to tire teams out late in the second half. Purdue needs to counter the aforementioned and also counter Washington's strength inside by shooting the ball well from the outside. A blizzard of three's from the outside always loosens things up. Washington's guards will pressure the heck out of you and the deep rotation allows them to do that for 40 full minutes. Most importantly Purdue needs to stay out of foul trouble and take away UW's tempo.

By seeding nature, a 4/5 nature is usually one of the most competitive second round games. We are a major conference tournament champion and they are a regular season winner of a major conference. We each have 25 regular season wins. Both teams are tournament tested, as the Huskies (counting Mississippi State) will be 10-7 against NCAA teams. Our record against NCAA Tournament teams if we beat Northern Iowa: 10-7.

As John mentioned, Washington stumbled out of the gate in losing three of their first five games. I do give them credit for having the guts to open the season with a true road game at Portland, though it ended in an 80-74 loss. The Huskies followed that 2-3 start with a nine game winning streak. They truly earned their Pac-10 championship as that conference is the only major conference that has a true round-robin home and away format. Washington grabbed at least a split with everyone except California, which is a major reason why the Golden Bears are dancing as well.

Statistically, Washington reminds me a lot of our second round opponent last year, Xavier. They feature four guys who average in double figures and take care of most of the scoring. Isaiah Thomas (15.4 ppg, 2.5 apg) leads them as a slashing point guard. As mentioned above, no one is a strong outside shooter, but Thomas can get in the lane and disrupt things by scoring or dishing on penetration. It will be critical for us to stay at home on defense so we don't allow the dribble drive. This is a team that we can relax a little bit on the perimeter against.

Shooting guard Justin Dentmon is the team's best 3-point threat, shooting better than 42% from long range. He averages a little more than 15 points per game and also adds 2.5 assists. He is probably their only legitimate threat from long range. Thomas has 37 made 3-pointers on the year, but he shoots worse than 30% from out there. Only backup freshman guard Elston Turner, Dentmon, and Thomas have more than 8 made 3-pointers on the year. Turner averages 3.5 points per game, but mostly because he hits about one 3-pointer per game (23 on the year). It is clear that Washington's guards are not comfortable unless they are getting into the paint, so we have to take that away from them.

Jon Brockman (14.9 ppg, 11.2 rpg) may be the best forward we have faced since Blake Griffin in terms of statistics. He's a tad undersized going against JaJuan at only 6'7", but he makes up for it with a solid 255 pound frame. Think Carl Landry (get well soon, big guy) when you think of Brockman. Washington loves to look for him in the paint and he is an excellent offensive rebounder. We have to get a body on him any time a shot goes up. If we rebound the way we did against Northwestern Brockman will own us.

Forward Quincy Pondexter (11.5 ppg, 5.7 rpg) rounds out the strong foursome for the Huskies. He is also an excellent offensive rebounder and can clean up the messes left by a generally poor shooting team. The fact he is also a good offensive rebounder makes our assignment even more difficult against Brockman.

After Pondexter, the scoring for Washington drops off a bit. Five other guys play at least 13 minutes each night, matching our own nine man rotation. As John mentioned, Washington relies on the depth of its defense to wear teams out. In addition to Turner, we can expect to see Matthew Bryan-Amaning (6.3 ppg), Venoy Overton (5.9 ppg), Darnell Gant (3.1 ppg), and Justin Holiday (2.2 ppg). Washington is also a young-ish team like us. Only Dentmon and Brockman are seniors, but having a senior big man like Brockman will pay big dividends.

Despite the fact that Washington is a very good rebounding team, they do not have a lot of size. Of the regular rotation Brockman is the tallest at just 6'7". That tells me their rebounding comes mostly from effort, so we must return he effort in kind. It will be interesting to see how this plays out if we can go big with Hummel, Calasan, and Johnson at the same time. Hummel should have a size advantage out on the perimeter as well. The Huskies are a team that works very hard on the glass. It is a major staple of their offense. If we equal or better this work ethic we will have an excellent chance at moving on against them.

Washington is a good, but not great defensive team. We are well known for our rule of 64 (24-2 when teams score 64 points or less against us, 1-6 when they get 65 or more). Washington is used to playing at a much faster pace than that. They average nearly 79 points per game, but give up 69.5 in return. In every loss they have given up over 73 points, and in six of them the opponent topped 80. We had similar concerns facing Baylor in the first round last season. We then proceeded to play them at their own game and run them out of the gym.

That is what I think will be a major benefit. We are known as a defensive team, but we can play a versatile style such as that. We adjusted last year with essentially the same personnel  against Baylor and won easily. I can see Washington getting frustrated with us slowing down the tempo just as much as I can see us running with them. I would rather have the former, but we can compete with the latter. Washington also already commits almost 15 turnovers per game without having to face the defenses of the Big Ten. They actually commit, on average more turnovers than assists. That is not something I would want when facing our defense.

The biggest key to this game is to not get killed on the boards. We have to rebound like we did against Michigan State in Mackey Arena, not like we did against Northwestern. Robbie Hummel had some great boardwork for three days in Indianapolis and it must continue if we are to face the Huskies. It is absolutely critical that we limit Washington to one shot per possession, especially if that one shot comes from someone other than Brockman. The Huskies do get to the foul line quite a bit and hit about 70% once they are there. Because of that, we must stay out of foul trouble, especially with our bigs. If we can play this game at our pace it gives us a huge advantage. I still like our chances even if we play the game at their pace. Purdue 75, Washington 70.