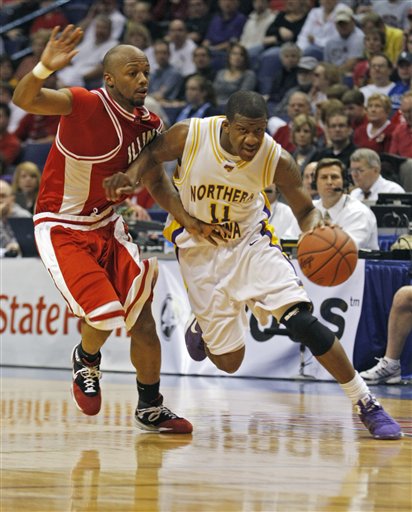 Being a regular season champion in the tough Missouri Valley Conference normally means you are a shoe-in for the NCAA Tournament regardless of your conference tournament status. This was a down year for the Valley, however. Only co-champ Creighton had a legit chance for an at large bid, and their bubble may have popped with Mississippi State and USC winning their respective conference tournaments. Northern Iowa is a good team, but the only reason they are here is because they survived overtime against Illinois State at Arch Madness.

The Panthers really don't have a signature win on their schedule. As seen above, they played just two NCAA Tournament teams all year and lost both games. Against the next two best teams in the Valley, Illinois State and Creighton, they were 4-1. All three games against Illinois State were decided by less than four points in favor of the Panthers and the last two went to overtime. Their overall schedule is more known for some bad losses rather than good wins.

The Panthers began Missouri Valley play with a shocking home loss to Indiana State. They also had a seven point loss to Horizon League member Illinois-Chicago and a 69-61 loss to middling Valley team Wichita State. Their best win may have come against bubble team Auburn in a 105-93 victory at the Chicago Invitational Challenge. The Panthers won plenty of games this year, but they were rarely dominant. Their struggles with Indiana State above provide plenty of evidence.

Overall they are a smart team. They don't turn the ball over much and they generally shoot about 45%. They are a good free throw shooting team, hitting for 75% from the line. They can shoot the 3-pointer at a decent 35% clip and they share the basketball with more than 12 assists per game. They have a regular 8 man rotation, but it isn't unheard of for them to go into their bench a little more with two other players.

Adam Koch (12.8 ppg, 5.2 rpg), Kwadzo Ahelegbe (11.8 ppg), and Jordan Eglseder (10.1, 6.5 rpg) are their three players averaging in double figures scoring-wise. Koch is a 6'8" junior forward that will likely match up with Robbie Hummel. Eglseder is a 7'1" junior center that will be playing against JaJuan. He presents an interesting challenge because he is not afraid to step outside and shoot the 3-pointer. He is 2 of 14 this season after going 9 for 25 last year from long range. He doesn't do it often, but it is something we will have to keep in mind. Eglseder does his work in less than 20 minutes per game as well. If they can keep him on the floor longer than that it will benefit them. Eglseder hits almost 60% of his shots from the field, but many of those are from five feet in. If JaJuan can eliminate this threat it will seriously cripple Northern Iowa's upset chances.

Ahelegbe is a 6'2" sophomore guard that didn't play at all last season. He leads the team in assists at 3.2 per game and is also one of their top 3-point shooters. Their best long-range shooter is Junior guard Ali Farokhmanesh. He averages 9.6 points per game and hits for 38% from long range. He is a junior college transfer in his first year at the division 1 level. 6'1" freshman guard Johnny Moran (8.4 ppg, 3.9 rpg, 2.2 apg) rounds out their top five.

As you can see, Northern Iowa is a very balanced team. They don't feature a dominant scorer. They rely on team basketball and finding the hot hand each night. They are very much like a poor man's version of our own team. They also have plenty of experience with four junior starters. 6'6" sophomore forward Lucas O'Rear provides decent support off the bench and can rebound effectively as well. 6'3 senior guard Travis Brown  and 6'6" sophomore guard Kerwin Dunham round out their regular 8 man rotation. Adam Rodenburg and Brian Haak have been known to play a few minutes occasionally, but they are not major contributors. They will likely only play a few spot minutes or in mop-up time.

I think this is a good matchup for us because of their similarities to our own style of play. Northern Iowa is one of the better defensive teams in the Valley, but they still give up 63.5 points per game. They are also the top shooting team in the Valley percentage-wise, but they have yet to see a defense like ours. Honestly, it is a game we should win and win easily if we continue to play like we did this weekend in Indianapolis.

In terms of experience against tournament opponents this one is a no contest. As mentioned above, Northern Iowa played just two NCAA Tournament teams this season and lost both games. We had 16 games against NCAA foes, going 9-7 in said games with three losses in overtime. There is no question that we are the tougher, more tested team. Upsets can happen though, so we have to stay focused and continue playing at the level we are capable of playing at.

The biggest factor will be how JaJuan Johnson responds to playing against a big player in the paint. If he can dominate him with his athleticism on the defensive end it will seriously hurt their chances. They don't have one player that we can sick Chris Kramer's lockdown defense on, so playing team defense on the perimeter will be critical. Many of these 5-12 upsets happen because the underdog gets hot from long range and has a player that can remove some pressure on the perimeter by scoring down low. If we can force some turnovers with our pressure and prevent Eglseder from having much of a post presence I don't see an upset happening.

Honestly, we're the better team here. We're deeper, more talented, we play better defense, and we have played the tougher schedule that has prepared us for this moment. It is the type of game we absolutely should win, and I would not be the only one seriously disappointed if it ends in a loss. I feel like yesterday's Big Ten Tournament championship could be a huge milestone for this group. They know what it is like to play and win at a championship level now. We did not have that experience in the past. There is a huge difference between thinking you are a championship level team and knowing it. We know what it is like now, and that will serve us greatly not only this week in Portland, but over the next few seasons as well. Purdue 75, Northern Iowa 60