I was a sophomore in high school the last time Purdue won a men's basketball championship of any kind (unless you count the Great Alaska Shootout from 2003-04). That was the third of three straight Big Ten titles, but the program with the most such titles had been in a drought until today. We were more than read. The vastly pro-Purdue crowd (at least 75/25 in our favor) was in a frenzy once things started to turn our way in the second half. 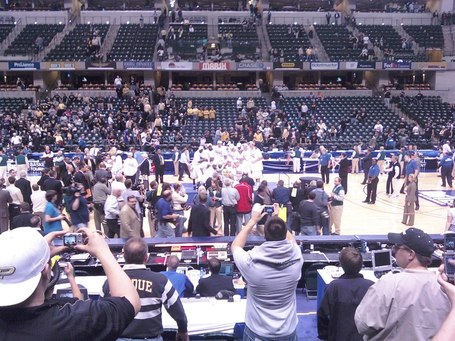 Those who stay will be champions

That is the thing I will take away most from today. Purdue fans came out in force and took over downtown Indianapolis. We had a large contingent in the 5K race in the morning to witness my 93rd place finish. I would say at least one in six of the more than 600 people in the run were in Purdue attire. At lunch restaurants were overrun with fans. The scalpers out in full force practically attacked anyone wearing Purdue attire, and fans were more than happy to relieve them of tickets. Once inside the arena the lower two bowls were almost completely full, while my ticket purchased for half price had me sitting right at center court of the balcony level. Only the upper corners of Conseco were virtually empty. I was lucky that some friends of mine had club level seats on the opposite side and two seats behind them were open, so I was able to join a very vocal Purdue contingent down there for the second half.

Even the students came in full force. They were scattered throughout the arena, but Paint Crew shirts were everywhere. The band even led chants over the Ohio State band when they were playing (complete with IU Sucks in appropriate places). We took over Conseco and made an atmosphere that was much like a home game in the second half. It was a better, louder crowd than even the two Pacer games I have been to this season. It's only natural it felt like home too. We've now played four games there and we're 4-0 for the year. The only place we've played more games in is Mackey Arena.

I'll have a lot more about the NCAA Tournament and our first round opponent in Northern Iowa later, but for now this was just a great win.

The crowd - Every Purdue fan in attendance today had a lot of fun. When I left the arena after the team was finished cutting the nets down my hands hurt from clapping and my voice was raw. I wasn't the only one, either. Most of the fans stayed for the trophy presentation and net cutting as well. In the second half everyone was on their feet. This was totally unlike a game at Mackey. It seemed like all my favorite loud, boisterous, jump-around fans were there while the stay-in-your-seat alumni that Boilerdowd loves so much stayed at home to watch it on TV. Once the team started giving us energy we gave it back tenfold. You could feel those guys thrive on it and I know the crowd gave them a huge closing boost. 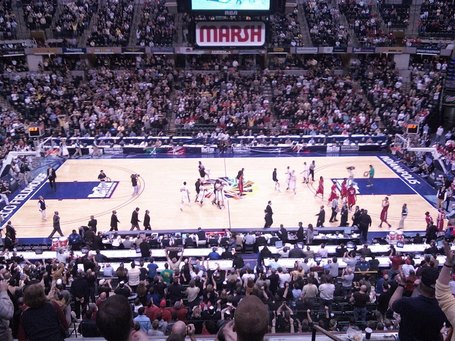 The crowd should have been able to trim some net today. They worked just as hard.

Chris Kramer - If the crowd was a nuclear reactor, Chris Kramer was plugged into it the entire second half. His steal and assist to LewJack at the 6:43 mark of the second half was probably the play of the game. He read the pass perfectly, played the lane, and had a beautiful dish to Lew Jack instead of forcing the issue himself. It came at a critical juncture where an Ohio State basket would have made things interesting. Instead, it pushed the lead to nine and we were able to hold it above seven for another four minutes. He also banked in a short jumper on the next possession hat was huge. Remember what I said last night about momentum points? All four of those were huge momentum points. Closing out the game with four straight free throws was only appropriate. 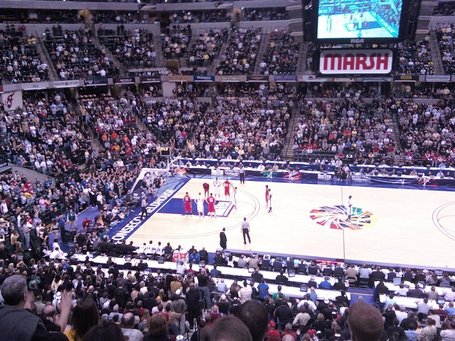 Chris Kramer clinches it from the line.

E'Twaun Moore - E'Twaun, JJ, and Robbie each made the all-tournament team. Each one was an MVP of one of the three wins, with E'twaun taking today's honors. I know he has been struggling lately, but Mr. Moore finally found his stroke at the right time. You could tell once his threes started falling he got a huge confidence boost and became much more aggressive with the ball. That is the E'Twaun we need because he is one of the few guys that can create his own shot. Away from the bigger, faster defenders of the Big Ten I expect him to have a field day now in the NCAA Tournament. It was his three at the 12:12 mark of the second half, his third of the half, that gave us the lead for good.

JaJuan Johnson - I will admit that JJ got some awfully lucky rolls on a few shots today, but we'll take them. I like that we once again looked to him when we absolutely needed a basket. We also had the confidence to go to him down low when we were looking for a clinching basket or two. Along with Calasan he took away Ohio State's interior game of Lauderdale and Mullens. Ohio State was shooting well on the perimeter, but they still need more of an interior game to beat elite teams. Calasan and Johnson combined for 21 while Mullens and Lauderdale combined for 7. That's also before you factor in our tournament's Most Outstanding Player.

Robbie Hummel - If you look at the scale to your left on the main page I think we can agree that Robbie has now reached at least level five: Dead male hooker. The kid has played hurt. He has gritted through a rough season that only makes me more excited for next season when he is completely healthy. The questions about his health with the short turnaround of the NCAA Tournament are officially answered after 95 minutes, 48 points, and 28 rebounds in three days. He wasn't as big off an offensive threat today. He deferred mostly to E'Twaun and JJ, but his rebounding was huge. I know this week could be a flare up, but I think we saw what can happen and how things are opened up when he is able to play at a high level.

Keaton Grant - I mention Keaton simply because of the stones he had for that dagger 3-pointer with 47 seconds left. It simply blew the roof off the place and sent the Ohio State fans streaming for the exits.

Everyone else - This was truly a team win. Chally had six boards and five points off the bench. He also made life difficult in the paint for Ohio State. LewJack played turnover-free basketball for 27 minutes of a championship game. He also had a key tie-up with Dallas Lauderdale that was very innocent, but Lauderdale acted like he couldn't believe the little man had the guts to grab the ball. It was a saavy play ebcause LewJack didn't really try to knock the ball away. He delicately placed his hand on top of the ball and ball only, and Lauderdale let him until the jump ball was called.Lewjack's only mistake on the day was an illadvised 3-point attempt just after that when we needed to run clock instead of rushing a three.

Marcus Green had a huge offensive putback for his only points. Even Bobby Buckets played some solid defense during his brief stint that allowed someone else to rest. We did not shoot the ball well, but everything else was flawless.

The seniors - This had to be especially sweet for Marcus Green and Bobby Riddell. They remember the losing. They remember coming to Indianapolis as freshmen and getting their heads handed to them. Bobby was actually the one that grabbed the trophy and carried it to the locker room. That had to be a moment for him that was about as sweet as his performance in the Penn State game at Mackey. As for Green, what perseverance! He deserved this day.

Perimeter defense - Diebler got loose too many times in the first half. Turner and Buford tried to repeat their performance from our game in Columbus. It is scary how we had so much trouble playing against their guards, but thankfully we won't have to see them again.

Field goal shooting - It didn't seem like it because we had 14 offensive rebounds to generate second chance points, but we didn't shoot well for most of the game. Having a sub-35% performance next week could mean an early ticket home even against Northern Iowa.

Is this a turning point? This is the first championship this still young team has formally won. It came with their 50th victory as a group, so it was a milestone in both ways. Beating Northern Iowa will set a new high water mark for wins in a season, topping last year's record. It would also give us our 11th straight opening round win in NCAA play. I am not a huge fan of where we ended up. I think a five was about a seed too low and I really don't like playing a major conference champ or major conference tournament champ in round 2. It is what it is though. If this team keeps playing like it did in Indy we can win those first two games.

I'll have more about Northern Iowa, Washington, and Mississippi State later in the week, but for now it is time to pick brackets and do ridiculous analysis. I think it is a very fair field, and the only mistake I saw was putting Arizona in instead of Penn State. I am Big Ten-centric though.

Speaking of picks, I am following in the steps of many SB Nation blogs and I have created a tournament challenge through yahoo. Feel free to sign up here and see if you can beat me. The group ID is 96124 and the password is: rails.